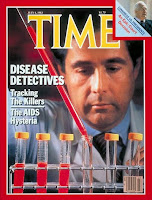 The first case of AIDS in the United States was identified in 1981. It spread to this nation from Africa, primarily through a homosexual flight attendant, and was a mutated variant of a disease apes suffered from. Since then almost 600,000 people have died of the disease in America - although always from another complication such as pneumonia - and almost 30,000,000 worldwide.

Experts estimate that 5% of the population of Africa suffers from HIV, and while recent medical breakthroughs have discovered ways to limit the disease's deadly nature, greatly reducing its lethality, it still is a terrible plague, mostly on the third world.

When AIDS was identified and its spread noted by the American officials, President Reagan was in office. He was said to be slow to respond, reluctant to do anything to help gays, and basically didn't care if a plague was killing them. President Reagan's response was called "halting and ineffective" by biographer Lou Cannon, and he was said to have been influenced, if not controlled by the "religious right" in the guise of Pat Robertson and Jerry Falwell. Allen White wrote in the San Francisco Chronicle:


With each passing month, death and suffering increased at a frightening rate. Scientists, researchers and health care professionals at every level expressed the need for funding. The response of the Reagan administration was indifference.

By Feb. 1, 1983, 1,025 AIDS cases were reported, and at least 394 had died in the United States. Reagan said nothing. On April 23, 1984, the Centers for Disease Control and Prevention announced 4,177 reported cases in America and 1,807 deaths. In San Francisco, the health department reported more than 500 cases. Again, Reagan said nothing. That same year, 1984, the Democratic National Convention convened in San Francisco. Hoping to focus attention on the need for AIDS research, education and treatment, more than 100,000 sympathizers marched from the Castro to Moscone Center.

With each diagnosis, the pain and suffering spread across America. Everyone seemed to now know someone infected with AIDS. At a White House state dinner, first lady Nancy Reagan expressed concern for a guest showing signs of significant weight loss. On July 25, 1985, the American Hospital in Paris announced that Rock Hudson had AIDS.

Recently homosexual donors visited the Obama white house with their checkbooks and gleefully posed in front of the Ronald Reagan portrait there, flipping him off. It is generally understood, especially among the homosexual population, that Reagan hated homosexuals, didn't want to do anything about AIDS, and its all his fault that it spread so quickly and powerfully.

And that says a lot about the homosexual perception of responsibility, government, and life.


Almost immediately it was understood that this was a sexually transmitted disease. It was also known to be an almost exclusively homosexual disease, spread from one homosexual man to each other, mainly in San Francisco. Intervenous drug use was eventually also discovered to be a primary cause of spreading the disease.

Eventually, it moved into the heterosexual population, but never in the degree that hysterical pundits claimed and feared it would. To this day, the disease is mostly among homosexuals and needle users except in the third world.

The truth is, Ronald Reagan unsurprisingly was a friend to homosexuals. He was an actor and in that community you're surrounded by homosexuals and tend to be more accepting as a result. Mike Flynn writes in Big Government:


Apparently they don't realize that Reagan did more for gay rights than any other President. Moreover, Reagan campaigned on behalf of gay rights before he was President at great personal risk to his future political career. In 1978, conservative California state Senator John Briggs pushed an initiative onto the state ballot to prohibit the hiring of homosexuals as teachers. Keep in mind, this was the height of Anita Bryant's crusade against homosexuals and much of the conservative grass-roots were decidedly opposed to the concept of "gay rights." Reagan had been out of the governor's office for several years and was preparing to run again for President. Support for the initiative was very strong initially and every political calculus would have argued that Reagan stay out of the fight. But, Reagan wasn't a normal politician.

Out of personal conviction that individuals should only be judged on their merits, Reagan campaigned against the initiative. He even went to so far as to pen on op-ed against it in the closing days of the campaign. The initiative was soundly defeated.

David Mixner, a leading gay rights advocate who organized opposition to the initiative was unequivocal in his credit to Reagan on the victory:


There is no doubt in my mind that the man who put us over the top was California Governor Ronald Reagan. His opposition to Proposition 6 killed it for sure.

The truths is, Ronald Reagan was not opposed to homosexuality, and was not a very socially conservative president, particularly for the times. True, he did have advisers who were strongly anti-homosexual, saying AIDS was "no more than they deserve," according to C. Everett Koop, who fought hard to raise awareness of how AIDS was transmitted and how to stop it.

But Ronald Reagan was not silent on the disease or its spread. Koop was busy early on telling people to use condoms, avoid sharing needles, and how the disease spread, as was his job as Surgeon General. The CDC released a report warning about the disease, how to prevent it, and what to do in 1981, as the government required.

The problem is that San Francisco leftists blame the government for their own behavior. AIDS didn't spread because Ronald Reagan didn't strap on his superman outfit and catch all the virii, throw them in a volcano, and hug every homosexual in the Castro District. Ronald Reagan didn't see it the federal government's business to tell people how to live or what to do. It spread because homosexuals, knowing a deadly plague was among them and how to prevent it, ignored the warnings and lived la vida loca. And the reason they blame Reagan is that the government spending didn't erupt in dumptruck loads of cash on research so they could keep living that lifestyle without fear.

The biggest problem with the AIDS epidemic is that when it became so obviously a drug-user and homosexual-sex spread disease, it became political. Identifying it as primarily driven by certain behavior meant people would think ill of those behaviors, condemning homosexuality. And that got in the way of the push to normalize homosexual activity, so it was quashed. Duane Lester reminds us of how it went back then:


Gay rights activists in government compounded the problem. Pat Norman was the Director of the Office of Lesbian and Gay Health in San Francisco’s health department. She was also the chair of the Coordinating Committee of Gay and Lesbian Services, which compared the screening of blood donors as “reminiscent of miscegenation blood laws that divided black blood from white.” They even compared it to the internment of Japanese during World War II.

This became so politicized that even reasonable attempts to control the spread of the disease were opposed. Even diseases that cannot be spread like most forms of leprosy are quarantined or even denied entry into the United States, but AIDS, which is so easily spread, was given a pass, because it would seem like evil discrimination against homosexuals. In other words, political activism actually enhanced the spread of the disease because the cause trumped human life.

It wasn't until the mid 80s that a small community with a disease had spread to the point of being a minor epidemic and was a threat to people. Until around 1985, AIDS wasn't a major issue. Most people hadn't even heard of the disease until about that time, and reporters weren't bringing it up, asking the president about it, or writing about it because most didn't even know much about it. Because of stupid, self-destructive behavior it was spreading like wildfire in San Francisco and other homosexual communities, but it was mostly isolated from the rest of the country. 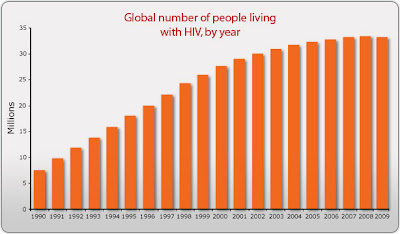 Brent Bozell writes about how Reagan signed on to plenty of federal spending on the disease:


AIDS funding skyrocketed in the 1980s, almost doubling each year from 1983 – when the media started blaring headlines – from $44 million to $103 million, $205 million, $508 million, $922 million, and then $1.6 billion in 1988. Reagan’s secretary of Health and Human Services in1983, Margaret Heckler, declared AIDS her department’s "number one priority." While the House of Representatives was Democrat-dominated throughout the 1980s, which Democrats would quickly explain was the source of that skyrocketing AIDS funding, Reagan clearly signed the spending bills that funded the war on AIDS.

Could Ronald Reagan have done more? Sure, he could have made a speech in 1981 to tell everyone about a disease that had popped up in one area of America among a small community involving behavior 98% of the population didn't engage in. But why would he? And how do you end up blaming the president for what you're doing to yourself? That's like getting mad at the governor of your state for how you pulled a muscle lifting that refrigerator with your back.

The truth is, AIDS spread because stupid people made it happen despite knowing better in almost every case. Sometimes they did it on purpose. There were horrible examples of it being spread through unscreened blood but homosexual activists strenuously opposed screening for AIDS as noted above.

And in the end, AIDS didn't end up the "new black plague" that swept across the world. It wasn't pandemic, or even an epidemic. It has remained almost exclusively within small communities driven by their stupid behavior, like Parkour specialists and broken bones. AIDS is a tragedy, a horror of watching someone wither away slowly unless they can get vastly expensive boutique drugs, and it eventually still is almost always a death sentence, either way.

But that's not Ronald Reagan's fault. Those guys should have been flipping off a mirror.

As a note, its hilarious to read about the reaction to AIDS hysteria. These days people blame it on "medical professionals looking for money" and "religious extremists" but the primary driving effort behind the hysteria was ignorance combined with political activism.

To avoid this being identified as a disease driven by homosexual and drug-using behavior, the story was pushed as being something we were all threatened by, the great looming doom that government must save us from. So it became a terrifying pandemic, worse than the black plague. And now, suddenly, its Jerry Fallwell's fault it didn't turn out that way.

*This is part of the Common Knowledge series: things we know that ain't so.
Posted by Christopher R Taylor at 8:52 AM

I remember quite well how the most rudimentary precautions were scoffed at while activists insisted that the federal government spend millions on curing a disease that affected a very small minority of the population, money that could otherwise have been funneled into research on diseases that have broad impact.