"I love Africa in general South Africa and West Africa, they are both great countries."
-Paris Hilton 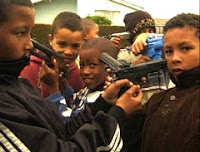 In the 1980s, the cause du jour became Apartheid and pressuring the South African government to give up white control. Eventually this was successful, whether due to American efforts or just the inevitability of time, no one really knows. I'm sure musicians and artists from the day prefer to think they had something to do with it. The movie Lethal Weapon II was particularly notable from the time, with an evil South African villain and a focus on apartheid.

Apartheid was developed after World War II, when the South African government began like many former colonies, to shift away from control by a parent state, now in ruins, and function independently. Apartheid developed under the National Party which divided humanity into several groups such as Black (African), Colored (mixed race), White, and Indian (any east Asian origin). Depending on which group you were part of, you had different access and protection under law.

The origins of Apartheid were similar to Nazi Germany's racial theories, and required all people in the nation over the age of 17 to have their race registered. If the race of someone was unclear, a government panel would determine it for you. Peoples were segregated by area, moving them into housing and regions based on their determined racial category. Marriage between various racial groups was banned by law, as was sexual activity between racial groups.

The separation went so far as to include beaches, park benches, drinking fountains, restrooms, and so on. In theory this was to preserve racial purity and control the various factions of the nation, but in practice, the effect was to give whites preferred treatment with the best of all areas and items, coloreds and Indians less, and blacks the worst. Blacks had separate bus stops, transportation, hospitals, and so on. They had to show a pass to move from where they lived to where they worked, and could travel only to one town, leaving their family in their home, and back. The tax rate for blacks started at a much lower income than whites, argued because they cost the government so much more for oversight and care, although there was no national care for non-whites.

Fears of communism which was growing in African interest led to laws banning Communism, but these laws were quickly expanded to ban any dissent and criticism of the National Party and apartheid in particular. Speaking out against the practice would get you jailed, and if you were black they wouldn't even bother with a trial sometimes for years.

Blacks were provided education, but only enough to make them skilled laborers. They were allowed self governance, under the oversight of the whites, and only in their areas. Eventually, the government created ten areas which were called "Bantustans" in which blacks were given increasing independence and self government with the idea of making South Africa whites-only and moving blacks out of it entirely.

Blacks were stripped of the right to vote for South African politics, and a pass was required to move from the Bantustans into South Africa. The National Party passed laws to ensure it would always enjoy a strong majority in the parliament and retain control of the country. Further, coloreds who previously could elect a handful of white representatives were stripped of this ability as well, in an effort to make South Africa whites only. Asians never were able to vote.

Blacks could run businesses in White South Africa, but only with a permit. In theory, blacks had all the same stuff and rights whites did, but always to a lesser degree. There were black beaches, black universities and hospitals, black swimming areas, etc, but always inferior and always restricted to black areas instead of South Africa. In short, being non white in South Africa made you a second class human, you had everything whites did, in an inferior, shabby way, but no rights to make things better or influence the white areas.

Whites were effectively immune to Black, Colored, and Indian accusation or efforts to change. Whites controlled the whole region, and while the independent areas were intended to be separate from South Africa entirely, they never reached that point and always were controlled by the white government.

Now that all this racial law has ended and blacks control South Africa, everything is better, right? Not so much. In fact, in some ways, blacks were better off under white Apartheid rule.
The thing to understand is that the National Party was racist and dictatorial, but was never a Nazi tyranny and as dictatorships go, it was pretty mild. They didn't haul people off and torture them to death, wipe out whole areas, kill everyone who disagreed with them, or have a horrendous secret police that encouraged people to turn neighbors and families in for questioning the government. The Soviet Union, for instance, was much worse.

That doesn't mean things were nice in Apartheid. Rights were heavily restricted, even for whites. You couldn't actively criticize government policy, you couldn't throw the governing party out of power, you couldn't marry a non-white, and so on. And as you went down the racial chain, your rights got more and more restricted. I don't want to give anyone the impression that things were great; I would have despised living in that situation and would have struggled against it.

What I'm trying to do here is emphasize the distinction between what you could call a "hard" dictatorship like Pol Pot in Cambodia and a "soft" dictatorship like in Mubarak's Egypt or South Africa. They're both still dictatorships, but the hard version is much more horrible and bloody.

The problem is that instead of a steady, long-term transfer where blacks became more involved in government and society, they just swapped over in a matter of months. Because black experience in government was largely limited to tribal chiefdoms and the education level was minor, none had any experience or real understanding of governing a country.

The Ambassador to the United States was told he had to train his replacement and the entire staff in three months, then retire when the National Party government ended. He did his best, but you cannot teach someone decades of experience in a few months, particularly to someone with the equivalent of a sixth grade education.

As a result, the country's functioning which was fairly smooth and efficient (and had a pretty solid economy) has crumbled and things are not going very well. Electricity is less reliable, roads are falling apart, the education system is in terrible shape, and so on. Essentially the infrastructure such as utilities, sewers, and roads, is not being properly maintained.

Also, while the National Party had dictatorial control for decades, the end of Apartheid didn't end one party rule. Ever since 1994, the African National Party has been in charge. The election held in 1994 its self was questionable.

In A History of South Africa by Robert Lacour-Gayet, he writes that the EU report admitted that there were widespread irregularities. In fact, the western world was so interested in the election that they delayed releasing a report for two years. The report criticized the lack of preparedness, the lack of safeguards against fraud (particularly in the counting process), and noted that in many cases, "no international observers had been allowed to be present at the crucial stage of the count when party representatives negotiated over disputed ballots."

Unfortunately for the bulk of South Africans, things haven't gotten any better. For Whites its gotten a lot worse - they not only have lost preferred status, but in some cases are now being retaliated against for things that happened in the past. Further, because the police are ill trained and understaffed, they can't protect the citizens like they once did. And finally, corruption has become more wide spread, and there are even gangs of blacks moving through poorer areas simply taking what they want and beating or killing anyone who resists - or even if they don't resist.

For blacks, things have not gotten better either. True, technically they have equal access to the country and can vote and be in government - in fact, no whites are in South African government to the best of my knowledge - but they have less police protection, the law is no better at protecting them than before, and the overall state of the country has collapsed. Before, all they could get were menial jobs. Now they are lucky to get any job. The overall unemployment rate is over 20% and for young people it is over 50%. Even worse, old tribal hatreds and brutality, suppressed by the old system, are returning. Zulu versus Hutu versus Xhotas, and so on all are ancient hatreds and feuds which show up in more organized form, with a Zulu president controlling the military and police.

The South African government had a policy of taking land from rich whites and giving it to blacks in the name of fairness and compensation, but more than 30% of these lands have been sold back to the original white owners. The blacks know nothing about farming or running these properties, and aren't interested - but they like money. Whites make up around 10% of the population of South Africa but own 90% of the land, and the African National Party promised to 'redistribute' the land more 'fairly' but its not quite working out as planned. Even with farms that blacks keep, 90% of them fail because of a basic lack of understanding how they work and how to run that big an operation.

The government is notoriously corrupt, with the wife of a high ranking official jailed for smuggling cocaine, dissenters silenced and jailed, those connected with the ruling party have special privileges and even can ignore many laws. The very rich are still very rich and enjoy all the privileges of that wealth. The poor are even more poor, and the middle class is disappearing into poverty. As Ulrich Fitchner writes in Spiegel:

More than 50 murders a day are committed throughout the country, which comes to more than 18,000 a year, a woman is raped every few minutes, and someone is robbed every few seconds. In Germany, which sees 2,000 murders a year, such numbers are inconceivable.

Stories of horrors awaiting whites thrown in prison are mentioned in a few sources, from chain raping to death. The sad fact is, that like almost all of the former colonies in Africa, they were better off in some ways under their colonist rule, as bad as it often was.

In short, Apartheid was bad, but the situation now is worse. Just because you throw off once tyrant doesn't mean the next one is somehow superior. But the western press tends not to want to cover this because it violates the narrative of heroic oppressed blacks overthrowing the evil white tyrants. Like Egypt, the fantasy of the revolution eclipses the reality of the aftermath, and they'd just rather not pay any attention to the ugliness that has followed.

Apartheid was wrong and cruel, it was a stupid system by a small group of people desperate to maintain power and avoid the local people. It didn't work, and it was inevitable that it would collapse. The problem is that now South Africa - once the richest and most advanced nation on the continent - is turning into just another brutal African nation. And nobody wants to hear that because it hurts what they've always been told about the country.

This is part of the Common Knowledge series: things we know that ain't so.
Posted by Christopher R Taylor at 8:36 AM