"We don't like what he's doing, but we understand it" 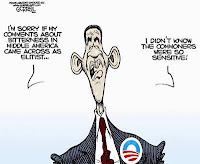 President Obama has spent months flying around the country shaking hands, talking to people, and raising money for his reelection. They bragged about how they'd raise a billion dollars this time and bury any Republican in an avalanche of campaign spending last year, but that isn't happening so now the narrative is how evil the Republicans are for raising so much money.

President Obama has gone to more fundraisers than any president before him, and he's going to such ludicrous extremes that people are mocking him, such as the embarrassing "wedding registry" fundraiser idea I mentioned in last Friday's Word Around the Net roundup. If you look at the president's regular schedule, conveniently given by White House Dossier, the man spends more time fundraising than any other activity except sleep.If the Obama campaign isn't frantic and desperate for cash, they're doing a fair imitation of it.

And that fundraising is focused on the wealthy left, especially celebrities. President Obama isn't visiting America, he's sticking to Hollywood, New York, and other hot spot leftist pockets. He's raising money from the elite left and America-bashing celebrities, from fashionistas and movie producers. In other words, in direct contradiction to the story in his last election (the false, but often-believed story) of getting the bulk of his cash from small donations, he's just ignoring those and going for the big money.

And even celebrities are becoming uncomfortable with this state of affairs.

Some of the president's most ardent entertainment industry supporters quietly tell The Hollywood Reporter that while they realize he needs to deploy all of his weapons to compete with deep-pocketed Republican super PACs, they fear the increasing reliance on stars and celebrity contests could backfire with swing voters and mobilize the right.

Reaction was particularly strong to the $40,000-a-plate dinner co-hosted June 14 by Sarah Jessica Parker and Vogue editor Anna Wintour with guests including Meryl Streep, Aretha Franklin and Bravo's Andy Cohen. Critics say the tony, heavily promoted event­ -- Parker sent an e-mail to supporters promising the evening would be "fabulous," and Wintour posted a video online urging supporters to enter a lottery for two tickets -- risked creating the impression of an elitist, out-of-touch candidate in a period of ongoing distress and growing economic inequality.

"It's a mistake," a veteran Hollywood exec says flatly of the event, which the Drudge Report headlined "Checks in the City." The exec adds: "He's supposed to be a man of the people, and he's hanging out with Anna Wintour? Is he trying to turn the election into a celebrity reality show?"

This would be the dinner he said that he sometimes "forgot how bad the recession is" both contradicting previous statements that the economy is doing better and there is no recession... and demonstrating he's out of touch with reality with Americans across the nation.

Democrats claim Obama has no choice, but he didn't need to do this last time around which means that something other than mean Republicans raising too much money is going on here. First, it means that President Obama isn't popular with the general public like in 2008, and second it means that corporations are betting on Obama losing reelection. Because they gave to Obama far more than they did McCain in 2008 - they want to back a winner so they have an inside with the guy who is in power.

But I think there's something else behind it. Look at the actions and behavior of President Obama and his wife since he's been in office. Posh vacations at super rich hot spots, trips to Spain and Paris, movie stars and sports celebrities over weekly for parties, hanging out with stars and athletes. I get the impression that President Obama is kind of a gawky, geeky guy who is living his dream now. He's partying with rock stars and basketball players. He's going all the rich places that rich people go in the news.

He's living out what he always wished he could and envied in the evil 1%, and now that he's there, he's going to do and live it all. His wife gets specially designed couture clothing, he gets $40,000 haircuts. They fly to the Hamptons in separate jets, they hob nob with the wealthy and the powerful. This doesn't seem like a job to these folks, it seems like they are living out fantasies they have had their whole lives. They're acting like a trailer park couple that won the lottery.

And I think this focus on the celebrity and upper crust rich leftist community isn't driven by desperation so much as just a love of hanging out with stars. They're star struck celebrity worshipers, going where the dream is made. They aren't with George Clooney and Mariah Carey because they can't find money anywhere else, they're doing it because they're star struck. At least that's how it looks to me.

And this narrative of the mean Republicans raising so much cash he just has to fly over most of America and ignore it to eat Wagyu beef with Matt Damon and Alicia Keys is just nonsense. Not only would they have no problem with the amount of cash and disparity were they the beneficiaries of it, they planned on it and announced they'd have a huge fund last year.

This is what he likes, this is how she wants to live. This is what they feel entitled to and think they deserve. And the cruel, heartless American people want to take all that away, how mean could they be?
Posted by Christopher R Taylor at 8:16 AM