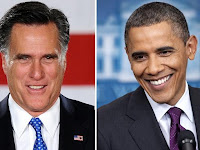 At this point, I simply do not see President Obama winning reelection. He could, but the odds aren't in his favor, let's say. It isn't that Mitt Romney is such a winning guy and so attractive a candidate, its that Obama is lousy.

The reasons Obama is in trouble are many, such as the terrible economy, his failure to carry out what he campaigned on, the reversal of his "lets get along bipartisan moderate" image in 2008 to a bitter and sometimes mean jerk, and his general incompetence in the job. Let's face it, he's been terrible.

Last time around candidate Obama skated by on a general dislike of Republicans, a slogan-based campaign that allowed voters to project what they wanted Barack Obama to be on his mostly blank slate, and a horrible opponent in John McCain. The ecstatic, worshipful media probably didn't hurt much either. And the idea of voting for the first black president had a lot of attractiveness to it as well.

But none of those things help him this time around. The media is tepid in its support, his opponent isn't despised by his own party, President Obama isn't a blank slate, and the slogans turned out to be lies. Republicans are even doing well in the public eye. Despite that, though, he could win, but he is running a lousy campaign.

President Obama has a few scant months to turn this around, and he might, but so far he's just making all the wrong moves. I'm not talking about gaffes like "the private sector is doing fine," although that doesn't help. All it would take is a focus on foreign policy, showing strength and protection (he's done fairly well there, at least on the surface), an emphasis on his family and just avoiding the perception that he doesn't give a crap about Americans or America.

Flying around to fundraisers with vastly wealthy celebrities and mentioning you forget how bad the economy is at a $40,000-a-plate dinner is devastating. Going on multiple vacations a year to golf with big shots at resorts most people can't even afford the brochure for hurts his image badly. His wife in particular hurts him, making the Obamas seem like french royalty before the revolution. They seem almost totally out of touch, and have almost no popular appeal whatsoever.

It wouldn't take much to turn that around. Just a bit more modesty, just a little more effort to actually reach out to ordinary folks, just a bit of apparent sacrifice would go a long ways. Golf a bit less. Don't go to the Hamptons on vacation this year. Visit people in places that won't make you a lot of money for the campaign. Act like you at least care a little about peoples' lives.

It isn't that Mitt Romney is cruising. He's up against a tough sell: the incumbent always has an easier time of it. Frankly a lot of voters are incredibly uninformed and will tend to vote for the guy already in office. At least you know what he's like already, he's safe. Women especially tend to be risk-averse when it comes to elections and leadership, and Mitt Romney isn't very well known to the public, in part because he can outspend Obama 3:1 on ads and publicity and never match 4 years in office and a supportive press.

But in the end, I think the polling data is going to shock pundits, because a lot of people who claim they like Obama will vote to replace him. Because you can like someone just fine, and still think he needs replacing in a job. And not a few people are inclined to claim they like Obama to avoid seeming racist.
Posted by Christopher R Taylor at 7:15 AM

The only thing that is going to matter to this MTV type generation is the last thing that is trotted out of the tent the week to few days prior to the election. People seem to have awfully short memories.

I still say it is going to come down to a few key states, and if the election were held today, Romney probably would not win... so he still has an uphill struggle, but he is making good gains.

Obama still has a solid lead in PA, MI, and MN (all states I was hoping Romney might have chance to flip). Romney has gained in WI and VA but is still reliably outpolled by Obama across multiple polls.

But let's say he flips ALL the states mentioned in the previous paragraph, plus give him either VA or WI... even then, he still cannot win without Ohio. And Ohio is still anybody's ballgame.

So like most modern elections, this is going to come down to Florida and Ohio, and unfortunately there still isn't good evidence that Romney has any better than even odds to win either state.