"This is not my opinion, this is facts." 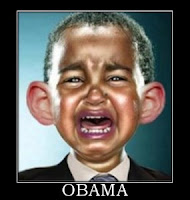 President Obama gave another speech last night, where he was, according to even the leftists who watched it "overlong" and just the same thing he's been saying all along. I think people got kind of tired of President Obama's speeches about in late 2009, partly because he just keeps giving them and partly because his tone went from fresh, hopeful, and centrist to increasingly mean-spirited, partisan, and dull.

Most of the speech was rehash, and the parts that weren't were outrageous claims of what Republicans will do if they win the presidency - cut everything deeply, get rid of entire agencies, etc. Sure, I'd like to see that, but I think history has taught us that's just never going to happen. What's odd to me is that the speech seemed more like an appeal to his base - trying to get people who hate Romney to vote for him - than the American people as a whole.

Which begs the question: is he really that concerened about getting his guys out to vote, or is it something else? Because usually that kind of thing is an attempt to stir up and excite your voters, to get people you know already are on your side to get motivated, to make sure they don't stay home discouraged. Yet its June and he's still talking to his base?

I guess there are a couple of possibilities here. The first is that he's working on a predetermined strategy: from x month until y month, focus on the base, to get them moving, then move to the general population after that until the election. That's possible, but if so it shows a certain lack of flexibility.

Another possibility is that this is more about getting wallets opened than trying to convince the public. Most of the speech was about how Bush ruined everything (he even said it will take ten years to turn the economy around), how Republicans are evil, and how Romney wants to turn America into a 3rd world nation, and so on. Most of President Obama's activities so far have been fund raising, he spends hours nearly every day doing fundraisers, flying from place to place giving speeches, shaking hands, and doing dinners. So maybe this is just another one of those, because he's not raising more money than the Republicans.

And a third possibility that occurs to me is that the president, and his advisers, are so isolated and cocooned that they think that this appeals to all Americans, not just their base. In other words, they have only leftist friends, read only leftist publications, hear only left-leaning news reports, hang out with MSNBC types, reject anything which remotely questions that worldview as evil and biased and controlled by the Koch brothers, and as a result are unable to understand that not everyone thinks that way.

I doubt that last one is true, given the president's position, but you wonder sometimes.

The thing is, President Obama has had almost 4 years to fix the mess he was handed by the Bush administration and the previous congress (which he was part of, incidentally). He has had almost a full term to do his job. The job isn't getting done, and claiming it was so hard four years isn't enough just doesn't sell his position very well to the public. I don't think people are going to give him a pass because its hard, especially voters (like me) who are old enough to remember Reagan's turnaround of the Carter recession. By now things should be roaring along and nobody expects anything to get better for years to come.

Maybe that's unfair. Maybe he's right, it would take years more to fix the economy. Maybe things are such a mess that it would take a decade to slowly rebuild things. The problem is that doesn't really inspire any sort of confidence in voters. Saying "its haarrrrd, that Bush guy did it!!!" doesn't strike people as leadership or ability. And given the incompetence with which President Obama has handled his job, I think people are ready to try someone new in the job. This last guy was a bad hire.

Oh by the way, if you wanted to attend the speech President Obama gave?

You had to show photo ID.

But voting well that's just unreasonable to expect ID for.
Posted by Christopher R Taylor at 9:15 AM