"All right, fellas... let's go and say a prayer for a boy who couldn't run as fast as I could."
-Father Jerry, Angels with Dirty Faces 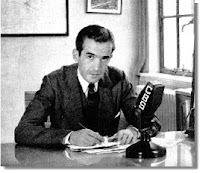 I'm running a role playing game set in 1938, starting out as a pulp action game that will morph into a golden age superhero campaign. As part of my research I did a lot of studying of "current" events then, such as what movies and radio were popular, what books were selling, what was going on around the world, what slang was being used, and so on.

Thankfully I've read a lot of pulp and mystery fiction from the time period and am quite familiar with the era, so it wasn't a terrible burden to catch up. And the internet has plenty of resources such as timelines, slang guides, and so on to help learn the time period.

But something I came up with to help the players was a list of current events to help put the time period in context. My idea was to give them the tools to aid in placing their imagination in that era, so I came up with a sort of time line. Except to make it fit and make sense, I indicated the years as if they were current.

So assuming this year was 1938, if something happened in 1927, that would be 11 years ago. in our time, that would be 2001. By doing this I think it helps put things in their proper place. Its a bit abstract to say the Great War (what we call WWI) ended in 1920, but to say it ended 19 years ago in 1995 makes it more understandable. That's just after the fall of the Berlin wall, in President Clinton's first term. Coolio had just released "Gangsta's Paradise," The first Toy Story movie came out and Pierce Brosnan debuted as James Bond. The OJ Simpson trial took place, and Yahoo was founded in Santa Clara, California.

So someone your age would have that recent a memory of the events around the end of WW1, for example, that you have of the mid 90s. Here's what the rest of the timeline looks like:

What struck me as I worked this up is how many of the events of this time period were so pivotal and incredible. Mind you I left a few out (spoiler: such as the Hindenburg disaster, for instance) so that our heroes can be involved in them, but this is the bulk of them. This is the time period The King's Speech took place in. This was when many of the greatest public works projects in American history took place.

They built the Hoover Dam, the Empire State Building, and the Golden Gate bridge back then without unions, without computers or lasers, without much in the way of safety guidelines. This was the time period between two of the most horrific and destructive wars in human memory, a short gasp of breath between the carnage. It was the great depression, and yet somehow so much was accomplished.

Oh, the popular media of that day? Bringing Up Baby, Angels With Dirty Faces, The Adventures of Robin Hood, and Holiday.

On the radio, The Shadow was popular, Edward R. Murrow did his first radio broadcast, the soap opera Woman in White began, Information Please! was very popular, and Blair of the Mounties thrilled audiences.

And FDR was taxing and spending the depression into lasting even longer and getting even worse.

Some things just keep coming around.
Posted by Christopher R Taylor at 9:59 AM