WHO COULD HAVE SEEN THAT COMING? 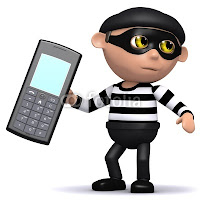 The first time I saw an ad for On*Star where they could shut your car off, track it, and even unlock the doors by a phone signal, I thought "wow, what a boon for thieves." It didn't make me think that would make me more safe, I saw an obvious back door wired into your car for car thieves to use and government to abuse.

Then came ads touting how you could use your cell phone to check your house out, look through cameras, even unlock the place. And I couldn't believe anyone would be stupid enough to even consider doing so. It wasn't that long ago I saw a website that showed how to get into peoples' home security systems over the internet, because most people either never change the login and password or use idiotic ones like "password." But its easier to remember, Christopher! Yeah, and so is a combination lock of 1-2-3-4, like too many people use on briefcases. Why even have security if you're going to make it so easy.

But letting people call up their system on a phone and check it? Even shut off your burglar alarm with it? Are you kidding me? Well shock of all shocks, we get a news story from Cleveland Ohio where in a totally unexpected twist... hackers are using the internet to access webcams. Who could have possibly expected that inconceivable turn of events?

“There’s a whole underground on the internet that does this sort of stuff, so it’s basically an arms race,” said Feross. “There’s the hackers on one side trying to figure out new ways to exploit software and there’s the companies on the other side trying really hard to patch-up their software and make sure it’s not vulnerable to this type of stuff.”

Feross found the loophole in Adobe, which is used by millions of people around the world.

“Any type of hacking, any type of unauthorized use of a computer – or computer system – can be considered a crime on both the state and federal level and it could carry with it serious consequences,” said Frey.

If they get caught, that is.

Guess how useful it is for a thief to look directly into your house at any time to see when you're home or not. Go ahead, give it some thought. The same people who buy special gadgets to fake being at home with lights turning on and off and automatic sprinklers are giving thieves an inside view of their home. This isn't science fiction, its not even that hard to do.

Why on earth would someone be dumb enough to do this? Because they don't understand how this stuff works, are fascinated with phone gadgets and applications, and think it makes them more secure and safe! And in the process its like handing some random dude the keys to your home.
Posted by Christopher R Taylor at 10:51 AM