"Shut up you hater!!!!"
The recent North Carolina marriage bill passage has filled the internet with snide remarks, slurs against the south and mockery. The previous 31 states that did the same thing are largely ignored, but now with the ascendency of social media and the presidential election, the attacks are rampant. Hicks, losers, southern trash, backward Bible thumping fundamentalists and so on.

The thing is, a lot of these attacks are a bit poorly thought out. Consider this one: 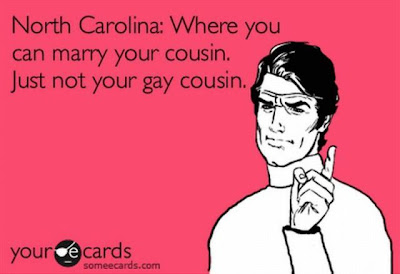 So... you think marrying a cousin is sick and weird and wrong, but marrying another guy isn't? That's where you've gotten, young America? You are repulsed with the idea of marrying a cousin but not with a guy marrying a guy? You think the former should be illegal but not the latter?

The thing is, 25 states in America allow you to marry your cousin (sometimes with restrictions, such as "not first cousins), including states like Hawaii, Colorado, California, and New York. 25 states don't allow it, including Arkansas, Mississippi, and West Virginia. Geneticists actually point out that the chances of child genetic damage between cousins is only about 2% larger than the random population, and with second cousins or beyond the risk is no larger.

But that isn't really what this is about. In a triumph of Alinskyite cultural warfare, homosexual activists have managed to get a large majority of the young population to assent to the idea that homosexuality isn't just normal and ordinary, but even laudable and something you appreciate. How they feel about this or think about it personally or when confronted with a couple guys kissing or making out is perhaps a different story, but they'll say what they've been trained to in school and by culture.

The peer pressure is enormous, the culture continually portrays homosexuals as not normal but extraordinary: they are smarter, richer, better, more attractive, great cooks, charming, witty, always the good guy. Always. There was a time until around 1990 when you'd see homosexual bad guys in popular media, but no longer. I think the last one was The Crying Game in 1992. This wasn't a long and careful case made by reason and objective ethical principles, it was just pressure and attack on any who disagreed. And its been enormously successful.

So much so that people think you're weird, wrong, and perhaps even dangerous if you now think that the idea of homosexual marriage is odd and mistaken. That if you think we should not radically redefine a millennia-old, foundational human institution to please a minority of a tiny minority of people there's something wrong with you. That you probably want to beat up homosexuals, are a bigot, and likely secretly gay yourself.

So let me see if I can make sense of this for people who've not spent a lot of time thinking this through or heard any sort of dissenting point. Stay with me here.

Even if you're a really "progressive" and open-minded sort, you probably have a problem with an adult marrying a child. That's considered shocking and awful these days, with most people thinking its not just bad and weird, but should be illegal.

OK now think about the idea of this being made legal. Consider your reaction to it, your gut level response and what you'd say if someone pushed this as being not just reasonable but completely proper and a cruel violation of human rights if it isn't allowed. Someone mocking you for thinking its odd.

That's what its like for someone who opposes homosexual "marriage" today. You're surrounded by people who think something not just outrageous and weird but wrong should be made legal, defended by the law, and subsidized by the government. They think that so strongly they attack you personally for disagreeing, they think that you are the weirdo and that you have ethical problems for daring to hold this position.

And then they bring up the usual arguments: what can it hurt? Who are you to deny their love? You probably don't even know any people like that, they're nice people, they aren't monsters! How can you impose your morality on them, stop trying to make this country a theocracy! Explain to me why this is wrong and bad! Marriage doesn't mean anything now anyway, you are stupid and lame for saying this will hurt marriage. It is cruel to children to deny this because its violating their rights to openly love who they choose.

Now at this point people start attacking me for saying that homosexuality is like child molestation, which is a blatant deflection. Its probably not intentional, but they are likely unable to actually formulate an actual rational argument, so they offer this instead as an attempt to put their opponent on the defensive and stave off doubt. And while, yes, homosexuality is an aberrant perversion just like molesting children, that's not the point, and I suspect they know it.

The point is this: this is something I know to be not just wrong but bad for culture and a serious mistake to do. Even if you cannot refute the arguments of the culture in terms they understand or will accept, you still know it to be wrong and the pressure of the world around you causes you despair for the future of the nation. Because trust me, every argument you have against a certain perversion, someone will come up with a counter argument.

Take the "too young" argument. This is how it would be attacked:

Who are we to decide when a child is unready for a decision like this? Children have been married very young in the past and we built a civilization around it. Young people are even more sophisticated, especially about sex, these days than we ever were. The only reason consent is prohibited to children is not an objective, absolute rule, but because of the way the law is now structured, and that's what we're arguing is a violation of rights and should change. Who are you to say that someone's love is wrong? These children are happy, obviously if someone in a relationship doesn't want to be there that's bad, but that's true in any relationship. Society is treating age-different relationship as a second class citizen, how can we jail people for their love?? Besides, its none of our business.

Notice: there's never an argument for why society should do this, just an assumption that it is good and a civil right, that by definition things which make people happy ought to be permitted and even supported. Again, the same basic structure of the homosexual marriage advocates. Any damage to society or the economy is brushed aside as irrelevant or not significant enough. Then you're attacked as a freak.

Now I can come up with a good argument why this is wrong and why children should not be sexually active but all of it requires the person to be open to discussion, honest about what they are saying, and willing to examine history and society's damage from the practice in question. Sort of like homosexuality. But that's not what you'd get, or get today. You'd get memorized arguments, distortions of history (Greece built a huge civilization with open and common homosexuality!!), and personal attacks.

And over time, as I keep saying, expect that exact thing to happen. And then finally many of you reading this will find yourself finally on the side I'm on now, staring at the world in horror as you watch evil become good, good become evil, and the culture you live in and love being deliberately corrupted by people who think you're a monster for trying to stop it. You'll find yourself yelling "enough!" to people for whom there is never enough. You will say "no further!" to people who believe that progress is infinite.

And somewhere in the back of your head, maybe you'll remember this and hopefully begin to reconsider some of the things you used to laugh at me for holding.
Posted by Christopher R Taylor at 8:30 AM