"My power is to look fabulous!"

Superheroic stories are inherently conservative by their nature; they focus on justice, the right use of force, the certainty of absolute right and wrong, the responsibility to use your abilities to fight evil, and the willingness to do without personal acclaim to do right. The Sam Raimi Spider-Man movies covered these themes quite well, with the second in particular standing out: do what is right instead of following your dreams. Think of others before yourself.

However, that hasn't stopped leftists from trying to make the stories fit their ideas. Many of the artists and writers of the past in comic books were left leaning but many were also on the right such as Steve Ditko who was a huge Ayn Rand absolutist. The editors tended to be less political and more conservative in the past, but stories sometimes would be pretty left leaning at times, and more right-leaning.

Lately, however, the left seems to dominate the editorial and writing at the big comic houses such as DC and Marvel. And that means their worldview is at odds with the basic content and concept of their publications. I've written about several stunts in the past that comics have pulled. The Ultimate Spider-Man comic has a half-black, half-Puerto Rican gay guy instead of Peter Parker. Captain America fought the Tea Party in a couple of comics. Superman renounced his American citizenship in a "what if" backup story recently. Captain America several times in the past has had problems with US policy and even gave up his flag-based costume to become "Nomad" in the 70s for a few issues because of that. The most recent Bat-Girl is a red headed lesbian.

Now we have the most recent development in this cascade of political correctness. DC has announced one of its main characters is going to "come out" and admit they have been homosexual all along. This isn't story-driven, it isn't a natural outworking of the character or some attempt to create a fascinating narrative. And it isn't new (Marvel did that in the 90s with a member of Alpha Flight called Northstar).

They're doing it because of pressure from fans and colleagues, as Rich Johnson writes at Bleeding Cool:

One question asked at the DC panel today at the Kapow comic convention in London, was about DC co-publisher Dan DiDio’s interview with The Advocate. Specifically over the decision not to change any character’s sexual orientation when relaunching the DC Universe. At the time Dan stated they would introduce new LGBT characters rather than switch orientation, but the question asked why DC would switch race, size, age, all sorts of identifying features, but not orientation.

Surprisingly, Dan stated that they had changed DC’s policy in this regard. And they ae about to reintroduce a previously existing DC character who was previously straight and now will be “one of our most prominent gay characters.”

As Senior VP Sales Bob Wayne explained, just like the President of the United States, the co-publisher’s policy on this “has evolved.”

Not to be left out of the publicity, Marvel announced Northstar's engagement to a dude named Kyle on The View. Gay, its the new black! Except it isn't really all that hip except to hipsters and leftists. Most people read comics for the stories of action and adventure, not the sexual proclivities of the characters involved.

DC only has a handful of major characters, and some of them are pushing it a bit to call them "major." There's Superman, Batman, Wonder Woman, and the Flash, then you get to a bit second-tier where you have Green Arrow, Green Lantern, and that's pretty much it. Sure there are guys like Martian Manhunter and Aquaman but they aren't really top end main characters and not many people have actually heard of the Manhunter outside comic book lovers.

So there's not a lot to pick from there. My best guess is either Green Arrow (a little too on the nose for a guy named Oliver Queen, but he's a raving hippie) or Wonder Woman (lives on an island exclusively populated by men, last real relationship with a man was in the 50s). I'm leaning more heavily toward Wonder Woman because her comic doesn't sell all that great and needs a big publicity boost. Plus, comic fan boys won't be offended and upset by a lesbian like they would "gay Batman."

Whoever it is, don't expect it to last any longer than sales support it. Superheroes die, change color, change names, get replaced by another person, get paralyzed, etc and keep coming back the same. Hal Jordan as Green Lantern went berserk, killed millions of people and tried to destroy the universe, then went back to being Green Lantern. And if the buying public doesn't really like the change or doesn't support it by purchases past a few initial curiosity buys, it won't stick.

And all this is due to a desire to be politically correct and get publicity, jumping on the President's homosexual "marriage" bandwagon which is breaking down and going down a side street from the rest of the parade. Its not about story or plot or heroism or action or justice. And that's the problem with far too many modern comics: they've turned from heroes into soap opera figures with costumes who go out and do bloody, violent vigilante things without clear motivation or a sense of justice.

Unless its "social justice" 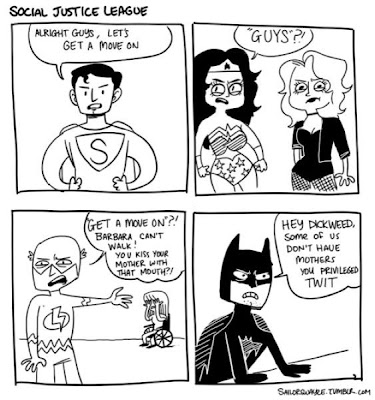 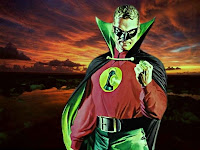 *UPDATE: I was wrong. Apparently Its the Green Lantern. No, not that one, the original Green Lantern from the 40s, Alan Scott. I liked him a lot more than the modern one, there were no goofy blue aliens or stupid corps, just him with a ring and a lantern. And his weakness made more sense too: the ring was powerless against natural objects, those made of wood.

He's an old man now, I'm not sure what his status in the new rebooted DC universe is, but he was called Sentinel and had his powers innately instead of from a ring. He was the father of Jade, who had innate ring powers as well (and green skin). Presumably they carried that over into the reboot as well. So they cheesed out, they picked a little known character who is too old to really matter. They can't even get their politically correct pandering right.
Posted by Christopher R Taylor at 7:26 AM

I blame Image for all that is bad in comics nowadays.