"This so-called balanced approach—some spending cuts for large tax increases—has been proven to be a recipe for disaster by economists. It fails to stabilize the debt, and it is more likely to cause economic contractions"

While I was writing for the Washington Examiner, I did a piece on compromise and not expecting too much from the GOP congressmen elected in 2010. They only controlled the House and could not ram anything past the Senate or the president. So I argued that the best they can offer right now is compromise, to get some of what they want done, even if its not the best.

Politics, many have noted, is the art of compromise. You cannot get all of what you want ever and because you must work with people you disagree with, often you have to take at least some of something you particularly don't like. That's the nature of the business and it is unavoidable.

However, that brings us to what compromise consists of and where we are today as a country. Compromise necessarily means that each side gives up some of what they want and gives the other side some of what they want in order to forge some sort of solution. This is how budgets have been made since the beginning of the country up until about 3 years ago when Harry Reid decided to ignore the constitution. And since Nevada reelected him anyway, why not? There aren't any consequences to lawless behavior in Washington, apparently.

After over a hundred years of the left pushing the country ever further away from the vision of the Founding Fathers and the limits of the US Constitution, you have to question what exactly compromise must consist of. If the federal government is to be contained within its proper legal and constitutional boundaries, then a massive shift has to take place to reverse decades of legislation and policy making.

So the question becomes "how do you get the left to compromise," not "what can we compromise to achieve our goals?" Because at this point, we're like a man who's had his house cleared out in a robbery and his savings stolen. The robber has come back for more and we're trying to work out a deal. In the situation we find ourselves in, the compromise cannot be "what more will I allow the left to do," or to put it another way using the analogy of the robber, the choice is not between "how much of my new paycheck will you now take" but "how much of my stuff will you give back?"
Because moving the country any degree further away from the constitution is unthinkable, and impermissible. The left does not compromise by doing this, they get exactly what they want, if not in as great a degree as they desire. And the right gets nothing of what they want except slowing the damage.

Real compromise would consist of how much the left gives up to return the nation to where it was always supposed to be to begin with, not moving it further away, but to a lesser degree. The damage has to be reversed by law and breaking the law just a little bit more is not going to help.

Let me illustrate this by showing the situation in Europe. There has been a big push for "fiscal austerity" on the continent in response to the financial crisis and the near collapse of the EU (something I'm sure is on its way in any case). Governments began to push for "austerity" and asking for the people to do with less because the plain fact is they could not afford all the free things and socialism they'd been handing out all this time.

But when you look at the actual numbers, this "austerity" looks remarkably inaustere. Here's how spending went over the last few years in several countries who implemented these plans: 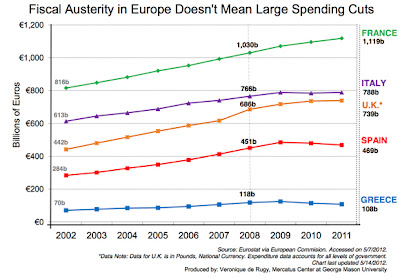 Other than Greece, they all raised spending during this time of "austerity" which started in 2008. Spain at least shows a pattern of slight decrease, but look at the difference overall. Greece lowered their spending by about 9%. From 118 billion Euros to 108. This isn't budget slashing, its a slight decrease. And others such as the UK, Italy, and France all increases spending, sometimes by a huge amount.

Fifteen TRILLION dollars in debt is too much. The budget, such as it is, is too large. The government is too big, spending too much, and cannot be allowed to get even bigger. There is no compromise here except in how much it gets cut back, not in how much it grows. Not with any shred of decency, reason, and integrity.

And there's just no hope that any congress we have today or are likely to get in November will come even close to that understanding. Getting congress to cut anything - real cuts, not "reducing increases" - is like getting a junkie to use just a little bit less.
Posted by Christopher R Taylor at 8:17 AM