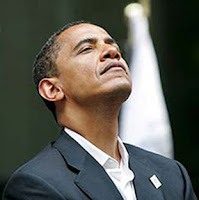 Sometimes something happens that is so astounding it is difficult to believe could happen. I read about this last night and wanted to post on it then but I have kind of a rule to keep my blogging on a schedule and I rarely break it. President Obama's staff is editing the biographies of previous presidents on the official White House website and injecting Obama into them. For example:

On August 14, 1935, President Roosevelt signed the Social Security Act. Today the Obama administration continues to protect seniors and ensure Social Security will be there for future generations.

This is not a hoax, you can go to the site and see for yourself. I was truly hoping this was fake, some prank by a clever fellow but its not. They've gone far beyond the parody horizon, its nearly impossible to satirize this administration. It seems like there's something basically juvenile about Democratic administrations, like the Clinton team removing "W" keys from all the computers when they left (and trashing the place).

Early in his administration, President/Professor Obama repeatedly referred to “teaching moments.” He would admonish staff, members of Congress and the public, in speeches and in private, about what they could learn from him. Rather than the ideological or corrupt “I’m above the law” attitudes of some past administrations, President Obama projected an arrogant “I’m right, you’re wrong” demeanor that alienated many potential allies.

Another former Obama staffer confided to me that it was clear to him that the president didn’t mind giving speeches (lectures), but really avoided personal contact with members of Congress and folks outside the Beltway.

When your allies are writing about you that way, you know there's a problem. This is why President Obama seems so out of touch with the public. While the Clinton administration was so poll driven and so focus-group tested it seemed incapable of bold leadership, the Obama administration simply ignores everyone and the president is totally confident he's the best at every single job around him. He's even said so in the past.

But this editing the past to inject yourself is more than just incredible narcissism and ego. Its a sign of the disrespect for the past and contempt for those who came before him that President Obama and his wife have demonstrated repeatedly. America was a horrible place before them. Nothing in the past is worthy of respect or dignity. Everything new is better, the past was wrong and benighted. President Obama is one of the greatest presidents of all time. Jut ask him.
Posted by Christopher R Taylor at 9:00 AM