"Fish know little of the water they swim in and the 21st Century Homo Americanus, fed racial mythology along with his mother's milk, often knows less." 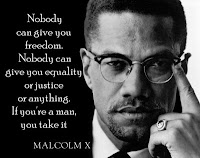 There's a line that blacks used in the past which became somewhat of a joke over time. "The man is keeping us down!" Its not that there was no validity to it, the problem is this line was repeated and used in such inappropriate situations that it lost all meaning and power. Its like conservatives crying "media bias," particularly when its not really bias at all. Its becoming a joke rather than a lament.

The man (institutional government and society) was keeping blacks down, by refusing them full access into society, compartmentalizing them off into "separate but equal" categories Booker T. Washington never intended, and using laws and pressure to make sure blacks could never achieve much.

That's changed these days, and institutional racism against blacks is all but gone (there are a few holdouts such as some police). That's good but the "man keeping us down" line goes on, as a reason why things are hard and success doesn't come. And in a sad, strange way... they're right. The man is keeping them down.

The problem is, the "man," the establishment culture, is different these days. Gone is the Bull Connor Jim Crow law era. There aren't separate drinking fountains any more. In its place is something even more sinister. Daniel Greenfield at Sultan Knish writes:

Imagine for a moment that you didn't really have to work, that you were surrounded by ads offering you free food, endless free training programs and benefits, special opportunities to get everything from jobs to government contracts, without having to work for them. Imagine that at any job you held a "Get Out of Work" card by filing an accusation of racism. What's more, imagine if you were surrounded by ads and people encouraging you to do just that? Imagine if you had been brought up in a dysfunctional community by a broken educational system and its even worse entertainment partners to believe that all of this was just because you were oppressed by white people? Then go ahead and break the habit.

This isn't typical life for black people in America, but it's the background that's always there. Most black people know someone that lives this way. They've known people who behave this way at work or who go from job to job, or never hold down any job at all. And while they may not admire them, the blame is assigned to a white society which made them that way.

The man is keeping Black Americans down, but its not external like it used to be. Today the man keeps blacks down from inside, through the welfare state, through continual assurance that you have no chance, that ambition and education is "white," that "keeping it real" means not working hard to get out of your life, and that every problem you have is due to some external oppression.

The man - the culturally dominant force of the left in academia, entertainment, politics, and popular culture - is keeping blacks down with these forces. There's good money and power for the modern Man in keeping them down, as Greenfield writes:

The new generations of immigrants have hacked their way up through street-level retail, often in black communities, to finance their children's education and progress up the ladder, as the only remaining access point to the American Dream. But that's a narrow ladder, and not one to which Irish, Jewish or Italian immigrants were limited. Immigrants adapt, the black community has not. Instead, its adaptations have all been maladjustments, destructive responses that leave them with fewer options than before.

Black leaders, individually, wield a great deal of power, but the black community has little power. Their "helplessness" is an excuse for the exercise of power on their behalf. That "helplessness" is what makes men like Obama or Sharpton or the neighborhood fixer and machine politician so powerful. He wields a collective tool of group votes, racial grievance and simmering violence-- but the practical benefit of this is limited. Black communities receive a sizable proportion of taxpayer money directed at services and entitlements which leave them more maladjusted than before.

Its almost a sinister combination of history, culture, law, and government working together to make sure blacks have as little desire and reason to achieve and move out of their situation as possible. And trying to point this out results in the inevitable croak of racism. Pointing out that the way out is to ignore those forces and work hard results in people crying "cultural genocide."

It isn't that the modern Man is trying to hurt blacks, its all done in the name of helping out and fighting racism. Its like a parent who doesn't punish children out of fear of hurting their feelings and generating neuroses, or a woman who won't call the cops on her abusive husband because he would be hauled off to jail. They mean well but are misguided and hurtful, making things worse for the ones they want to help.

In the name of helping people in poverty, they make it easy to never get out. In the name of diversity, they ruin ambition and achievement by reducing standards. In the name of fighting racism, they teach people to blame others for all their problems. And the results are all too similar to when racism and bigotry oppressed minorities as an international institution (let's not pretend only America had these laws).
Posted by Christopher R Taylor at 8:50 AM