“This chart — the truth — very clearly shows the truth undoubtedly.”
-Ed Schultz
Chances are, if you've been online recently, you've seen a chart that looks something like this: 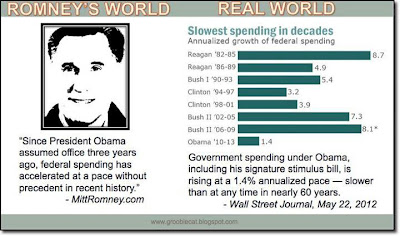 And it seems terribly impressive... and counter intuitive. How did the debt manage to more than double in the time President Obama has been in office if he's spending so much less than other presidents?

We know for a fact that President Obama has overseen more debt in his term than every other president combined before him so what is with this chart?

Well there are a couple of problems with it. First look closely at that chart, see the dates next to the president's name? Obama's charted spending starts in 2010. Why? Because the man who came up with this chart (Red Nutting) attributes all spending up to October of 2010 to President Bush. But President Obama was elected in 2008 and inaugurated in 2009, you say? Indeed he was.

Never mind that Obama was in office starting in January 2009, never mind the "Stimulus" package and other spending that took place that year and the next. He's deliberately avoiding all that to focus on the official budget.

And there's another problem. The TARP package passed in 2008 that President Bush pushed for and said he needed to violate free market principles to save the free market, remember that? As Ann Coulter points out:

By the end of 2008, it was clear the panic had passed, and Bush announced that he wouldn’t need to spend the second half of the TARP money.

But on Jan. 12, 2009, Obama asked Bush to release the remaining TARP funds for Obama to spend as soon as he took office. By Oct. 1, Obama had spent another $200 billion in TARP money. That, too, gets credited to Bush, according to the creative accounting of Rex Nutting.

Oh, but there's more. There was a $410,000,000,000 spending bill on President Bush's desk that he refused to sign before he left office, a last minute thing the Democrats in control of congress shoved at him the last minute. When President Obama took office, he signed it into law. But Nutting blames President Bush for that too.

The crazy thing is the 2010 budget, passed in 2009, was the last budget that President Obama ever signed. So if you're going to chart spending based entirely on budgets and budgets alone, then you have to conclude that President Obama for three years has spent absolutely zero dollars. Why, he's the most fiscally restrained president in the history of mankind! Take that Tea Partiers!

Its simply a lie, from start to finish. The chart is a flat out utter lie that people look at and are confused by because it clearly is not representing reality in any remotest sense. Even the New York Times didn't print this thing. If someone shoves it at you, kindly and politely point out the basic error of starting Obama's spending in 2010.
Posted by Christopher R Taylor at 8:22 AM

"We know for a fact that President Obama has overseen more spending in his term than every other president combined before him so what is with this chart?"

An OCD observaton: That should be "debt", not "spending".

Well they're both probably true, but I should change it, you're right. And it needs a link to help avoid people demanding proof.