You can't have any pudding if you don't eat your meat!
-Pink Floyd, "The Wall"
Want a change of pace from politics and the usual arguments and frankly depressing stuff so often on blogs (such as this one)? Try Never Seconds, a blog by a little girl in Scotland about her school lunch. That's what she writes about: lunch at school, her own and others who send her their pictures.

Each school day she has a picture of what her lunch looked like, grades it, tells about what it was like to eat, and some added thoughts like "I love sweetcorn because I know the plants grow taller than Dad and he's really tall." Its fun to read because of her perspective, but I do have one thought on the matter; she eats like a bird. I know she's a little girl but... how on earth is she supposed to grow up on this amount of food: 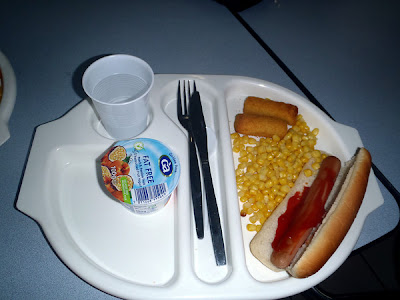 Maybe my perspective is off because I'm a 6'2 man but that's not enough food to make it worth sitting down a the table. And compare this: 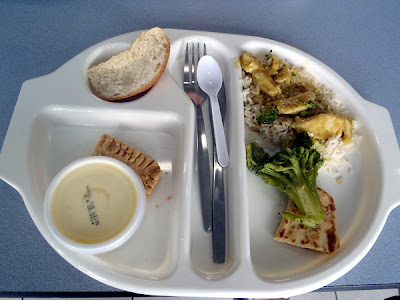 To this from an American school (a kosher Jewish school by the way) from a girl the same age: 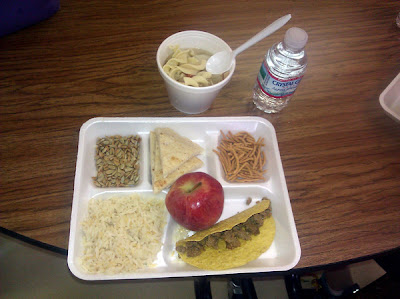 I know ha ha American kids are fat, but... they aren't particularly as I've written before and that looks like its a better amount of food, if a bit heavy on the grains.

Maybe it is enough, I don't know. The girl calls herself Veg and she has pretty interesting meals, such as the croquettes in the top meal and shepherd's pie. I like burgers and tacos and such but a little variety is always good, especially in food.

Incidentally something fun that she does is when someone sends her a picture from a location, she looks up the location and records how long it takes her to find it (like 49 seconds for Atlanta, remarking "America is big!"). The whole blog is sweet and fun and diverting, and its worth reading. I hope she keeps it up over time, but she'll probably discover boys and forget about it soon enough.
Posted by Christopher R Taylor at 7:38 AM