HERBIVORES IN THE PEN

"Getting married to pillows* and bed sheets doesn't help things either." 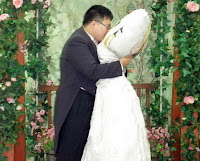 In the 1980s Japan was so rich, successful, and ascendant that writers such as William Gibson wrote about a future where Japan was the world's superpower and all but ran America through super corporations.

Japan since then crashed because its propped up economy was unsustainable, and although it has recovered well things did not turn out the way some expected. Back then Japan was working so hard that men were starting to drop dead in their thirties and the culture had to dial things back a bit. But in the background there was another phenomenon taking place.

In many western countries, the native population is starting to decline because folks are less inclined to have kids and have fewer when they do. Their population overall isn't falling because of immigration (primarily from Muslim nations), but the native folks of countries like England and Germany are fading away out of choice.

This is not due to any outside pressure such as China's "one child" policy they enforce by law and forced abortions, even killing children, but due to cultural movements. People don't want lots of kids these days because they are expensive, take a lot of time and attention, and require you to do something other than what makes you feel good, happy, and healthy. It doesn't actually take that many kids to stabilize a population - just under 3 on average per family - but people don't even want that.

And Japan has taken this to a level beyond these European nations. David Piper writes at Fox News:

Academics from the city of Sendai, which was hit hard by last year's tsunami, calculate there are now 16.6 million children under the age of 14 now in Japan.

And they say that number is shrinking at a disturbing rate of one every 100 seconds.

So if you do the mathematics, as they did, then the country will have no children within a millennium.

Japan's fertility rate is 1.39 per couple, not enough to replace the population which dies at 2 per couple. A recent study done by the Japanese Government found that almost 2/3rds of the Japanese public agrees that "children are unnecessary:

Additionally, 55.1% of respondents opposed the statement “The husband should work outside and protect the family,” an increase of 3% from the previous survey.

Since the modern Japanese culture is not agrarian, you no longer need kids to work the farm, carry on the family name, and with a government that takes care of you, you don't need them to care for you after you're too old to do so. So they're just unnecessary.

Part of the reason for this is expense - Japan is one of the more spendy places to live, especially in cities, so kids are difficult to afford. But the largest part is a cultural shift away from traditional family, dating, and childbearing. Young men in particular are tending more toward what Japanese call "herbivores" which I wrote about a few years ago.

He isn't gay, he's just emasculated, and the Japanese have what I think is an even better term for the wretch: herbivore. As in a cow, a hapless herd animal without any aggressive characteristics or leadership ability, a creature that can be very pretty but is pretty well useless except as a pet or a work animal.

Herbivorous men are the kind that fears or dislikes the outdoors, speaks in a quieter sort of feeble tone that seems to end with a questioning tone all too often.

These are even more wretched than the Metrosexual, who always has a girlfriend to check his ideas with and obey. This is someone so shy and hapless around women he fears them and avoids girls... and girls avoid him. Nearly every Manga and Anime that has a romance is about some pathetic figure like this, who for some reason has every improbably hot girl in the show throwing herself at him. Its easy to say that this is some wish fulfillment by the writers, but more likely its just a useful way to get cute girls involved in a way that never resolves the romance so you can drag it on for four hundred issues.

Except Japanese men seem to be taking this stuff seriously. And they're patterning their lives after these alleged heroes, who tend to look - and act - as feminine as their girl counterparts. When you ask a Japanese girl what a cute guy looks like, you'll tend to get a response that makes you wonder if they're actually lesbian. The same goes for a lot of Manga and Anime fans in America, they love guys they call "bidanshi" such as the Geisha Boy I wrote about a while back. So that look and behavior is reinforced by the girls that these guys like but fear.

Another aspect is economic. According to a recent study, a third of Japanese men "have no interest in sex." It isn't that the nation has become uniquely asexual, it is that they have no interest in the time, difficulty, expense, and stress of finding a girl to engage in it with. And that's gone up almost 20% since 2008. An Instapundit reader explains:

Unfortunately, three lost economic decades has resulted in a plethora of un- or under-employed young beta men, without real jobs or prospects of success, and young women who look at these prospective suitors and despair.

Young Japanese guys who can’t attract women turn to manga, gaming, and juvenalia young Japanese women, in a society without f**kworthy guys, turn to fashion, girl friends and the passive/aggressive “cute culture” prevalent among Japanese girls. It turns out that economic stagnation if the enemy of hot sex.

And Japan's economy is stagnant, like the US, resulting in plenty of economically unviable men. Like it or not, want a man who has money, and who can blame them? You cannot, despite the insistence of various songs and stories, live on love.

Japan's history probably has something to do with this effect as well. After being nuked at the end of WW2, Japan totally disarmed and repudiated the military in every way. To this day Japan lacks a standing army or Navy, and has only a light quasi military force for civil defense. Almost every story out of Japan has the military as the bad guys, and portrays them as nearly psychotic thugs. After a generation or two of that, you're going to tend to result in boys who think the use of force is wrong and strength is improper. Masculinity suffers, and thus childbearing and relationships suffer. Japanese girls are no different than any other girls, they want a man, not a gonad-less wretch who cowers before them no matter what they might say in public.

And when countries like Japan have a government-based retirement and medical program that must be funded by taxpaying young workers, disaster looms on the horizon of a childless society. By 2060 scientists estimate that almost 40% of the population will be over the age of 65. Most of those people will not be paying taxes or producing in the economy. When you add the rest of the population on public money, that adds up to total bankruptcy.

And Japan isn't alone in many of these factors. Poor economy, emasculization of men, focus on personal comfort and happiness over the future, rejection of masculinity as evil, continual portrayal of weak men and strong women in popular media, all of those things are true in America and Europe as well - and Europe shares Japan's horror of military, if not to such a strong degree.

Japan is a fairly small nation and it does not have a lot of room, so you could say that maybe having fewer people is not such a bad thing. But their culture is committing suicide, because unlike many European nations, they have very few immigrants in Japan, making the population just dwindle away and the future of their nation in serious question. Meanwhile, a recent BBC survey declared Japan the "best influence on the world."

And meanwhile, strongly masculine Muslim culture celebrates childbirth and having many children, and is rapidly outbreeding the indigenous populations of many European nations. This is how a civilization commits suicide. We don't need barbarians at the gate. Just herbivores in the pen.

*the guy who married his pillow is Korean, not Japanese. The Japanese guy married a video game character from the DS game Love Plus.
Posted by Christopher R Taylor at 10:05 AM