"There is one general rule about the history of the modern state of Germany since its inception in 1871: Anytime Germany has been both unified and isolated, armed conflict has inevitably followed."
-Victor Davis Hanson

Most hard left ideas in the world have come originally from Europe. Karl Marx was born and wrote his theories in Europe. The great socialist states of the 20th century were mostly European, and most of the principles of relativism, multiculturalism, and "progressivism" have their origins in Europe. So its no surprise that the European Union should arise.

Because the EU is nothing less than a grand scale experiment of socialist economic theory on an international scale. This is what they want for the whole world: a single economic system run by a hard left body of commissars starting from scratch to eliminate all those old concepts of personal freedom, ethical principles, and those icky ideas of national sovereignty.

The EU created a single currency - the Euro - which was grossly overvalued (and still is, to a lesser degree) and supposedly represented the collective economic might of the various members. Only one country refused to change over to the Euro, England, which is looking like a brilliant economic move on their part at this point.

The entire experiment was based on several leftist principles, primary among them being that the rich Northern European nations should give more to help prop up the poor southern ones, and as a result they'd prosper and everyone would do better. It was international redistribution designed to bring about economic equality. Germany has too much so they should give to Greece, Italy, Portugal, and so on. That way these nations would have a chance to get on their feet and they would do great as well!

The fact that these northern nations were prosperous due to a worldview that praises and embraces hard work, the virtue of earning your way, and a cultural rejection of living off others was irrelevant to the socialist ideas of the EU. They had more than others and it wasn't fair, and with them in charge, they could make everything all better.

Behind it all, of course, was an attempt to avoid the basic problem Margaret Thatcher pointed out with socialism: eventually you run out of other peoples' money. In many of these individual nations, there just wasn't enough of other peoples' money to keep going. The choice was between abandoning the reckless socialist policies that were bankrupting these nations... or finding a new source of revenue. And that source was nations like Germany and Norway.

And its been a failure, not just a bad one, but an incredibly ghastly one. And behind it all, someone has been playing games with finances and getting rich off it. Look at this chart and tell me what you see: 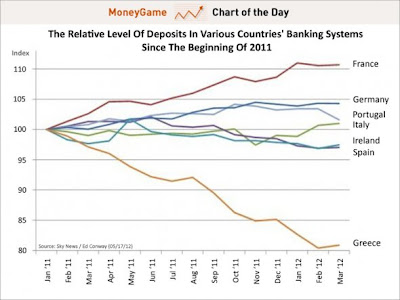 Yes, Greece has had a huge run on the banks, and reasonably so; I would yank my funds out too if I was living there. I'd buy gold and ammunition. But look at that other line the top plum-colored one. That's France's deposits. Now France's economy is pretty awful too, but they're dumping money into their banks like crazy. Why? Well a comment on Right Wing News sheds more light:

We are not sleeping. We are well aware that we are not saving Greece but their biggest private creditors, French banks like BNB and SocGen. Sarkozy has dragged us into this mess and with Hollande it will get even worse. We're acting like a donk at a poker table who can't stop as long he has losses.

We don't blame the Greek people. They have as little say as we have. We blame our own government for selling the Deutsche Mark for Esperanto Money. We blame our government to consider big banks (even the French) as 'system-relevant' instead of letting them reap the bitter harvest they have sown.

A total sell off of national interests is felt in Germany. A strong chancellor who's willingly gathering only weak personnel around her. Junior partner of France, in deed, and now also the scapegoat? Thank's for nothing.

France is making massive loans to Greece, propping them up. But where is the money coming from to put in banks? French banks, trying to corner the money market, are offering excessive interest on deposits in an attempt to get more money into their coffers. This is part of a French government plan to help shore up their banking system, but also to move the world economy more toward French domination.

The French have never, ever given up their national pride and certainty that they're superior to the rest of the world. While most on the left have a stark horror of patriotism (defined as evil nationalism and the source of wars and bigotry) the French frankly embrace it. They want to be a world power again. They'd like the Franc to be the standard world currency and see a weakness in the dollar, so they're taking a gamble on it falling and them being in place to take over.

But France understands that if they can become the strongest banking system in Europe and the default world currency, that will grant them prestige and riches to their country - and a greater world power, finally beginning to match their permanent seat in the UN Security Council.

And they're doing it at Germany's expense, the nation carrying most of the financial burden of the EU and the ones being blamed for Greece's problems by many. Those stingy, selfish Germans, how can they not help out the poor Greek people? Victor Davis Hanson writes:

Beneath the recent election of a socialist president in France and the rise of various extremists in southern Europe is a common theme. After four years of austerity, no poor European country still believes that it can — or should — sacrifice to pay back much of what it borrowed from a far wealthier Germany, which supposedly undermined the European Union by not spending and borrowing more.

Of course, the EU always claims it will survive. Of course, all 21st-century Europeans know that nationalism and military preparedness are the fossilized notions of more primitive peoples.

But let’s wait and see what happens when Europeans not only default on lots of German-backed loans, but also defiantly announce that they should not have been given them in the first place — and thus should not have to them back at all. Injury for Germany is one thing; insult on top of it might be quite another.

Austerity requires giving up even a little bit of those benefits and easy living that people of nations like France have gotten used to. They just aren't ready to give it up, and Germany has more money; why don't they just give up more so we don't have to? they seem to be asking.

Because the EU has been about that since the beginning: finding a way to make socialism work even as nations are crumbling because it simply is unsustainable, to borrow a word from the left. Enough of this, and the historically aberrant peace of the last 60 years or so in Europe will come to an end. And hopefully the US will be smart enough to not get involved, this time.
Posted by Christopher R Taylor at 10:30 AM