"'The Friends of Khufu Gang.' This doesn't sound like slavery, does it?" 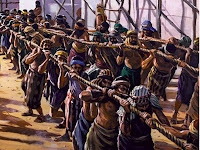 The pyramids are awesome to visit, by all accounts. Massive, carefully engineered structures built centuries before Rome became a country, they are carefully dialed in to point a specific direction and built with enormous blocks of stone before machinery was even invented.

Even though they look amazing today, they looked even more amazing in the past, when they were covered with polished limestone so they looked like a smooth surface that sparkled in the desert sun. The caps were covered with a layer of gold. They had extensive, brightly painted temple structures attached to the side and trees planted and watered, as well as what archaeologists believe were pools carefully maintained by priests. In all they would have been awesome to behold, visible for miles, and dominating the landscape even more spectacularly than they do now.

The very existence of such astounding structures has prompted wild speculation about aliens, and the general understanding is that hordes of miserable slaves built them under the lash. Movies typically portray this as miserable groaning slaves push multi-ton blocks of stone over wooden rollers, dropping dead in the blazing heat. Often they are presumed to be Jewish slaves.

Except that's not how they were made, according to recent discoveries.

The problem is that modern people tend to think that anyone before 1950 was a worthless idiot. That technology started with Steve Jobs, that innovation is a 20th century feature, and that anyone who lives in the past was bashing two rocks together for a living, grunting and living in a cave.

The truth is, technology has been with us for almost as long as humanity has been on earth. Archaeologists have uncovered evidence of steam-powered doors in Babylonian temples thousands of years before Christ was born. Greeks invented the calculator, central heating, the thermometer, tumbler locks and so on long ago.

Ancient cultures weren't primitive, they were just using different tech. I understand that having been inundated with evolutionary theory our entire lives its easy to presume we're somehow better and more advanced now, but all we really are is people with better toys and fewer disasters to set us back.
And when it comes to the pyramids, they weren't built on miserable slave labor, they were built with paid workers using innovative technology. And honestly a lot of it is kind of obvious. How did they get those huge blocks up on to the stack? Well looking at the shape of a pyramid makes it sort of easy to work out: 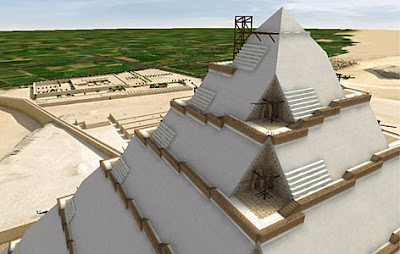 Its narrower as you go up, which makes ramps used to stack things up higher sort of an obvious answer. And they aren't built entirely of solid stacks of stone, they are built around a mound of rubble and dirt, lined with blocks of stone.

And moving those blocks is inconceivable, until you remember that as humans we're really good at labor saving devices and inventing things. So the 60 ton blocks that were carved out of the Aswan or Tura quarry were rolled on to barges, shipped to the build site, and moved off the ramp to the build site.

NOVA built a pyramid, using as much as possible the ancient Egyptian tools and technology (remember, they didn't have iron back then, they used bronze and other tools). What they discovered is astounding: a dozen men can move a sixty ton block over a slick surface. And that makes more sense. Those pictures of fifty guys moving a block? That's ridiculous, because not only is it not very cost effective, but how can you get them all around the thing in the first place?

The most you can pile around one of these stones is around a dozen, and overall the scientists estimate based on their building work rather than armchair theorizing, that it takes about 5000 men to build a pyramid, over a decade or so.

Archaeologists also have found that the pyramid builders had foot powered cranes, used levers, and were generally clever in how they built the things. They didn't manhandle everything using ropes and slaves, they used engineers who did this for a living. And since for centuries, Egypt was the richest place on earth, they could afford it.

The reason that scientists believe this is true is that they found graffiti at the build sites and in the pyramids. And the graffiti is not that of miserable slaves, but of hard working guys banded into groups. It appears that working groups would compete against each other, which helped progress significantly, I'm sure.

That's not to say it worked how we envision labor. One of the things Egypt had was a "labor tax" which required every able bodied lower class person to perform physical labor for the state a certain amount of time each year, so they'd be volunteered to work on various projects, such as the latest tomb or pyramid.

But working on this thing wouldn't have been such a horror. Keep in mind here that the great pyramid was the largest building on earth until the 20th century (the great wall being the largest structure). Nobody had pictures, so when you float down the river and reach the point you can see it, it would have been simply awesome. Here's how Mark Lehner describes this effect:

And you see, for the first time in your life, not a few hundred, but thousands, probably, of workers and people as well as industries of all kinds. You're rotated into this experience, and you serve in your respective crew, gang, phyles, and divisions, and then you're rotated out, and you go back because you have your own large household to whom you are assigned on a kind of an estate-organized society. You have your own village, maybe you even have your own land that you're responsible for. So you're rotated back, but you're not the same. You have seen the central principle of the first nation-state in our planet's history—the Pyramids, the centralization, this organization. They must have been powerful socializing forces. Anyway, we think that that was the experience of the raw recruits.

Think more Amish barn raising than slave plantation. Yes, most of the labor were poor people who died on average at age 35, but they were not slaves in the sense we understand. Jews didn't build the pyramids in any case, the timing is all wrong. Jews were enslaved in Egypt for 400 years ending about 1300 BC, and the pyramids were built around 2500 BC. They were primarily agricultural laborers, working with the animals (Egyptian culture thought working with animals was filthy and beneath them). However, because they were so prolifically breeding and successful, the Egyptian government became alarmed at their numbers and declared it legal for people to use them for any labor, so at the end of their time in Egypt, Jews did do some construction and base labor.

Egyptians built one of the greatest civilizations that has ever been on earth, ruled for longer than any other civilization, and were richer than any civilization before America. They had an amazing culture, massive construction and beauty, and were innovators in many areas, including writing and the use of paper. Sadly its all been lost and the pyramids have been corroded to the point of being mere skeletons of their former existence.

*This is part of the Common Knowledge series. Things we know that ain't so.
Posted by Christopher R Taylor at 8:17 AM

That is pretty awesome Christopher, thanks for this stuff, I enjoy the series a lot.

Well written and very interesting. That was my favorite Common Knowledge post yet. Good job!

Wonderful! This is fascinating. My grandson is interested in ancient Egypt. I am going to share this with him.