"I can't help feeling what we once called a 'bummed vibe' radiating towards us from behind the counter as her hands carefully move her purse from the counter into a drawer and lock it." 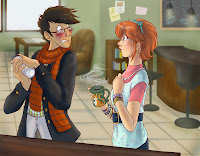 Over at American Digest, Gerard Vanderleun relates an odd tale of a day in Seattle, where oddity is easy to find. He talks about a head shop and a word you can't say, but what got me thinking was this bit:

The corner curry houses are doing a desultory business in over-spiced stews, and in the various coffee houses with free WiFi young couples who used to sit and have "intellectual" conversations over cappuccinos are sitting together staring at their laptop screens. Perhaps they're having "intellectual" instant messaging with each other.

I live in Salem, Oregon, also in the Northwest of the United States. Its an odd sort of landscape up here, and coffee features strongly. If you have seen the show Portlandia you get something of a glimpse, if a satirical one. Downtown within a block of each other there are three coffee shops and they all do good business (yes, one is a Starbuck's. They don't have the best coffee).

In these shops hipsters, college kids, intellectuals, artists, and an occasional walk-in customer sit drinking coffee. In the past, people would sit and chat over various topics, read newspapers and books, and generally enjoy a few hours with some high quality brew. Just walking into these places is intoxicating because of the smell of roasted beans, Cinnamon, vanilla, and other fragrances.

Today? They're all lit up by the pallid glow of a computer screen. If its not a laptop, its a tablet or a cell phone. Most people aren't talking much any more, they're browsing or texting or watching videos. Sure, some of them talk, but they're the minority and usually older.

And it makes a kind of sense. The sort of people who'd go to a coffee shop and sit around in public discussing Big Ideas© tend to be the kind who think they are terribly important and smart. The kind that think if only people would listen to them, things would all be so much better. The kind that think if they just had a chance, they could talk down any terrorist and solve any problem.

The talk wasn't really ever about a conversation, it was just an excuse to seem important and smart to others, to share the brilliant thoughts you had instead of listening to a boring lecture.

And that sort of person deep down doesn't think they really need anyone else or their ideas. They just use other people as a springboard and a source of approbation for their thoughts. Someone to be their Watson and say "gosh you're smart" every so often. So being wrapped up in their own little world reading ThinkProgress and watching you tube videos of Jon Stewart Segments and people harming themselves with the word FAIL on the screen makes a sort of sense.

But why at a coffee house? Well its a kind of sanctuary for hipsters and leftist intellectuals. It is a place they can go and not be offended by the presence of someone insufficiently left leaning or too square. You won't find ma and pa here, at least not for long. Only like-minded comforting people who will never threaten your worldview. And maybe that kind of cute girl behind the counter with 8 rings in her face and more makeup than Tammi Faye Baker (but in somber, dark colors) will notice and you can share your pain living in a world where Rush Limbaugh is yet unlynched.

Its a way of socializing and getting out among others - safe, like-minded others - without having to deal with them. And besides the room mate was driving them nuts by listening to Reggae music again.
Posted by Christopher R Taylor at 7:57 AM