"Klein also said Wright told him he 'made it comfortable' for Obama to accept Christianity without having to renounce his 'Islamic background.'" 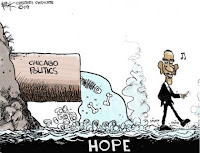 I talk about Chicago Machine Politics and mention the "Chicago way" on this blog occasionally but it doesn't hurt to explain what that means. It isn't unique to Chicago, but nowhere in America these days is it practiced so openly, blatantly, and regularly. This used to be how politics were more regularly done in the 30's, for example, but its largely gone away or been significantly reduced in scope and public awareness over the years.

To understand this you have to track several people and how they intertwine through the years. These are all good friends, people who don't just know each other but do favors for each other, praise each other, and support each other publicly. This isn't some vague connection of paperwork, but genuine close relationship.

When Michelle Obama retired from this position in 2008 after Barack Obama was elected president, Dr. James Madara, CEO of the Medical Center, announced that the Office of Community and External Affairs would be "reorganized" under... Dr. Eric Whitaker. Eric Whitaker goes on vacations with the Obamas, and is a close friend of Barack who plays golf and basketball with him. They met at Harvard and became good buddies who have stayed close ever since, and some whispered might get a federal appointment.

Dr Whitaker was in charge of the Illinois Health Facilities Planning Board under Governor Rod Blagojevich. During both Tony Rezko and Governor Blagojevich's trials, it was revealed that the board was used to solicit kickbacks and payoffs to the likes of... Tony Rezko. He got the job after being given a "glowing recommendation" by Senator Obama.

See how all this is tying together in a tidy nesting of interests and favors? Oh but we're not done yet.
When it was revealed what an anti-semetic, America-hating radical President Obama's "mentor" and "spiritual father" (his words) Reverend Wright was, there was some press attention which magically stopped when Obama said "well I missed those sermons and that's not the guy I know." Nobody looked too deeply to see if that was true. Reverend Wright sort of dropped off the radar, taking a sudden trip to Ghana.

Now, in the book The Amateur by Edward Klein, its revealed that Wright claims he was given money to hush up and go somewhere quiet. Klein has tapes of this conversation, which in part goes like this:

“After the media went ballistic on me, I received an e-mail offering me money not to preach at all until the November presidential election.”

“Who sent the e-mail?” I asked Wright.
“It was from one of Barack’s closest friends.”

“He offered you money?”

“Not directly,” Wright said. “He sent the offer to one of the members of the church, who sent it to me.”

“How much money did he offer you?”

“Did Obama himself ever make an effort to see you?”

“Yes,” Wright said. “Barack said he wanted to meet me in secret, in a secure place. And I said, ‘You’re used to coming to my home, you’ve been here countless times, so what’s wrong with coming to my home?’ So we met in the living room of the parsonage of Trinity United Church of Christ, at South Pleasant Avenue right off 95th Street, just Barack and me. I don’t know if he had a wire on him. His security was outside somewhere.

Why he'd care if the man had a wire on him I'm not sure, but that friend has been revealed by Klein as being... Dr Whitaker. What a good friend Dr Whitaker is, to give $150,000 to Reverend Wright like that!

Don't feel bad for Dr Whitaker though. The University Hospital recently was given a $5,900,000 grant from the Obama administration Health and Human Services department.

And that's how the Chicago way works, you form relationships and use those to benefit yourself and throw benefits to others who then reciprocate. Its all done using other people's money (primarily taxpayer money), so you're not out anything at all but you set up favors for yourself in the future. And that's the kind of President we have. He's been so steeped in it I doubt he even sees a problem; that's just how things are done, you help your friends.
Posted by Christopher R Taylor at 8:50 AM