"One of the serious problems with planning against American doctrine is that is that Americans do not read their manuals nor do they feel any obligations to follow their doctrine."
-Soviet document

After the internet mockery that the "Life of Julia" piece got, the Obama administration seems to have backed off of their "war on women" theme for now. Probably the poor polling (Romney has gained with women, supposedly) data doesn't encourage them either. I'm skeptical of all polls, and am convinced that the truth is, most voters were just waiting to see who came out of the GOP primaries and back them which is what's happening now, but we'll see.

The truth is, the "Life of Julia" bit ought to have been roundly mocked. Although it fits the "government is our big sugar daddy who helps us cradle to grave" mentality of the modern left, the entire episode was a basic violation of American heritage and cultural tradition.

Not long ago at the Ace of Spades HQ, Maetenloch linked a few pieces about American military capability and commented on why we're so good at fighting.


We're quite comfortable with a certain level of chaos.
Now that may not seem like much of an advantage until you realize just how poorly most other nations and cultures do handle it. Many places in the world are far better organized than we are - both government-wise and business-wise and even culturally. So in times of stability they will tend to do quite well since they're able to focus lots of national resources with far less inefficiency than the US does e.g. pretty much all the things which give Thomas Friedman a mental erection.

Which is great. Until times aren't so stable.

Then their organization and efficiency turns out to be quite brittle - when there's no official in charge and hence no 'official' way to keep the system running people will tend to just stop and wait for someone (else) to come handle it. You get paralysis instead of initiative.

He argues that the natural tendency of Americans toward independence and suspicion of authority works well when things go very wrong. You can see hints of this still when disaster strikes: we don't whine and beg for help (unless you live in New Orleans), we bear down and fix the problem ourselves, banding together regardless of previous difficulties. Stories of communities uniting in disaster abound in America.

And I think there's something to that perspective. Certainly in the past, the "can-do" attitude of Americans was world famous. That tendency to see problems as an opportunity to find solutions rather than sit and complain until someone saves us was a tremendous strength in settling the country and building a superpower. In the middle of the Great Depression, lacking computers, lasers, and modern technology, Americans built the Empire State Building, the Hoover Dam, and the Golden Gate bridge, among many other wonders. To this day, these structures have not just the power to awe, but serve a valid, important function.

I doubt we could do anything like that today. The replacement for the Twin Towers destroyed on September 11, 2001 are still in progress. It took a just over a year (410 days) to build the Empire State Building by hand. I'm not sure we could even get a new stretch of interstate highway built these days of environmentalists and lawsuits. Getting congress to agree on the spending would be enough of a challenge. But the biggest roadblock comes from us as a culture.


I question how much is left of that "can-do" attitude, after decades of indoctrination by the left through media and education. The reason there were soup lines, transient workers, and people on the streets selling apples during the great depression is that people didn't want or have government assistance. It isn't that they wouldn't have benefited from it, its that they saw a problem and looked for a solution, even if it meant traveling around the country in a boxcar to find seasonal work.

Today, after being raised generation after generation with the principle that we turn to the government to solve our problems rather than face them ourselves with our community, I don't know how much rugged individualism, personal responsibility, and suspicion of authority is left. I am sure it survives best in rural areas, but even those parts of the country have changed.

It is definitely in the best interest of those in power to promote this change. If your public rejects authority, doesn't need your help, and doesn't want to be told what to do, that severely limits the power you can exert from government or positions of authority - official or not. Commanding the mainstream establishment in a nation of this sort is of dubious benefit, especially if you are convinced you have the wisdom and power to bring about human utopia if only everyone did what you told them to.

So in a presidential election during what I believe is a cloaked economic depression, facing world terrorism that has not given up (and by some accounts is growing stronger), and in a setting where the entire world economic system is in such upheaval no one is certain what will come next, we get distractions. As Frank J recently put it:


But what issue is dominating the presidential race right now? Gay marriage.

Just a few weeks ago, the hot topic was some radio host calling a woman a “slut.”

I’ve noticed a few things about the problems we face. Each is a great threat to our way of life, every one must be handled right away, and every one is extremely boring.

I mean, most of these are the same problems we had back in the ’70s. No one solved them then, because they were distracted by the president being a bitten by a rabbit.
...
But, as soon as we try to sit down and focus on these imperative but dull issues, we hear that teenage Mitt Romney cut some guy’s hair, and we start spending all our time discussing that.

Maybe we’re no longer even capable of focusing on the real threats to our nation. After all, people used to have long attention spans for boring things like debt problems because all they had to distract themselves with were black-and-white movies with no CGI. Now that we have advanced technology and entertainment, we just can’t pay attention to the important things for long enough.

It isn't in the best interest of those in power for us to focus on what really is wrong, let alone what needs to be done. Nearly everyone except Paul Krugman believes that the government is too big and is spending too much. But nobody wants to talk about that or do anything about it. Even leftists will agree that we need cuts, and many even suggest a sort of austerity program where we at least freeze spending. Most will agree that cutting back spending to Clinton levels would be a wise choice.

Yet that simply isn't part of the national debate. Any time something like that starts to rise in the public, we get a distraction, focus on something else. Zimmerman vs Martin, an oil leak in the Gulf, and so on. Inflation, unemployment, overspending, debt, all those things are terrifically important, but we get a war on women and who marries who instead.

And this all plays off of the principle that Americans need to be focused on what government does rather than what they do. If Americans were largely disinterested in government power and antagonistic toward government interference, then the situation we find ourselves in now would never have arisen. An America that was full of united people who worked together to solve problems rather than gave money to a politician and demanded he do so would not have seen a bloated government, an insanely gargantuan national debt, and a politicians so in control of our lives.

Nobody wants to have some elected official telling us how to cut hair or what kind of showerhead to use, but as I wrote about yesterday, we get there by tiny incremental shifts, pushing us a little bit toward government subservience and away from liberty grain by grain of sand through the hourglass rather than in large chunks. And that can only happen in a nation which has incrementally been convinced that we really do need help from the outside and cannot really do it ourselves. 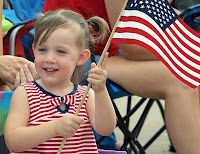 The principle of rugged individualism isn't about rejecting community, selfish narcissism, or callous disregard for others, its about handling problems ourselves rather than depending on big government to do it for us. It is about dealing with life on our own terms and rejecting authoritarian "assistance" that robs us of our liberty. And a return to that would not just enrage and weaken those who think they are our betters, but it would bring vitality and promise back to a superpower staggering under chains of federal power.

That would mean life would be tougher, and we'd have less time or ability to focus on our inner child and hedonistic tendencies. We'd have to find our own solutions rather than hold a hand out and demand others pay more. And we'd have to work to help those in need around us instead of demanding others do so. But we'd be a far better nation for it.
Posted by Christopher R Taylor at 10:45 AM