"I thought that every federal, state and county office already WAS his campaign headquarters in Oregon." 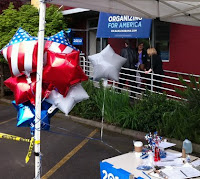 Oregon is a very reliably Democrat-voting state. It hasn't voted for a Republican president since Reagan in 1984, and Obama beat McCain by 17% of the popular vote. With only seven electors, Oregon is fairly ignored by politicians, who'll make a quick dip through the state as they head toward ones that actually matter to them.

Like many states, the bulk of Oregon's land mass votes more conservative, but the bulk of the state's population lives in big cities. So while 98% of the state votes one way in terms of area, that 2% contains more than half of the population, and it votes reliably another. In Oregon, that means Portland and Eugene (the first and third largest cities) control the state's political direction and the rest can be simply ignored. Usually.

Except despite being a reliable Democrat-voting stronghold, President Obama's reelection team has opened an office in Oregon. Jeff Mapes at the Oregonian writes:

"Isn't Oregon blue? Do we really have to have a campaign here?" Keating asked rhetorically, before answering, "Yes we do."

Keating noted that Democrat John Kitzhaber's 22,000-vote victory in the 2010 governor's race over Republican Chris Dudley was "a little too close for comfort." She said a key factor in his win was the strong Democratic get-out-the-vote effort.

The truth is for several Gubenatorial elections in a row, the Demorcrats won by a slim margin. And that makes them uncomfortable, because they're supposed to easily win by taking a portion of the red counties and the greatest bulk of the blue ones, adding up to a large margin of victory. Except they aren't.

And there's another factor: people just don't like President Obama very much. Yes, they like the man Barack Obama okay, but as president, not so much. Things are not getting better, most people have a sense that the economy is far worse than we're being told (and they're right). President Obama has been pretty awful at the job, and when they look at the two people running, Romney doesn't seem so scary for a Democrat to vote for.

And so President Obama thinks he needs to campaign even in deep blue Oregon. Note, however, the use of the term "grass roots" in the article, which shows that Mapes isn't very clear on what the term means:

This time, the Obama campaign is adopting a different grassroots campaigning model in Oregon. It is organizing neighborhood teams...

Er, that's not grass roots, that's top down. Grass roots springs up on its own from the people. In any case, President Obama isn't making the kind of money his team expected at this point and looks likely to fall far short of the "billion dollar campaign" they were talking about as late as earlier this year. So as the article notes, its not clear how many resources people are likely to get.

I'll say this: John Kerry's presidential election had a far greater community presence and local effort than Obama's did in 2008, in Oregon at least. They were really pounding the streets and knocking on doors. I think losing that one took a lot of wind out of the sails of enthusiasm for that kind of work.
Posted by Christopher R Taylor at 10:49 AM