ZOMBIES AND OTHER APOCALYPSES

This is the way the world ends Not with a bang but a whimper. ―T.S. Eliot 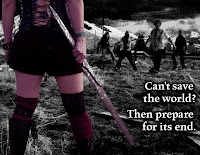 Zombies are one of the best selling book topics today, eclipsing books about dogs and Hitler. Gun and ammunition sales continue to set new records, being one of the only economic sectors which is doing well these days. Disaster preparedness and having a kit around the house when things go wrong are popular topics, and my Depression Era Survival Kit is one of the most popular series I've ever done (along with an older piece on the cheapest places to live around the world). You could even bundle into this past popularity of global warming alarmism, warning of an impending doom brought about by human pollution.

What's going on? Why this sudden surge in popularity of disaster and apocalypse?
Well to one degree there's always been this sort of thing around.  When it wasn't global warming, it was global cooling, and before that it was overpopulation and before that technology was going to doom us all and so on.  Down through history, fears of doom have always been with humans, which used to help religions prosper.  The first section of the Koran is all about how judgment is soon to come and all need to repent.

But recently its really spun up to a fever pitch.  If you ask most people if they like how things are going or if they see the future turning out well, few will say "yes," and at least in my experience, fewer than in the past.  People just have a bad feeling about how things are going and see no bright point to rally around or hope for.  I think that's part of why Obama's "hope" slogan worked so well, because people clung to it like a drowning man to a plank of wood in the ocean.  Whether they believed him or not, they wanted to believe there was some hope and maybe he could be it.  Well they know better now, even if they will vote for him again.

I think the gun sales and zombie popularity and all that are symptoms of a general feeling of disaster and failure, that people are in a situation where they just don't see anything turning around.  I know that feeling well.  The last time America got to this point was after the Vietnam war, recession, gas lines, and disaster at the presidency under Carter.  Remember, Jimmy Carter was elected just 2 years after we left Vietnam, and 1980 was just 12 years after the Tet Offensive - just about as long as we are from 9/11.  Sometimes its hard to place things in the past in context of time but it helps to make comparisons.
Jimmy Carter's presidency was a humiliating disaster, he just couldn't seem to get anything right, most things wrong, and the country was in horrible shape.  Back then, the press wasn't terrified of a Republican winning, because after Nixon, they figured the party was dead and irrelevant.  So they felt comfortable in criticizing President Carter, especially after that clown actor radical Reagan was nominated, who'd vote for him, anyway?
Then Ronald Reagan caught on.  His optimistic message of turning the country around, the greatness of America, patriotism, the historical ties to the past, the greatness we could be again, and specific, common sense statements of conservative policy brought to the individual man's perspective sold big, bigger than almost any election in history.  Carter didn't just lose, he was utterly demolished; he carried two states... barely.  And unlike Obama's message of hope and change, Reagan followed through in office, turned the economy and the nation's mood around, and won even bigger the next time out.

This time we have... Mitt Romney.  The whitest white bread candidate of all time, the most boring, careful, modulated, poll-tested, demographics-studied, focus group-approved presidential candidate in the history of mankind.  His every word and gesture are carefully practiced after a decade or more of study.  His every statement has been cautiously examined and memorized for maximum effect.  He's more like a terminator than a man, a politicking machine that just will never give up.

And while he might do a good enough job, there's nothing to get excited, or even like about the man.  He's better than the alternative, which isn't saying much, but he doesn't offer any hope.  Just a chance of delaying the inevitable.  He doesn't offer any real change, other than slowing down the fall off the cliff.

People see the United States falling apart.  The economy isn't just stumbling along like a drunken man down a darkened alley, its on life support.  With a gargantuan debt and unemployment far more horrible than the stats indicate - if for no other reason than duration and the immense loss of so many jobs that some fear will never come back - people see the shining city on the hill's lights winking out five at a time.  The status and strength of the US has been severely damaged over the last decade.

And pushing this along is an entertainment industry that not only scoffs at liberty and the principles of the founding fathers and America's past, but actively works to undermine them through their products.  America isn't shown as a beacon of liberty and opportunity in TV and movies any more, its shown as a brutal oppressor, a place of bigotry, loss, and oppression.  The military is shown as a tool of evil men, the president shown as a corrupt murdered in films, and overall the image is immensely tarnished. Even the idea of patriotism is considered awful, so much so its openly mocked.  Our president specifically refused to act patriotic during his campaign and won.

And people have tried all these solutions. They've tried environmentalism and socialism and capitalism and greed and communes and drugs and sex and religion and rejecting religion and peace and war and everything else and none of it is making everything wonderful any more. Nothing seems to fix all our problems like it promises. We've done it all and are jaded, bitter, burnt out, and feel empty.

So people joke about zombies and disasters but underneath it all there's a mood that things are bad and soon to get much worse.  And its tough for me to argue against that, even at the best of times. But the truth is the United States is no worse off than its been in the past, and much better off than its been in others (right before WW2, the late 60s, some of the late 1800s city situations were horrific). Turning this all around isn't a matter of the right leaders or more positive films, its a cultural thing. We as a people are the ones that drive our nation, like any other. And our attitude cannot be determined by who is president or what another nation thinks of the US.

The biggest problem the United States faces isn't leadership or entertainment, its our failure as a culture to produce, strive, achieve, and embrace the virtues of past generations that built us to the point we're at now. Past generations of Americans were famous worldwide for the "can do" attitude. When faced with a problem, Americans would dust off their hands and start working on a solution instead of moping or calling on someone else - government for instance - to help out. That was the defining characteristic of Americans as late as WW2. Today that's all but gone and if we can get that back through hard work, teaching our kids, rejection of the stupid hedonistic selfish culture we live in, and seeing challenges as opportunities, it all turns around overnight. If we can't? We'd be better off with zombies. At least you can shoot them.
Posted by Christopher R Taylor at 11:27 AM