WHO IS THIS 'WE' YOU SPEAK OF?

"I disagree with this insistence on sticking to specific words" 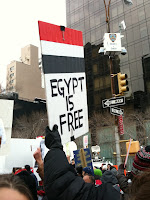 As radical Muslims begin to take control in the areas celebrated as "Arab Spring" such as Egypt, its finally starting to sink in to people where this is headed. Folks like me were cautiously optimistic, hoping that the people of nations like Libya and Egypt could find true liberty and justice, but doubtful it would happen.

Others, like Stanford professor Joe Brinkley in the San Francisco Chronicle, were filled with visions of revolution and democracy, ignoring our warnings:

Ever since Islamists took office in Tunisia, Libya and Egypt, they have been trying to convince us that they are advocates of moderation, democracy, women's rights and individual freedoms. And most people in the West, after jubilantly watching the Arab Spring's amazing revolutions last year, wanted to believe them.

But now we can see that these Islamic groups are taking us for fools.

The leftist dream of common man revolting against oppression and finding utopia through this is irrepressible, they just cannot help themselves. So they believed the lies told them by the Muslims, they ignored the warnings and horrible signs that things weren't going as they wanted to believe, and they published news stories that pretended these nations were finding freedom and hope.

“We” never believed them and “we” were not fooled. Only “you” and the cheerleaders at The NY Times like Roger Cohen believed them.

To this day, despite the clear evidence in these nations, many people on the left still cling to the myth of liberty in these nations. They are so dazzled by the ideal of revolution that they think that things will still work out. Although lately they sound a lot less confident.

The one anti-Muslim revolution that actually did start to take place in the middle east was in Iran, and President Obama was slow to respond, tried to back both sides, and reluctantly issued a weak statement of condemnation for the Iranian government. When a non-Muslim government was attacked, though, he sent in the Marines in Libya. Which makes you wonder about his priorities.
Posted by Christopher R Taylor at 8:43 AM