"Our people were taken back to a culture of dependence. Our unity was destroyed, as tribalism was entrenched. The virtues of hard work were displaced, as national coffers were opened wide for looters."
-Mwai Kinaki 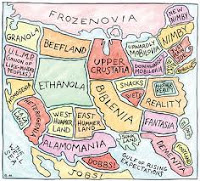 It seems to me that tribalism is the enemy of civilization. That as long as people split up into small groups that consider themselves superior and other groups their enemies, civilization cannot flourish. For a culture to advance and civilization to survive, people have to put aside their clustering and work together, even if some don't belong to their tribe.

Everywhere tribalism survives in our world, there civilization reaches a certain point and can advance no further because it is splintered into groups and blocked by animosity and warfare. Afghanistan, for example, can only be controlled through a horrific dictatorship as long as this tribalism continues. It rears its ugly head in places like the former Yugoslav republics, with groups carrying out hatreds centuries old against each other.

Its not hard to see why this would stop civilization, you cannot form a common culture and advance in peace and cooperation if your small group considers the others a foe, a rival, or evil. And that's where America is headed.

Some among us would prefer us all to group up into small tribes; blacks vs whites vs gays vs feminists vs handicapped vs immigrants, and so on. Instead of trying to build an America of E Pluribus Unum (out of many, one), they want everyone to stay distinct and separate. This makes groups easier to control by pitting them against each other, and it fits the worldview of certain ideologies fixated on relativism and "the narrative" but to the extent they succeed, civilization begins to collapse.

That's why color blindness and tolerance are such liberal concepts - not leftist, but lovers of liberty. True liberty cannot exist while groups are at war with each other. We cannot enjoy freedom while defending ourselves constantly. We cannot have a future as a nation without working together. But for some, it enhances their power and political future by splintering us up.

And that's something everyone, everywhere needs to fight.
Posted by Christopher R Taylor at 8:22 AM