"Even in wartime, few soldiers face those kinds of odds." 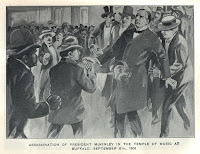 When President Bush was in Jacksonville, Oregon, he had a campaign stop in 2004. Protesters showed up and so did supporters, and the Secret Service told the protesters they had to move away. These folks were on the street in a public area, but they were ordered to move further down the street but allowed the Bush supporters to stay closer.

The protesters went to court claiming that they were discriminated against and that their first amendment rights were violated. This case has now made it to the 9th circuit court of appeals. I have a few thoughts on this.

First, they were clearly discriminated against. They were treated differently based on their characteristics (in this case being protesters). Yet as I have written about many times before, mere discrimination is neither illegal or immoral, its why and how you discriminate that's the problem

Second, since this is at the 9th circuit court, there's no question in anyone's mind how this will be ruled; the 9th is so hard left they're somewhere out in the Pacific Ocean waving red revolutionary flags. They will rule that this is a first amendment violation, but if the president were Clinton or Obama, they'd rule differently. I know that sounds snarky and bitter, but the history of this court is easy to trace. Its the most left-activist court in the land, deliberately so.

Third, while political speech is the most specific sort of speech the founding fathers had in mind for protecting in the first amendment, this isn't as cut and dried as it may seem. The Secret Service has a special job here, and to carry out that job they must reasonably be able to "profile" and take steps to protect the president.

Here's the thing to consider. We've had 44 different presidents. Four, or almost 10% of them have been murdered in office. Two were wounded in office. Four others have had close calls, shots fired at them, or otherwise attacked. That means around 25% have undergone direct attacks by would-be killers. There is no job in existence with that level of danger attached to it. The most deadly jobs on earth have a greater survival rate than 90% and none have a 25% casualty rate. You couldn't Get someone to take those kind of chances with their lives in any other line of work.

The Secret Service has the nearly impossible job of trying to protect a man who deliberately goes and talks to possibly hostile strangers almost daily, someone whose job is that dangerous to undertake. They have to take extraordinary measures, such as closing down an entire city block, interviewing everyone within miles of an appearance, taking over an entire hotel, and so on. Its the best they can do with an incredibly difficult profession.

Law enforcement officers such as the Secret Service functioning as protective details or crowd control are entitled to additional deference because protected speech can reasonably be used to assess threat level. That's why you can say "I'm gonna kill my boss" and usually nobody even notices, but if you say "I'm gonna kill the president" the Secret Service knocks at your door.

Freedom of speech always has limits - all freedoms have limits; not in the right, but in the free expression of that right. That's always been understood and is unquestioned by courts in America and elsewhere. You cannot slander someone freely despite your right to free speech.

The only complication in this case is leaving the pro-Bush protesters in place. Now, this distinction between friend and foe seems artificial or foolish for the Secret Service, because a would-be assassin can hide among the supporters just as easily as the protesters. But then, while it wouldn't be as simple, he could hide among the press, the staff of the hotel Bush is staying at, or even the Secret Service detail. Don't laugh, more leaders have been assassinated by their own security detail than any other single source. Just ask Huey Long.

And it is not unreasonable or improper for security to discriminate between likely threats and unlikely ones. At the very least, someone trying to shoot the president would be more likely to be hindered and attacked among supporters than among protesters.

On the other hand, few assassins have been motivated by what protesters usually are. Certainly Lincoln's assassin was, but most of the time they're either demented cranks like Reagan's shooter or have... other motivations, shall we say, such as the man who shot Kennedy. I'd use names but these scum don't deserve recognition.

And the question before the court is whether freedom of speech prohibits the security detail of the Secret Service from discriminating between friendly and unfriendly groups to this degree. The wisest course of action would have been to send both groups back a bit, but I wasn't there.

Certainly I'm repulsed by how protesters are treated at major political events like conventions and presidential appearances. Ever since the Clinton years "free speech zones" (a repulsive euphemism for "cages") consisting of chain link boxes to isolate protesters have been used. Not only is the whole damn country a free speech zone, but shuttling dissent off to a distant corner is unAmerican and cowardly. This act by the Secret Service feels somewhat like that kind of effort.

Personally I lean toward giving the SS the benefit of the doubt here. They had to make a judgment call based on the situation at hand, and I usually will support that kind of decision, particularly from such an apolitical and dedicated group of guys as the Secret Service have proven for over a century. However, I could live with the decision if it went against them in this situation... were the court a more balanced, honorable, and just group of wise jurors than the 9th circuit.
Posted by Christopher R Taylor at 11:21 AM