And the meek shall inherit the earth... 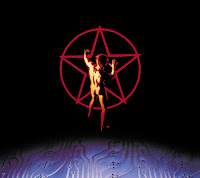 Rush is one of the most enduring rock bands of all time, starting up in the mid 70s and carrying on until this day putting out new material. Their live shows still pack stadiums and they are one of the most popular bands on album-oriented "classic rock" stations. Neil Peart does most of their song writing and all their drumming, and his songs are quite unusual for a hard rock power trio like Rush.

Instead of songs about chicks and cars and how mean parents are, Rush's songs tend to be more thoughtful and introspective, dealing with literature and difficult questions of life. They also tend to be quite left-leaning, which is why the 2112 Overture was so interesting to learn about.

According to the band, when they started work on 2112, Rush was almost fired. Caress of Steel didn't sell very well and the label wanted more "song" songs rather than concept pieces and long prog rock think pieces. So Rush who figured they were on the way out anyway, went all out for 2112, and did half an album as just what the label said they didn't want, and half with just songs to show the label they could do that, too.

For the concept piece, Neil Peart took ideas from a book he'd been reading recently called Anthem by Ayn Rand. This book is about a totalitarian country so oppressive that the word "I" has been demolished from the language and ideas of the people. There is no music, there is no individual friends, and no artists except those the state approves. There is no individuality, only the collective, and the quasi-religious state controls all.

Ayn Rand's call for individuality vs totalitarianism appealed to Peart, as did the rejection of organized religion (the song "Tom Sawyer" is basically his statement of belief, as is "Free Will" from the same album Moving Pictures). He loved the wiccan ideal of doing anything you wanted and being left alone, as long as you didn't hurt anyone else.

From this, Peart envisioned a world where music was controlled by a quasi-religious sect which controls all of life, and the discovery of a guitar by some individual who rushes to the temple of Syrinx to tell the priests about it, and is crushed by the all powerful state. Eventually he commits suicide (as I understand the song) and an invasion by a powerful force that breaks the power of the Solar Federation, formed to control the planets after a great war. The introduction to the songs in the liner notes reads:

I lie awake, staring out at the bleakness of Megadon. City and sky become one, merging into a single plane, a vast sea of unbroken grey. The Twin Moons, just two pale orbs as they trace their way across the steely sky. I used to think I had a pretty good life here, just plugging into my machine for the day, then watching Templevision or reading a Temple Paper in the evening.

My friend Jon always said it was nicer here than under the atmospheric domes of the Outer Planets. We have had peace since 2062, when the surviving planets were banded together under the Red Star of the Solar Federation. The less fortunate gave us a few new moons.

I believed what I was told. I thought it was a good life, I thought I was happy. Then I found something that changed it all.

The massive grey walls of the Temples rise from the heart of every Federation city. I have always been awed by them, to think that every single facet of every life is regulated and directed from within! Our books, our music, our work and play are all looked after by the benevolent wisdom of the priests...

The suite starts out with a rock reimagining of the 1812 overture, complete with cannons, and the hopeful thought from the teachings of Jesus Christ in the Sermon on the Mount: "the meek shall inherit the earth." Peace and love, man. It ends with the announcement of freedom from the people who left long ago and return with vastly superior technology, crushing the Solar Federation. Neal Peart thought of them as the cavalry, coming in to save the day. I am not so sure, it sounds more uncertain to me: is this new force any better?

Which is partly why this is such a great piece, you listen and it becomes the story you understand it to be. Peart's version is hopeful, mine is a bit more dark (a new tyrant has arrived), and in the end, its just all about the music and how it makes your life better. Sadly, the second side is not nearly as great, although it made the label a lot happier. It had catchy singles that got radio play, but then so did the "2112 Overture" and "Priests of Syrinx" songs from side 1, despite being long and unusual. And 2112 became one of the classic albums of all time, helping define progressive rock.

What's interesting to me is how a left leaning group like Rush can read Ayn Rand and walk away liking it and agreeing with at least parts of it enough to put a subscription on the liner notes of "with acknowledgment to the genius of Ayn Rand." They wrote "Trees" which could be taken as a rejection of hacking people down to make them equal, but the tone is objective and uncertain: its like a news report rather than a condemnation. Rush's lyrics are almost uniformly supportive of leftist ideas, except like many, they hold to positions that their politics actually would destroy.

Leftists tend to claim they are for liberty, individual freedom, leaving people alone to "do their thing" and so on. But their policies to achieve these goals actually give the government ever greater power, reduce liberty, and focus on a concept of equality so crushing that everyone ends up equally miserable and debased under the government's all-powerful thumb of statist control. In the search for individualism and freedom, they want to impose collective tyranny.

Which is exactly what Ayn Rand warned against. And Rush is a perfect example of how that plays out in their minds. In any case, 2112 is a work of art that deserves a listen.
And the meek shall inherit the earth...

We've taken care of everything
The words you hear, the songs you sing
The pictures that give pleasure to your eyes.
It's one for all and all for one
We work together, common sons
Never need to wonder how or why.

Look around at this world we've made
Equality our stock in trade
Come and join the Brotherhood of Man
Oh, what a nice, contented world
Let the banners be unfurled
Hold the Red Star proudly high in hand.

What can this strange device be?
When I touch it, it gives forth a sound
It's got wires that vibrate and give music
What can this thing be that I found?

See how it sings like a sad heart
And joyously screams out its pain
Sounds that build high like a mountain
Or notes that fall gently like rain.

I can't wait to share this new wonder
The people will all see its light
Let them all make their own music
The Priests praise my name on this night.

I know it's most unusual
To come before you so
But I've found an ancient miracle
I thought that you should know
Listen to my music
And hear what it can do
There's something here as strong as life
I know that it will reach you.

Yes, we know, it's nothing new
It's just a waste of time
We have no need for ancient ways
Our world is doing fine
Another toy will help destroy
The elder race of man
Forget about your silly whim
It doesn't fit the plan.

I can't believe you're saying
These things just can't be true
Our world could use this beauty
Just think what we might do.
Listen to my music
And hear what it can do
There's something here as strong as life
I know that it will reach you.

Don't annoy us further!
We have our work to do.
Just think about the average
What use have they for you?

Another toy will help destroy
The elder race of man
Forget about your silly whim
It doesn't fit the Plan!

I wandered home though the silent streets
And fell into a fitful sleep
Escape to realms beyond the night
Dream can't you show me the light?

I stand atop a spiral stair
An oracle confronts me there
He leads me on light years away
Through astral nights, galactic days
I see the works of gifted hands
That grace this strange and wondrous land
I see the hand of man arise
With hungry mind and open eyes

They left the planet long ago
The elder race still learn and grow
Their power grows with purpose strong
To claim the home where they belong
Home to tear the Temples down...
Home to change!

The sleep is still in my eyes
The dream is still in my head
I heave a sigh and sadly smile
And lie a while in bed
I wish that it might come to pass
Not fade like all my dreams...

Just think of what my life might be
In a world like I have seen!
I don't think I can carry on
Carry on this cold and empty life

This is part of the series.
Posted by Christopher R Taylor at 7:29 AM

I remember a bunch of us getting stoned, turning out the lights, and lying on the floor with our eyes closed while we listened to 2112.

We did this more than once, mind you.

As Bob Nelson once said, the mind is a terrible thing, and it must be stopped, before it kills somebody.

This and Boston were the two albums we ( me and my sisters and friends) listened to almost every day, in the years of the late 70s. And yes we were "mentally enhanced". I could write the lyrics out by heart right now. I still listen to both occasionally, and I miss the way it used to feel back then.