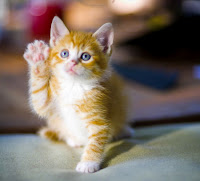 Why is it every time I see a cat I want to pet it?

Detroit is going to put up a Robocop statue in bronze. I really liked the first two movies (and fear the remake), but its like New Jersey trying to make "Born to Run" their state anthem. Both are pretty dismal views of their individual settings. Robocop was essentially a distopian criticism of what has happened to Detroit (although their targets were idiotic; they blamed corporations instead of nepotistic leftwing government and social pressures).

This isn't true about Jon Stewart:

He's only been one since around 2002. Before that he was pretty even-handed and fun to watch. Like so many on the left, he blew a gasket on President Bush and went downhill rapidly.

Its opening day tomorrow for Baseball. Catch a game, they'll be on all day long - go to one live if you can. Its American's pass time and a powerful link to our past. Don't know the game? That's OK sit next to an older fellow or someone with a scorecard, they'll be glad to explain anything you ask about.

I have a mild cold that's really stomping me down in terms of energy and motivation so its been a real task to get anything posted lately. Its kind of hard to explain; its like trying to lift weights when you feel sore all over. Yes, you can do it but its awful and takes twice as much energy as normal.

I apologize for the light content and will try to get up to speed soon as I can.
Posted by Christopher R Taylor at 9:26 AM

I think John Stewart does a good job interviewing people, I just don't care for his monolouges (and never have, really).

I find him to be funny and witty, and appreciate that he is more willing to attack his own side than most leftist pundits (although I shake my head in disbelief when I hear my liberal friends talk about how even handed he is). However, it does get old watching him try to straddle the fence between "I'm a substantial thinker!" and "I'm a funny clown with a big red nose!". In fact, he doesn't really straddle that fence so much as he hops from one side to the other depending on how much criticism he is catching...

I do wish there was a conservative version of him though... about the closest we have Greg Gutfield and I find him hard to take.

You are naturally attracted to free pussy?