A PROFOUND IGNORANCE OF THE SUBJECT 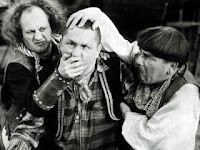 One of the sad consequences of having regularly celebrated holy days (holidays) in America is that the increasingly secular mainstream dominant culture feels the need to pontificate on religious matters a few times a year. This would be less of a problem were they more Biblically literate and conversant with basic Christian theology, but all too often, they are not.

From politicians quoting nonexistent verses to reporters covering Christians as if they are from another dimension, the time around Christmas and Easter is puzzling and sometimes shocking for Christians. Maureen Dowd recently wrote a column in which she tried to link Jesus to allowing women into the Augusta golf club (and compared Jesus as a messiah to Obama, only partly joking).

Via Meadia covered a study recently done by the University of Southern California which echoes some of the themes in my Bias series. What struck me about this study is that not only the few thousand polled by telephone but reporters themselves ranked religious reporting the poorest sort in American journalism. And given how poor journalism often is, and is perceived as, that's pretty awful.

The primary cause of this is a basic unfamiliarity with religion and spirituality, a topic that ranks very high and is a significant part of most peoples' lives (at least, non-reporters):

Further, the study found that among reporters, only a sixth thought religious reporting was significant, and of them, few are white evangelical protestants - the single greatest religious bloc in America.

Reporters are divided almost evenly between thinking religion a source of good and a source of evil in the world. This kind of attitude probably explains the fears of "dominionism" and theocracy, the freakouts over statements by Santorum or other openly religious people, and the confusion shown by journalists over religious topics. Particularly during the Bush administration, fearful columns and news stories were regularly written about how much influence religious figures had on the president and how very bad that is. President Clinton's religious advisers (regularly spoken to) and later President Obama's naturally were no cause for concern, naturally. As I wrote in my essay on incompetence looking like bias:

On the November 7 Meet the Press, host Tim Russert announced: “One Democrat said to me, ‘Are we on the verge of a theocracy, where if you don't agree with the president and evangelical Christians on abortion or on gays, there really is no room for you to practice what you believe in the United States?’”

General church attendance in the United States has dropped over the decades which makes me wonder what the numbers look like now, as compared to a 1980 study that found 86 percent of major journalists rarely or never attended religious meetings, and that 50 percent claimed no religion at all.

This kind of ignorance is typical among reporters, but not just about religion. Anyone who is an expert in any area notices a profound lack of comprehension in reporting about that topic. Sometimes it makes them reject a specific news source (they got it so wrong in this area!) without realizing reporters almost always get things wrong.

The problem is that journalists are trained in how to be journalists and hence lack a lot of real world experience outside the field and have almost no familiarity with any topic beyond how to write and publish news articles. Like a cow raised on a dairy farm set free in the wild, most of them would be helpless outside their media cocoon. That's not so much of a problem except they don't realize it.

Surrounded by like-thinking people and isolated from much of the workings of real life, journalists live in a sort of separate world, moving through the rest of live, but distinct from it and so filled with a sense of righteous purpose and often superiority they simply don't care to learn anything else. Its one thing to be ignorant, its another to be glad and arrogant about it.

Reporters aren't at fault for not knowing some things, we all suffer from that. They're at fault for not wanting to know, for deliberately avoiding huge swaths of the public, and for mocking the topics they do not understand. And when the topics they are ignorant of not only are areas deeply important to their customers, but ones they're expected to write intelligently about, then there's a serious problem.
Posted by Christopher R Taylor at 9:02 AM