"Somebody seems to have photoshopped 'Taxes' on that gas pump."
There are some prizes and awards which have in the past been noteworthy and respectable. Winning a Grammy used to be a significant event, showing great musical ability. Winning an Oscar was once a sign of a very fine movie. Winning a Nobel Prize was one of the highest honors one could attain. Getting a Pulitzer Prize showed incredible skill and talent in journalism. Or so we thought.

Over time, as the lid has been lifted, we've found some flaws in that system. Robert Duranty won a Pulitzer prize for his stories on how the Soviet Union was a wonderful place were people absolutely weren't starving and the agriculture was booming. It was all fiction, deliberate lies written by a useful idiot eager to promote the image of Communism despite its horrific problems. Al Gore, Yassr Arafat, and President Obama all won Nobel Peace Prizes, despite none of them doing the slightest thing in any remotest sense to earn a prize for peace. The Grammy was won by lip synching fakes Milli Vanilli in the late 80s and was a source of mockery for decades after. And so on.

I am not sure if these prizes always have been the joke they have become today or not, but the awarding of a Pulitzer to Matt Wuerker's political cartoons is truly abysmal. There's a slide show of his work at Politico and looking them over you cringe with how clueless and wrong they are. Political cartooning is often sophistry at its worst, but sometimes it is powerfully effective satire and criticism. This guy's work is poorly draw crap. Here are a few samples, all award winners: 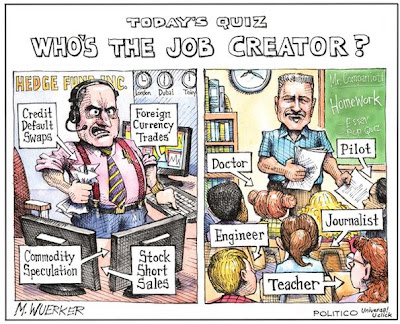 Yes, those evil businessmen never hire anyone or give them a job. But teachers, why they give people jobs every day... oh wait. 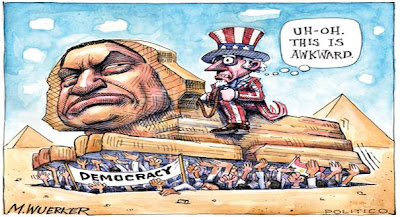 The idea of the US riding Mubarak is idiotic to begin with, he was riding the US, but given how things are turning out in Egypt, this looks even more clueless. 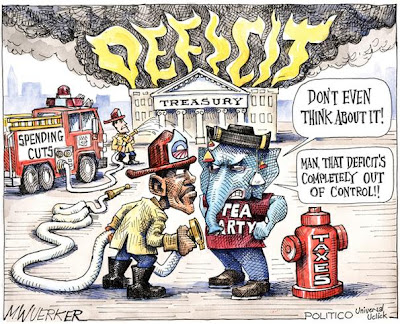 I must have missed those spending cuts. And poor Obama with his total majority control of congress couldn't pass any tax increases... wait. When I saw this one at Stoaty Weasel's place I just shook my head in sadness. If he wanted it to be more realistic, he could have put a shot glass with a straw in it to represent spending cuts, but even that would be a lie. 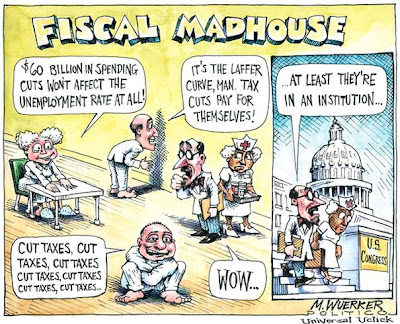 Yes, its madness to cut spending and understand that lower taxes stimulates economic growth resulting in higher tax revenues, given how every single time its been done in history that's exactly what has taken place.

But he hit all the right leftist buttons, so he got the prizes. And sadly that's too often how it works in business and much of life. If you push the right buttons to please the establishment, you get the candy.
Posted by Christopher R Taylor at 9:48 AM