OPPOSITE OF THE INTENTION

"They insist it is worthwhile because, ultimately, it will reduce the nation’s carbon footprint. " 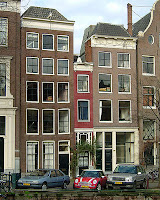 In England a king (I can't remember who) passed a tax which was based on the square footage of a house on the ground. The idea was to raise money for the latest war, and he wanted to nail richer people who tended to have larger homes. Home builders responded by building tall, skinny houses, some of them only one room wide and three or four stories tall. Their tax profile was low, but they still had the same volume.

This is what happens when you regulate or tax people, they change their behavior. Which is something the designers of a new tax in England don't seem to comprehend. If you want to upgrade your home to use less energy, add a conservatory on which will trap heat and give you a place for plants to grow, or do other upgrades to your home in England, you have to pay a new tax. The purpose of the tax? To force people to do "green" upgrades such as insulation. James Slack and Tamara Cohen explain:

Millions of householders who want to build a conservatory, replace a broken boiler or install new windows will be forced to spend hundreds of pounds more on ‘green’ projects.

They will not be permitted to carry out the home improvement or repair unless they agree to fork out for measures such as loft or wall insulation.

The work is expected to add ten per cent to the cost of any building project in the home.

Those who do not have the money will have to borrow it under the Coalition’s Green Deal – and pay it back for years through an extra charge on their energy bills.

This having been passed under the "conservative" Cameron government.

Naturally, this means more inspections and fees from inspectors and town councils, and money in the pocket of the government. Which will result in two likely reactions from home owners.
The first means that people won't be fixing their homes up to be more energy efficient or "green" because it has such a huge added cost. The second means that people will be driven to break the law, enriching criminals. Neither one is presumably what the designers of this legislation intend and are actually counterproductive to their plans.

Which is so often so typical of this sort of mindset. You really want to reduce waste and increase efficiency? Encourage people to do so, don't punish them for trying. Make it attractive to take steps you wish to see them take, rather than penalizing them for it. How hard is that to work out? This is the kind of good idea that is so stupid it could only have come from an intellectual.
Posted by Christopher R Taylor at 10:11 AM