"None of the officials blamed any particular group for the attack, fearing retribution from anyone named." 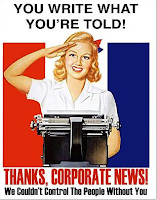 One of the most craven and deliberately political moves made by the legacy media in the last decade was in response to 9/11. Reuters, CNN, BBC, The New York Times, and many other major news outlets issued specific style changes to avoid using certain words, such as "terrorist" and "Muslim Extremist" to their workers, banning the terms.

The reason behind this was given as legal problems, wanting to remain objective and so on, but in all honesty the real reason was that they saw that President Bush was able to rally America behind actually doing something about terrorism, and were horrified by that. They blamed themselves for stirring up anti-Muslim animosity, and vowed to never help a Republican again.

Which brings us to a recent story from Afghanistan. Taliban terrorists, always hating the idea of girls learning anything, supposedly poisoned an entire school of girls in Takhar province. 150 girls were admitted to hospitals with various symptoms, the result of poison in the water supply, according to the Afghani government. Now here's where it gets really ugly, in the report by Mohammad Hamid in Reuters:

About 150 Afghan schoolgirls were poisoned on Tuesday after drinking contaminated water at a high school in the country's north, officials said, blaming it on conservative radicals opposed to female education.

Consider a specific phrase in that report: "Conservative Radicals." Conservative... radicals. That's like "tiny giants" or "sluggish speedsters." Why on earth use such an absurd term? Because the alternative and obvious choice is "Radical Muslims" but that cannot be allowed in Reuters. That might stir up anti-Islam sentiment, so we must avoid such an inflammatory term!

Why do people -- and not just strong partisans, but most anyone who isn't a diehard liberal partisan -- hate the media?

Because of this, this belief of the media that we wish or need their Instruction in ordering our lives and ordering our thoughts.

But they are determined to do just that.

Why is every terrorist story underplayed, at least after the media can no longer pin it on a Tea Partier? They are afraid of what their fellow childlike, incompetent readers will think, and what they will do. So they have to make sure you mentally-retarded ward-of-the-state adults don't do anything rash.

Ditto every story involving a black criminal. You can't possibly handle that information; you didn't go to the right colleges. Only if you are educated to the media's satisfaction can you be trusted with a story about black criminals.

The legacy media both overestimates its power to sway people and underestimates the intelligence and discernment of the public, I suspect. Not that the public has an enormous collective intellect and wisdom, but even that is underestimated.

Women in Afghanistan are understandably concerned about the push by President Obama to make nice with the Taliban, even so far as helping them set up an embassy in Qatar. These talks with the Taliban exclude the Afghani government and focus on how the Taliban can get back into power in the nation just so President Obama can withdraw troops from the country soon as possible.
Posted by Christopher R Taylor at 8:35 AM