"The problem with socialism is that eventually you run out of other peoples' money."
-Margaret Thatcher 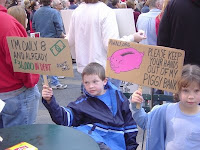 Building up massive debt in a country is usually portrayed as costing our children and grandchildren, mortgaging their future so we can keep spending now. Depending on who is in power, the other side usually starts squawking about debt and waste the loudest, and lately US debt gotten so almost inconceivably fast even people who generally shrug at debt or recognize to a certain degree its actually valuable are getting pretty upset.

But rarely does anyone actually state so openly and blatantly that they're charging children so that adults and old people can enjoy benefits today as Germany recently did. Bruno Waterfield at the Telegraph reports:

Angela Merkel's Christian Democrats have drafted proposals forcing all those over the age of 25 to pay a proportion of their income to cushion Germany against a looming population crisis.

The German Chancellor's ruling party is seeking extra sources of cash to pay for soaring pensions and bills for social care costs at a time when Germany's "baby boomer" generation is ageing amid a decline in the birth rate.

The proposals – to be adopted by Chancellor Merkel's party cabinet after the Easter break – have not yet set a figure on the age tax but officials are considering a special levy of about one per cent of income.

See the problem is that socialism can only be sustained as long as there is continuous economic growth and more people working than not working. So with the boomers retiring and aging, thus putting greater and greater burden on government welfare programs, this balance is tipping the wrong way. And the more socialist your country is, the worse that becomes.

For nations like Germany, whose population is actually shrinking and economic system is heavily socialist, that imbalance isn't just a problem, its catastrophic. There is not enough money for all those boomers to retire and start living off the state. And while that's been obvious for decades, nobody wanted to put the brakes on or change anything to address the problem until its nearly too late.

So Germany wants to Cut its spending and reduce socialism increase taxes - the favorite answer of the left, in order to pay for this increased burden. In America, that's what the Democrats want to do, too. They want to raise taxes on the richest people... to begin with, as Nancy Pelosi puts it... and pretend that will fix the problem.

Here's the flaw with that approach, as shown all over the internet but is worth repeating. After the fold is a chart depicting the amount of debt offset by the "Buffett Rule" which President Obama keeps pushing and the Democrats want passed:

If you look close, you can almost see the difference.
Posted by Christopher R Taylor at 10:56 AM

Ironic how the system we designed to ensure us a good future instead buries generations of our families in debt. Mainly one of the reasons why a lot of people think twice on going to college on a student loan.