The night is black without a moon
The air is thick, and still
The vigilantes gather on the lonely torchlit hill
-Rush, "Witch Hunt(fear, part III)"

There was a time in the United States, and elsewhere in the world, when whites were so dominant a culture and blacks so oppressed and ill-considered that when a black man was mistreated it was not any particular cause for concern, but woe to any black man who harmed a white. There was a time when the Democratic Party created the Ku Klux Klan (you did know that, right?) to protect its interests and suppress black votes and liberty across the nation.

Those days of evil and terror were marked by open statements of racist hate, by racial slurs used comfortably and without comment or reaction in public and even the press. It was a time when politicians presumed racial superiority of the white man, when blacks were hunted and even killed for taking actions the white majority disliked. Those days of evil, indeed.

Well they're back. The only thing that's changed is the colors.

Features distorted in the flickering light
The faces are twisted and grotesque
Silent and stern in the sweltering night
The mob moves like demons possessed
Quiet in conscience, calm in their right ---
Confident their ways are best
For over a year now, "flash mobs" (I hate that term) of black teens and young men have been attacking businesses and whites, shouting racial epithets and beating them mercilessly. Immigrants in particular have been targeted, but always whites. The most recent beating was of a tourist on St Patrick's Day in Baltimore Maryland:

The victim, wearing a Mountain Dew shirt, crumpled to the sidewalk and hit his head.

While on the ground, the man was set upon by about ten attackers, who stole his Tag Heuer watch, money, iPhone, and keys to his Audi, according to police. The dazed and defenseless victim is also punched, kicked, and even hit with a shoe by several assailants. In a final indignity, the man is “teabagged” by a male attacker.

The victim was white. The attackers were all black. A city commissioner of Baltimore ran to a microphone and declared this was obviously not a racial incident or motivated by hatred or bigotry:

Commissioner Frederick H. Bealefeld III urged Baltimore residents to "distinguish between criminality and racially motivated crime." Bealefeld, who is white, warned against "race-baiting" and "fear-mongering" in light of the Trayvon Martin shooting and other recent racially charged incidents.

The police are calling it an example of "drunken opportunistic criminality." Imagine if the ethic groups were reversed, how it would be portrayed in the media and by the police and commissioner.
The Trayvon Martin shooting has caused an explosion of racial hatred and bigotry by blacks against whites. The New Black Panther party issued a $10,000 bounty - listed as "dead or alive" - on George Zimmerman, the shooter. At , Laura wrote:

Now, how in the world could these fine gents feel so bold as to openly threaten someone, and publicly offer a contract for an illegal kidnapping? Why, it is almost as though they believe the law no longer applies to them. Almost like they have some precedent for believing that.

Hard to imagine how they'd get that impression after the Obama justice department brushed aside electoral intimidation charges against the New Black Panther Party a few years ago.

"Let me tell you, the things that's about to happen, to these honkeys, these crackers, these pigs, these pink people, these motherf***ing people. It has been long overdue. My prize right now this evening ... is gonna be the bounty, the arrest, dead or alive, for George Zimmerman. You feel me?"

George Zimmerman is clearly Hispanic, although NPR and other news outlets went out of their way to identify him as a white Hispanic or Latino. Why? Because his mother is white. Like President Obama, our first black president, according to the same news outlets. Is he a "white negro" to them?

The righteous rise
With burning eyes
Of hatred and ill-will
Madmen fed on fear and lies
To beat, and burn, and kill
But consider. What on earth gives anyone the idea that they can go on a public interview and spew repeated statements of racial hatred and bigotry? Imagine, just try to imagine someone spewing racial hate like that, using slurs against blacks and what would happen to them. The interviewer wouldn't be sympathetic and say "Michelle, really? You are so much better than that, honey." He would be justly outraged and this woman would be roundly condemned and used as proof of white hatred by every leftist on earth. But it gets worse. In the same interview she also said:

“I say to everyone that is on this call right now, I‘m coming out of the gate like a greyhound on a rabbit’s a**…my prize right now this evening is going to be the bounty — the arrest – dead or alive – of George Zimmerman,” Williams proclaimed during the call.

“To every brother, to every female, I am for violence if non-violence means we continue postponing a solution to the American black man’s problem just to avoid violence. You feel me? It’s time to wake up.”

She went on to explain that “it’s in me to fight“ and to ”raise up soldiers.”

She's not just venting here, she's deliberately fomenting violence, she's calling for violence against whites, and Zimmerman, who she thinks is white. Notice, her anger isn't against specific people its not against some folks who hurt her in the past or did evil things, its directed at every single white person who lives, based on the color of their skin.

Not to be outdone, the head of the NBP Malik Shabazz announced the formation of a new army of armed black men, an "army" of black men, warning that "if you touch us with what we are building and you have a hell of a price to pay" and "we got to build and in self defense, we got to kill."

Meanwhile, Al Sharpton and other black pundits stood up and called for escalation of protests and violence if George Zimmerman is not arrested. He was feted at the White House recently, with Attorney General Eric Holder saying:

Holder invoked the most powerful images of the civil rights era before discussing Martin. “‘Only when it is dark enough,’ Dr. King said, ‘can you see the stars,’” Holder told the crowd at Sharpton’s annual National Action Network Convention, per prepared remarks. “Today, once again, it is dark enough.”

Martin Luther King jr was using the night as a poetic method of talking about when times are difficult and dark. Eric Holder clearly couldn't be, since things are not dark and difficult for blacks in America. So what darkness is he referring to? This would be the same Sharpton who made a career out of fomenting violence, unrest, and riots without any shred of reason or evidence. Praised and celebrated at the White House, by President Obama and Attorney General Holder.

Quick to judge
Quick to anger
Slow to understand
Ignorance and prejudice
And fear Walk hand in hand
This is unacceptable by anyone. This is inexcusable behavior. This is rank racial hatred and bigotry, it is racism at its very worst and most open. This is as bad as the Klan and the white bigots of the past acted in public. This is the kind of thing that prevented the black man from finding justice and the Irish man from entering Boston businesses and clubs. This is the kind of hate and evil that brutalized the Chinese and American Indian in America's past. 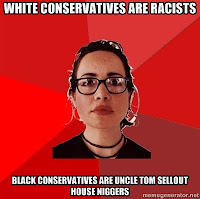 Apparently we're not beyond racism. Apparently President Obama isn't a post-racial president after all. Apparently his distancing himself from Sharpton and Jackson and the race hustlers in the 2008 presidential election was all a trick, a stance. Apparently as a nation, America is racist as it was in the past, when anti black racism was established at the highest levels of government. All t hat's changed is the targets, not the rhetoric, the evil, the hate, or the injustice.

And the people pushing for it and cheering it on are the ones who marched in Selma, fought for civil rights, and cry racism at every turn. What they should be doing is calling for calm, fighting racism in any form, condemning hatred, and working for unity and peace. But that doesn't serve their political ends.
Posted by Christopher R Taylor at 8:54 AM

OK. I'll keep that in mind if I ever write about that.