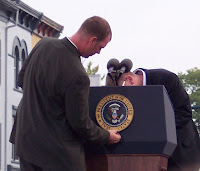 This is one of those news bits I was going to ignore because frankly neither story matters to me and the behavior of people pushing them seemed more like middle school kids yelling at each other than any serious debate. Most of it wasn't even funny, just juvenile. Perhaps I'm too old and grim these days.

But Jim Geraghty wrote something at the National Review Corner which makes sense of the whole deal and I thought that was worth passing on.

What I suspect is that this partially reflects the political professional class looking at the low-information voter and wondering what, if anything, will stick. Surely, even those who know almost nothing about politics and don’t care will at least pay attention to a story about a dog, right?
...
The respective base of each side is locked up. What remains is those folks in the middle who claim to care but who can’t be bothered to read about politics and policy. So what ends up influencing the decisions of these low-information voters?

And this is where you get into the nonsense of an election, the factors that don't mean a thing. Where you deal with people with little interest in or understanding of politics. People who are easily swayed by advertising and faux documentaries by people like Michael Moore. Its hard for me to have much respect for the intellect and discernment of folks like this, but I can't deny there are more than a few out there.

And this is what its about. The same people who make books about dogs one of the top two easily sold kinds in publishing and who mope over a pup lost when they were 8 are likely to lean against a guy because they think he was mean to a dog... or because he ate one at some point in his life.

So, its become a news story. And as Jim Treacher noted in the first "Obama ate a dog" story, this isn't really about the dog eating so much as a push back against the "Romney put a dog on top of his car" story. And politics have always been like this. Always petty, always like a debate between 7th graders, to some degree. Focusing on idiotic petty crap.

Because lets be honest, let's say that more than 25 years ago, Mitt Romney put a dog on top of his car and laughed an evil, maniacal laugh as he drove through the car wash and under low objects to terrify the mutt on purpose. Lets say President Obama to this day loves to eat dogs, and deliberately picks the cutest ones to lovingly grow up then personally kill and eat while cackling at the pained look in its eyes.

I'd have to question their sanity, but do either of these things mean they'd do a lousy job as president? Would either example mean their policy choices, platform, and the things they say they want to do were somehow wrong, now? If you know someone who this kind of juvenile crap is targeted at, the kind who barely knows the names of the candidates and votes on how their hair looks or whether they "seem presidential" in a picture, please do your best to inform them.
Posted by Christopher R Taylor at 9:17 AM