"There is danger from all men. The only maxim of a free government ought to be to trust no man living with power to endanger the public liberty."
-John Adams 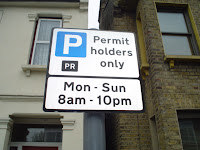 When my brother and I moved into this house in the late 1980s, you could park on the street for free. All you had to do was go down and register your car as a resident so the parking enforcement people knew you weren't using it to work at the nearby state buildings, and you'd get a sticker.

Today you have to pay to get a sticker, and you are given 3 passes to hand to guests, then have to buy more to let people park outside your house. You are in effect renting the parking places in front of your own house. Many of the houses nearby here are older ones and have no garage, some don't even have a driveway: you have to park out front.

The state, in response, desperate to raise more revenue (and totally unwilling to cut spending), put fees on things that were free before, charged more for things that had a cost, and in general ramped up costs for everything from the government.

This is kind of an object lesson in liberty. Essentially, the state is making people suffer for wanting to not pay so much in taxes. They're punishing everyone for daring to pass this ballot measure, and the greed of these politicians is so great they will charge you for something so basic that clearly ought to be free (parking by your house??) to retaliate for taking some of their candy away.

Your liberty, your ability to function free of state control and government interference in your life, is limited by what the governments do. To the extent they grasp some more of your life and your liberty, property, and earnings, they will only let go with a desperate and brutal fight. If you manage to get them to give up a little somewhere, they will find a way to take more somewhere else - and even raise the total amount in the process.

Taxes for reasonable, just, and proper function of government aren't just acceptable, but they are a duty for all citizens to pay. I and other fiscal conservatives have no problem with paying taxes, we just don't like paying a single penny more than the government absolutely needs to do its minimum job. And if they get away with one penny more, then they'll only give up that penny with a horrific fight, and try to get more pennies every single year.

Governments are described as rapacious beasts, ravening fires, and more by the founding fathers of the USA. And that's for good reason: they will always grow, expand, and take more of your liberty unless continuously and vigorously restrained by the governed. No one else will do it. Its the little stuff that is the heart and soul of tyranny, not the big stuff. Its the "this is too small to fight" stuff that brings about a collapse of freedom, not the grand gestures.

That's why they say the price of liberty is eternal vigilance. We have to watch our government, each other, and external forces who seek to take it away. Always, endlessly, or it will decay at the edges until it finally makes its way to the heart.
Posted by Christopher R Taylor at 10:49 AM

One of the enumerated benefits of living in a Progressive Society.

The real question to this subject is, "Why stay?"