"You must endure pain to be beautiful"

Americans are obsessed with looks and use their vast wealth to buy and even get surgery to fix themselves up, right?  Well yes, but as it turns out other nations are even more obsessed and even thought hey aren't as wealthy as America get even more work done.

At the Economist, they recently posted a chart showing relative amounts of plastic surgery done, per capita, in various nations.  The US comes in sixth: 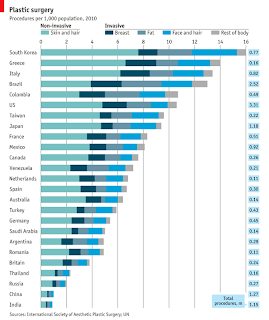 Number one is Korea, where an estimated one in five women have gone under the knife.  The bulk of this work is for hair extensions, facial modification, and liposuction.  And due to a boom in popularity of Korean bands and movies in China, they're getting a lot of Chinese customers these days as well.

According to government data, overall medical spending by foreign visitors hit a record $116 million last year. Fourteen percent sought plastic surgery or skin treatments such as botox.
Almost a half of all foreigners seeking a nose job, a facelift, a jawbone reduction or a tummy tuck were from China. Their number nearly tripled from 1,657 in 2009 to 4,400 in 2010.

South Korean plastic surgeons are perceived as the best in Asia, if not the world, and with all the practice they're getting that may be true. Most of the work seems to be done in making eyes "bigger," reducing cheek bones, and making chins less rounded. To me, it looks a lot like these women are trying to look like characters in a manga story, or at least less distinctly Korean. According to reports from Seoul, its not uncommon to see women with bandages on their face.

It used to be something kept more secret, but these days with the internet making "before and after" pictures so easy to find, actresses, singers, and other public figures are open about it. In response, women especially have begun thinking this is normal and desirable for themselves. According to that New York Times article, A 2010 government survey found that 31.5 percent of residents 15 or older were willing to undergo surgery to improve their looks. In 2007 the percentage was 21.5. And there are at least some doctors who pressure young women to get work done:

Recently, a local television station secretly filmed a hospital official trying to sell a double-jaw procedure to a woman. “You want to get married?” he asked. “Then you have to do this, you have to take the risk.”

At present, plastic surgery is not covered by the state health plan, but I would expect that it will be soon, given the popularity and money its bringing into the country. Its too bad these women think that they have to remove their natural looks to impress others and think they are pretty, because its almost all women and few men. Interestingly enough its the guys in Greece who get more plastic surgery done, apparently they feel... inadequate, shall we say.
Posted by Christopher R Taylor at 8:52 AM

What a shame, I’ve been to S. Korea and the women are naturally beautiful.

It has to do with too much vanity. Sometimes people want to improve a part of their physical appearance.

I'm pretty surprised with this statistics because I thought more ladies from the United States are getting surgeries from Long Island plastic surgery group. I think it only goes to show that they are insecure with their bodies and faces.

This is really surprising, I thought that most of them just look like that. Thank you very much for sharing this article.