I says "Pigpen, this here's the Rubber Duck
We just ain't a-gonna pay no toll" 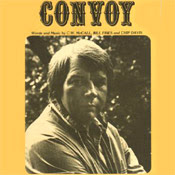 Sometimes its difficult to look back and understand why some things were popular or even liked. Disco, for instance, was so cheesy, crass, commercialized, and fake that it is difficult to comprehend why on earth it was such a massive popular phenomenon. Come to think of it I couldn't understand it at the time.

But others you can figure out, if you understand the setting and what happened around then. And by understanding those cultural events, it helps understand what happens today. Take the song "Convoy" by C.W. McCall. Its hard to listen to beause its just so cheesy. It was tough to listen to at the time for some reasons, mostly the horrible chorus of girls singing like some parody of a 70s song. Yet if you ignore that part (tough, I know) the song still has some charm and you can get a feel for why it was so fun and caught on so well.

For kids today, you have to understand something. Back in the 1970s, people didn't have cell phones, they were all tied to wires. You couldn't carry a phone into your car until the 1980s, and they were huge and incredibly expensive. And nobody had satellite navigation or GPS then because the system was just beginning to be developed and hadn't been put into space, that had to wait for the 80s as well.

But truckers had to know about road conditions, how to get places in town, traffic to avoid, and so on, and they used a Citzen's Band Radio. You can still get these, and truckers still actually use them, but more for social contact than absolute need. Most towns still have at least one person who stays on the CB and tells truckers the best route to get places, although I can't recall what channel that's reserved for.

And the CB radio, like most things, picked up its own jargon and language. Truckers were able to discuss freely any topic from how to avoid a weigh station to where cops were without most people understanding what they were talking about. This was useful for the truckers, but it also made it kind of cool, because it was a code you could use to talk to friends with and feel like part of a special group (like speaking in pig latin or "alfalfa" as a kid).

Also, at the time, movies such as Smoky and the Bandit had come out, and music by the Allman Brothers and Lynyrd Skynyrd was big. The general cultural trend was toward good old country boys who were basically good guys but broke the law. They were anti-heroes, smoking some weed and speeding, but not harmful to others, while the cops were fat idiotic bigots.

So rural anti-hero and masculine southerner type of guys were kind of popular at the time, in a curious "look at the strange people" way for many urban types. People dressed up like cowboys even though they'd never even seen a horse or steer in real life. And "Convoy" tapped into nearly all of that with a tale of a trucker rebellion involving CB jargon.

So when this song came out, it hit a bunch of cultural points just as CBs were starting to become popular and it exploded. It was a number 1 hit in 1975 on both country and pop charts and stayed that way for six weeks, and got as high as number 2 in the UK and number 1 in Australia. It was a cultural hit, and nearly everyone who was born in the 60s can sing at least part of the lyrics. Here's the song (the italicized parts are spoken over a CB radio):
Ah, breaker one-nine, this here's the rubber duck. You gotta copy on me, pig pen, c'mon? Ah, yeah, 10-4, pig pen, fer sure, fer sure. By golly, its clean clear to flag town, c'mon. Yeah, that Big 10-4 there, pig pen, yeah, we definitely got the front door, good buddy. mercy sakes alive, looks like we got us a convoy...

It was the dark of the moon on the sixth of June in a Kenworth pullin' logs
Cab-over Pete with a reefer on and a Jimmy haulin' hogs
We's headin' for bear on I-1-0 'bout a mile outta Shakeytown
I says "Pigpen, this here's Rubber Duck, and I'm about to put the hammer down"

Ah, breaker, pig pen, this here's the duck and, you wanna back off them hogs? Yeah, 10-4, bout five mile or so. ten, roger, them hogs is gettin in-tense up here.

By the time we got into Tulsa-town we had 85 trucks in all
But there's a roadblock up on the cloverleaf and them bears 's wall-to-wall
Yeah, them smokeys 's thick as bugs on a bumper; they even had a bear in the air
I says "Callin' all trucks, this here's the Duck we about to go a-huntin' bear"

Ah, you wanna give me a 10-9 on that, pig pen? negatory, pig pen; you're still too close. Yeah, them hogs is startin' to close up my sinuses, mercy sakes, you better back off another ten.

Well, we rolled up Interstate Forty-Four like a rocket-sled on rails
We tore up all of our swindle sheets and left 'em settin' on the scales
By the time we hit that Chi-town them bears was a-gettin smart
They brought up some reinforcements from the Illinois National Guard
There's armored cars and tanks and jeeps 'n' rigs of ev'ry size
Yeah, them chicken coops was full of bears and choppers filled the skies
Well, we shot the line, we went for broke
With a thousand screamin' trucks and eleven long-haired friends of Jesus in a chartreuse microbus

Ah, rubber duck to sodbuster, come over.
Yeah, 10-4, sodbuster? Listen, you wanna put that micro-bus right behind that suicide jockey? Yeah, hes haulin dynamite, and he needs all the help he can get.

Well, we laid a strip for the Jersey Shore Prepared to cross the line I could see the bridge was lined with bears But I didn't have a doggone dime I says "Pigpen, this here's the Rubber Duck" "We just ain't a-gonna pay no toll" So we crashed the gate doin' ninety-eight I says "let them truckers roll, ten-four"

Omaha?!? Well, they oughta know what to do with them hogs out there fer sure.
Convoy!

Well, mercy sakes, good buddy, we gonna back on outta here, so keep the bugs off your glass and the bears off your... tail.

Well catch you on the flip-flop. this here's the rubber duck on the side.

We gonna roll this truckin' convoy 'cross the USA
Convoyyyyy....

This thing is packed with jargon. Shakytown is San Francisco (although I-10 doesn't go through that city), bears are cops, swindle sheets are log sheets used to record driving hours to prove they get sufficient sleep and weigh in regularly) and so on. Here's a quick glossary of terms used in the song:
And all that trucker CB jargon became part of the popular culture a while. Some of them survive to this day, most people know what a bear is in this context, what 10-4 means, and what an 18-wheeler signifies. There are a lot of CB slang sites on the internet, such as CB Gazette. The jargon has expanded over the years, and still is in use.

Its interesting to me that this goofy song turned into a national phenomenon; these days it would be an "internet meme" with kids making pictures involving it on sites like 4Chan. The song has actually been covered a half dozen times by various people, including a rapper in 1981 with the latest by pop country singer Colt Ford in 2010. Sam Pekinpah even used the song as inspiration for a frankly awful movie by the same name.

Incidentally, C.W. McCall was a serious country singer with a few other hits; his real name is Bill Fries. He was elected mayor of his home town Ouray Colorado for two terms and is now in his 80s.

Here's the video; tell me it isn't still a catchy song despite the chorus:

*UPDATE: I had "Cab-over" defined incorrectly, and a commenter helped me fix it.
Posted by Christopher R Taylor at 9:42 AM

As for CB's, I have bad memories on those... my mother drove a Ford Bronco that had a CB in it. She was a good looking lady and we could not get on the interstate without her being harassed by truckdrivers saying inapropriate things over the CB. She had to have the CB as part of her dispatchng job for my grandfather's oilfield services company, so often she couldn't even turn it off when we were traveling. I got quite a whipping one time for flipping off my cousin, and my response was, "
But mom, you do it to those truck drivers all the time!"

Cab-over is cab over engine. These are the flat front trucks.

Thanks for the correction, I'll fix that!

And strangely, there is a website that is devoted to C.W. McCall.