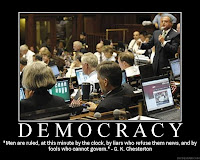 Congress keeps being busy, even though the legacy media tends to pay attention elsewhere.  Two particular events are worth attention because of how they may affect you.

The first is a move by the Democrats in congress to head off a Supreme Court decision.  As you probably know, the Obama administration publicly misrepresented the Arizona immigration bill as some kind of door smashing fascist cruelty where Mexicans are pulled off the streets and demands for "papers" are issued by bigoted haters.  They sued the state for trying to enforce federal law, and the case is moving through the Supreme Court (and its not going well for the White House).

Other states have also come up with immigration laws, and typically they are immediately sued by the Holder Justice Department immediately thereafter.  And the Democrats are not confident the Supreme Court will rule the way they want.  So they're working on a bill to bar states from passing any immigration laws.


Sen. Charles E. Schumer, New York Democrat, said his legislation would establish federal primacy in immigration by blocking states from taking any action. That would not only preclude state law enforcement efforts like the Arizona model now before the court, but also would overturn a Supreme Court ruling last year that upheld a different Arizona law requiring businesses to verify their workers’ legal status.
“I believe it is simply too damaging to our economy and too dangerous to our democracy to have 50 states doing 50 different things with regard to immigration policy,” said Mr. Schumer, chairman of the SenateJudiciary Committee’s immigration subcommittee, as he convened a hearing on Arizona’s crackdown law, known as S.B. 1070.

Unfortunately for Senator Schumer, the US Constitution actually protects the states and their right to create laws that impact them only. But when has the constitution or the ideas of the founding fathers ever stopped him before? I'd say that this bill, should it manage to pass, wouldn't survive Supreme Court examination, but I thought that about Campaign Finance Reform, too.

If you figure there's no way such a bill would pass anyway, consider this next story.

The US Senate passed a rule as part of the compromise with the GOP last year to get the debt ceiling raised.  Well that rule has been eliminated with a 62-37 vote.  John Hindraker writes at Powerline:


Last summer, Republicans in Congress agreed to increase the federal debt limit in exchange for the Democrats’ pledge to cap future spending at agreed-upon levels. The compromise was embodied in the Budget Control Act; discretionary spending was to increase by no more than $7 billion in the current fiscal year.

Why did they do this? Well the Post Office is run poorly, pays its union workers too well, and is hemorrhaging billions of dollars a year, so they need money. The Democrats tried to slip through a $34,000,000,000 hand out to the post office to keep it running and Senator Sessions (R-AL) challenged it, stopping the action, so they had a vote to override the Budget Control Act.

Hindraker doesn't know yet and I can't find anywhere which Republicans voted for this, because at least 3 had to, but you can guess that the usual suspects were involved (Olympia Snow, Susan Collins, Lindsey Graham, Scott Brown, Lisa Murkowski). When it comes to giving away more of your money - or even money that doesn't exist - you can always count on congress to find a way, and its not always Democrats.

This isn't making the news anywhere yet, probably because "your government wasting money" is a bad narrative for Democrats, but if some way to hurt Republicans can be found, it will show up, I'm sure.
Posted by Christopher R Taylor at 11:23 AM