"We are running on line north and south."
-Amelia Earhart's last transmission

Amelia Earhart, an early feminist hero, has become legend because of her flying into mystery in 1937. From an early age, Amelia was fascinated by planes and after taking a flight in one, decided that was going to be her life. Finally attempting to fly around the world, she flew off into the distance and was never seen again.

We're told she was the finest female pilot of her age, a brilliant aviatrix who could have handled any problem. She was a celebrity by the time she tried her first flight, having duplicated Lindbergh's transatlantic flight and other solo feats. Earhart wrote several books and set fifteen world records in flight, mostly involving "first female."

What happened to her? Some argue she was captured by the Japanese and died in a prison camp. Some argue she landed and gave up flying to become a housewife in New Jersey. Most thought she crash landed in the ocean near Howland island and died.

So what happened to this famed pilot, after all these years? Why is there such a mystery to this day?

Well, it turns out there probably isn't any mystery and her final resting place was discovered within weeks of her accident.

First off, Amelia Earhart wasn't the best pilot of her age. She wasn't a feminist either, she just loved flying. And contrary to literature and movies depicting the time period, the 20s and 30s were a period of feminine liberty and adventure, doing things guys did. It wasn't common then but then it isn't common now, either.

Earhart was a competent pilot but according to The Sound of Wings by Susan Lovell, one who took foolish risks and was criticized by more seasoned pilots. She eagerly sought out instruction from everyone she could, trying to perfect her skills.


Amelia Earhart's circumnavigation had some problems from the start. The first attempt ended in Hawaii with a collapsed landing gear which grounded the plane for repairs and ended that effort (possibly the added fuel tanks were more than the landing gear could sustain, although some at the scene criticized Earhart's landing).

The second attempt was going well, heading in the opposite direction from the first due to winds. Earhart was hopping from point to point to refuel on her trip, moving through South America, Africa, India, and to Southeast Asia where she refueled in Lae New Guinea. She took off from that airstrip toward Howland Island, over 2500 miles away for the next refueling. She never arrived.

Here some technical details are needed. The modified Lockheed Model 10E had a long antennae wire it could sling behind it for better radio transmission and reception. Earhart and her navigator Noonan quickly tired of hand cranking the thing in between uses, and clipped it off. The pair were using radio navigation, with a brand new Bendix direction-finding loop antennae which was supposed to help zero in on a signal. For the most part it worked, but Noonan noted that it was a tricky effort at best. Some say that the large antenna array slung under the belly of the plane broke off in takeoff from Lae, although it was never recovered.

Some say that the coast guard ship Itasca which was at Howland to help guide in the plane was using Naval time and Earhart was using Greenwich, which would have thrown off their calculations. The ship could hear the plane, but apparently the plane could not hear the ship.

Her last transmission indicated that the navigator believed they were on approach to Howland Island, but were not in position, according to the ship based on their radio signal. Some weak radio signals were heard which could have been Earhart in the subsequent hours, but were so weak and impossible to understand they were of no help to anyone.

Search and rescue efforts began an hour after the flight, looking over various islands and the sea, but nothing was reported found. Two years after her disappearance, a judge expedited the official presumed death so Earhart's estate could be settled and she was never seen again.

Here's where it gets grim. Lt. John O. Lambrecht was a U.S. Naval aviator participating in the search for Earhart's plane and reported seeing signs of habitation on a previously uninhabited (and to this day uninhabited) island on a small atoll called Nikumaroro. 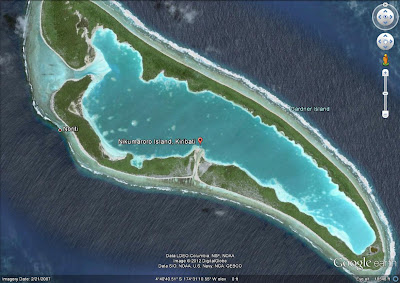 This island is now part of the Republic of Kiribati, and at the time was called Gardner Island. A report from the Colorado rescue attempts reads in part:


"Here signs of recent habitation were clearly visible but repeated circling and zooming failed to elicit any answering wave from possible inhabitants and it was finally taken for granted that none were there... At the western end of the island a tramp steamer (of about 4000 tons)... lay high and almost dry head onto the coral beach with her back broken in two places. The lagoon at Gardner looked sufficiently deep and certainly large enough so that a seaplane or even an airboat could have landed or takenoff [sic] in any direction with little if any difficulty. Given a chance, it is believed that Miss Earhart could have landed her aircraft in this lagoon and swum or waded ashore."

The island is flat and narrow in a sort of oval shape as you can see in the image at the top. That habitation appears to have been Earhart's final resting place. Discovery News reports:


"We know that in 1940 British Colonial Service officer Gerald Gallagher recovered a partial skeleton of a castaway on Nikumaroro. Unfortunately, those bones have now been lost," Gillespie said.

The archival record by Gallagher suggests that the bones were found in a remote area of the island, in a place that was unlikely to have been seen during an aerial search.

A woman's shoe, an empty bottle and a sextant box whose serial numbers are consistent with a type known to have been carried by Noonan were all found near the site where the bones were discovered.

"The reason why they found a partial skeleton is that many of the bones had been carried off by giant coconut crabs. There is a remote chance that some of the bones might still survive deep in crab burrows," Gillespie said.

Why wasn't anyone seen during a flyover? What happened to the plane? Well the plane could easily have been destroyed in the crash and broke apart in surf, or been ditched nearby in the ocean and lost in deep waters. The habitation might have been built using the last efforts of a wounded and dying survivor, too weak to be seen. But there's an even more unpleasant possibility, as author Karen Ramey Burns explains in the article:

A white figure waving a white shirt on white sands? Earhart might have seen the rescue plane, been frantically trying to get attention, and simply was overlooked, then died on that tiny island.

There was food, of sorts. There is little vegetation on the island, but fish and crabs are plentiful. TIGHAR, The Internation Group for Historic Aircraft Recovery is working on an expedition to the island to find more details and confirm this effort. The sad thing is, if its true, Earhart was discovered within weeks of her being lost, and overlooked. She either succumbed to wounds, or died of starvation, exposure, or even old age on that island, probably all alone and lost to the world.

Some characterize the attempt as being poorly planned and executed, brash, and by a pilot not really skilled and talented enough to attempt it. Whether that's accurate or just old boys saying "of course a girl couldn't do it" I really can't say, not being a pilot. What seems certain, though, is that Miss Earhart didn't vanish. She was just overlooked.

This is part of the Common Knowledge series: things we know that ain't so.
Posted by Christopher R Taylor at 10:28 AM

Earhart's case is still one of the most intriguing airplane accident incidents in history, I doubt that the mystery of her disappearance will ever be solved, especially now that no new evidence has been found yet.