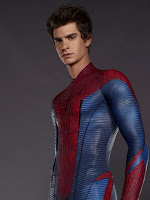 I used to get a magazine called Wizard which is all about comic books and the industry.  Back in the late 90s it was pretty good; informative, consistently hilarious, interesting to read, and full of bits you couldn't get anywhere else.  Then it started to get political with the election of President Bush and became intolerable.

I'm not sure Wizard is even being published any more.  But one of the features they did a lot of was trying to cast superhero movies.  They would take actors and actresses and try to match them up with parts, and usually did a pretty good job.  Back then it was fun to try to make a good superhero movie up in your head, because all you had were the awful old versions of Captain America, Spider-Man, and The Punisher.

Sure, Batman was pretty good but it rapidly went downhill as the studios were convinced they should be more like the 60s TV show than the comic book.  And the first Superman movie was actually quite good but the sequels got worse and worse at an astonishing rate.

It wasn't that they were incapable of doing Punisher and Cap well, it was that the studios thought this was trash property worthy only of a crappy effort, weak writing, low budgets, and minimal publicity.  The movies were terrible.

Well these days comic book movies are some of the only original properties being put out and often are quite good - sometimes incredibly good.  Movies like Batman Begins and 300 totally changed public perception of comic book films, and have moved the bar up a few dozen notches.  X-Men and the more recent Captain America have been great fun.

But when you look at casting choices, sometimes you wonder what on earth the studios were thinking.  I agree Keaton pulled off Batman better than you expected after seeing Mr Mom, but he still didn't work very well as the character.  His Bruce Wayne was tolerable, but he seemed more confused than suave.

Recently Duane Lester did his list of the 10 worst cast superheros in movies.  He runs down quite a few stinkers, some questionable ones, and then gives what he thinks are the best five.  Some of them I can dispute - I thought Nick Cage did fine as Johnny Blaze in Ghost Rider, it just was a poor movie.  And I liked the idea of Sylvester Stallone as Judge Dredd, he was just trapped in a horribly written film that violated one of the fundamental rules of the comic:

In Judge Dredd, John Wagner explains how this became a hard and fast rule for Judge Dredd comics:


It sums up the facelessness of justice − justice has no soul. So it isn’t necessary for readers to see Dredd’s face, and I don’t want you to.

That wasn't Stallone's doing, he was just the actor.  And if you're going to complain about that, complain that Spider-Man whips off that mask every five minutes in all the latest movies, including the new one, judging by the trailer.  Its tough to emote and act with a bag over your head - although if you've seen V for Vendetta then you know it can be done by a talented actor.  Hugo Weaving wears a head-to-toe costume through 99.9% of the film and that one glimpse is only of his hands.  Yet he does a wonderful job.

Some that he missed are Jessica Alba as Susan Storm, Michael Chiklis as Ben Grimm, Julian McMahon as Dr Doom, James Marsden as Cyclops (although part of that was the writing, they gave him absolutely nothing to do),  Val Kilmer as Batman, Kirsten Dunst as Mary Jane (part of that is her limited range, part of it was the writing, she was the one weak part of the two Spider-Man movies).  Malin Ackerman in Watchman was a disappointment too, she looked awkward in the costume and wasn't engaging at all - and she's such a central character.  And Mathew Goode was no good (so to speak) as Ozymandias, who is supposed to be massively charismatic and compelling and was really neither.

Seth Rogan was awful as Green Hornet in an awful movie that totally missed the boat with awful writing and acting all around.  Just terrible, and Green Hornet wasn't a very good property to begin with.  Michael Madsen was terrible in Sin City, the only flat note, the only guy who didn't seem to get what he was doing.

And while I really was entertained by Christopher Reeve in Superman and he played the role well, he's just too small.  Superman is huge, he's big as a house.  He's the kind of big humans can rarely hope to achieve.  The man is like 6'5, 300 pounds of rock solid muscle, but still agile.  So its tough to try to actually portray him in real life, but they keep picking these sleek, sculpted pretty boys and none of them look right.  And the jaw, he has to have a granite square jaw.

As for the good they missed, well there are quite a few.
I'm going to end with some controversy.  Hugh Jackman isn't that great as Wolverine.  He has moments, but he's not furious and animalistic enough, and he's too nice too often.  Wolverine is short and Jackman isn't.  But at the same time, Wolverine is really built, and Jackman is just in real good shape.  Think more Robert DeNiro from Cape Fear, but six inches shorter.  With nearly the same attitude.  Jackman is okay, but he doesn't really nail the part in either appearance or behavior.  He's too much a romantic type and not enough tightly held fury and grim old age trapped in a young body.
Posted by Christopher R Taylor at 9:36 AM

I actually think Chiklis was a pretty good choice for Ben Grimm, since he can be both lovable and just insanely bitter... and Julian McMahon did a way better Dr. Doom on Charmed than he did as Dr. Doom. Neither were miscast, based on the evidence had at casting... but both were horribly misused, and McMahon just didn't even TRY to deliver.