"For me, politeness is a sine qua non of civilization."
-Robert A. Heinlein
There are laws in nearly every country in the world that prevent children and teenagers from engaging in certain activities. It isn't that no child or teen would be responsible or thoughtful enough to do them, its that on average society has found that most are not. Driving, drinking, smoking, owning firearms, and so on are all limited - even certain entertainment.

The reasoning behind this is simple. Until you gain a certain level of maturity and wisdom, you simply cannot be trusted with some things. And for years now, that level of maturity seems to be pushing ever older; a century or more ago you could reasonably expect a 16 year old to be capable of handling themselves properly in public and trusted with responsibility. Now its questionable in a 30 year old.

But with the advent of the internet, all those restrictions and social barriers simply never formed. Kids of any age are given full, often unmonitored access to the internet and all manner of social media. So you get little jerks on message boards, kids sending naked pictures of themselves to each other, and sexting teens. And in social media, this mix of freedom and irresponsibility really is starting to meet in unfortunate ways.

Young people rarely have any capacity to understand long-term damage they might be doing to themselves and their reputations. They usually don't have the tools to assess the prudence of a task or think beyond immediate fun. So they'll cut loose with a tweet or a text or a facebook post or what have you without really thinking it through or realizing that the internet... is forever.

Case in point, the recent "Jewbags" scandal of the Democratic National Committee. Debbie Wasserman-Schultz put a bunch of her gal pals in charge of raising money from New York Money Men, as it were, and they celebrated by posting on Facebook: 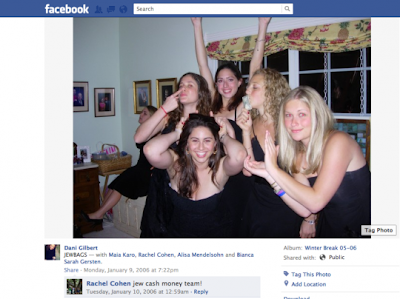 The Democratic Party’s newly appointed Jewish outreach liaison is pictured on Facebook in a series of provocative photos with her friends holding dollar bills and referring to themselves as “Jewbags” and the “Jew cash money team.”

Dani Gilbert, who has been a staffer in the office of Rep. Debbie Wasserman Schultz (D., Fla.), was recently appointed as the Democratic National Committee’s Jewish outreach liaison, according to her Twitter feed.

Now... look, Jews make fun of themselves regularly. Some of the best comedians on earth are and have been Jews goofing on themselves. And it wouldn't shock me at all to find out most if not all these girls are Jewish themselves.

But this is just... not right. One of the girls is bending her nose down (ooh, hooked nose). One is kissing a 100 bill (ooh greedy). They call their group "Jewbags" and "Jew cash money team." All in all its pretty crass and insulting at best, and thrown out into the public eye.

Now, whether or not this will have any impact on fundraising I can't say, but I suspect that if the left leaning Jews the Democratic Party relies on for money haven't figured out yet that the party is not their friend, I don't suppose anything will get through to them. And I don't know if this girl is the party slut she's portraying herself as on her page or not. I wouldn't be surprised, but I wouldn't consider it especially unique for her age group and profession.

I do suspect that this will hurt these girls in their job, and hurt the Democratic Party as a whole, to whatever degree it actually gets any sort of press coverage. This is the kind of thing the press tends to deem "not worth reporting" or "not really news" when it comes to Democrats. And its hardly unprecedented.

Tweeting stupid stuff that gets you fired or hurts your business is not new. Its happened over and over again in the public eye, where someone fires off a 140 character brainstorm and then regrets it later, or is punished for it. We've all seen the "I hate my boss" Facebook posts followed by a "I'm your boss and you're fired" comment. Social media allows essentially narcissistic people greater opportunity to feed their self love and in a culture without wisdom or many ethical boundaries, in a forum that seems to be painless and anonymous, people act like idiots.

I suppose there have been a few times when twitter has helped someone get a job or enhanced their life. I imagine its possible that someone might have gotten more business through their text messaging and Facebook posts. But I also am very certain that its done far more damage, lost far more jobs, and hurt businesses far more.

This combination of immaturity, feeling out of range and beyond consequence, and unfettered expression is not really helping people very much. There is no etiquette, there are no boundaries, and there is no sense of restraint in social media now, and I see no chance of that changing. Anyone who would try to impose any sort of social pressure would be not just ignored, but derided, hated, and attacked for daring.

In the name of "freedom" people simply want to be irresponsible, self destructive, and self obsessed. Spouting the first thing that comes to mind in any event isn't wise to do with close friends, let alone the whole world to read. Limits and boundaries aren't there to crush your individualism and destroy freedom, but to enhance it. A freight train isn't going to go anywhere without tracks. If we didn't have roads but just drove wherever, we'd have a harder time getting around, not easier. People need hedges and rules to function as a society, and we're trying to act like that not only is unnecessary, but cruel and tyrannical.

Liberty can only flourish if given modest, minimal boundaries beyond which it cannot extend or we destroy society and ultimately everyone's liberty but the most powerful and dominant. Civilization its self is a set of rules, agreed upon limits, and structures which allow the weakest to flourish along with the strongest. The social contract means we all give up a little to gain a lot.

And social media pretends you can get rid of all that without consequences. Well guess what: you cannot.
Posted by Christopher R Taylor at 3:47 PM

Interesting post about societal boundaries and netiquette. Social boundaries must be taught and reinforced through education. If the technology kids are using is more advanced than their teachers it's hard to teach children anything.