YOU MISSED SOMETHING ELSE

"Can we reverse course? What can we as individuals do? " 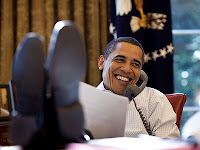 Recently Gerald Molen, Hollywood producer who has worked on films such as Hook, Jurassic Park, Minority Report, Rain Man, Schindler's List, and Twister wrote something for Big Hollywood. In that piece, he mentioned a few things that he and his fellow Obama voters missed in all the hype.

Oh, we bought into the cliched slogans of "hope and change." We liked his smile, his ability to read from a teleprompter, his super-friendly demeanor and his charismatic oratorical skills. Yeah, we jumped in with both feet thinking the country would show the world we had found our mojo and racism was gone forever.

When he and so many others bought into the carefully crafted myth, they missed a lot, such as
But he missed something else. He missed the warnings, the fact-filled, carefully researched concerns, and the criticism from people like me. We warned of his radical black supremacist church, we warned of his extremist allies and friends, we warned of his corruption in fundraising, we warned of the thuggish intimidation his allies carried out on his behalf. We pointed out his lack of experience, his fundamentally flawed understanding of America, and his dislike of the US Constitution. We showed how many times he flat out, openly lied staring right into the camera.

He also apparently missed the few times when President Obama was honest and straight forward in his campaign like when he said energy prices would "necessarily skyrocket under his plan, or how when you redistribute wealth its better for everybody.

And supporters of President Obama simply did not give a damn. They ignored all that shrugged at what they were told, scoffed at people who brought it up, and even attacked us for racism. They were hypnotized by a carefully crafted campaign supported by an embarrassingly sycophantic press and saw only hope and change and believed that they were the ones they'd been waiting for.

And now guys like me all know how Cassandra felt. Next time, voters, show a little more judgment.
Posted by Christopher R Taylor at 8:13 AM