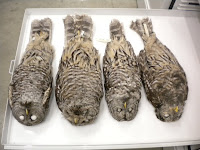 One of the Opinion Zone posts I did for The Washington Examiner was about a clever plan to save the Spotted Owl by killing Barred Owls. Its one of those "I got a snake to kill the mice, then had to get a mongoose to kill the snake then..." kind of stories that governments tend to get into. Well according to the San Francisco Chronicle, the Obama administration has given the go ahead to kill owls to save them. This probably seems logical and proper to a bureaucrat.

Its hard to know whether to trust Wikileaks' data, and certainly its a reprehensible organization, but their latest batch claims that Osama Bin Laden's body was not buried at sea with full Muslim honors, but was instead brought to the United States. Which means that not only is Wikileaks again trying to cause trouble and destruction, but if true means that the Obama administration lied through its teeth trying to create peace, failed, and has been found out.

For years, Barack Obama and hosts of leftists insisted that terrorist suspects were protected by the US Constitution, that we had to extend full civil protections to them, and that they must be tried in criminal courts. Obama's Attorney General Eric Holder is now claiming that's not true, that the Constitution does not cover terrorist suspects. I happen to agree, and I'm all for zapping terrorists where they stand rather than some trial process unless interrogation helps our fight against them. But this reversal is pretty stark.

Similarly, according to Obama Defense Secretary Leon Panetta, the president of the United States doesn't need congressional approval to engage in acts of war such as bombing Libya or enforcing a no-fly zone over Syria. That much I agree with, to a certain degree, but then he went on to say but he does have to get approval from international bodies such as the UN. Which is utterly devoid of reason, legal precedent, and historical example. So to sum up: getting congressional approval for war as the Constitution states - not needed. Getting UN approval without congressional - perfectly legal. So where, again, was the illegality of the invasion of Iraq in 2003, given that President Bush got both?

Anthony Garcia was tried for a murder, and while his lawyer tried his best, he was convicted, partly due to the fact that he had the story of his crime tattooed to his chest. Oh, but it gets better. While in prison for a previous crime, Garcia was collecting unemployment benefits. His two (!) girlfriends were cashing the checks for him, and he got more than $30,000 deposited in his personal inmate account to spend in prison.

Something you probably haven't seen on any legacy media outlet: Sandra Fluke the faux 23 year old, the activist who went to college specifically to start trouble over benefits, has a history. Among her past stunts is insisting that sex change surgery must be covered under insurance benefits. Not optional but mandatory coverage. Oh, but by all means, focus on what Rush Limbaugh called her.
While we're on the subject of Limbaugh, his home had a bomb threat and Media Matters is coordinating with Fluke to keep the hate alive and even incite violence against the man. Because he said this woman was a slut? No, that's just an excuse. Its all because he says things that they disagree with and want silenced.

Meanwhile, the computer back-up business Carbonite bailed on Rush even after the apology claiming they wanted to encourage civility (after praising icons of civility such as Randi Rhodes, Charles Osgood, Rachel Maddow, and Ed Schultz as "trusted spokespeople" for the company). As a result, Carbonite's stock has cratered and the company is looking somewhat shaky. If I were you I'd find another company to back up my goods, who knows how hard your backups will be to get if they collapse, and who might get their hands on the data.

There's a reason people like me want less spending from the government at all levels, and it isn't because we're mean spirited. Its because of stories like this, courtesy Darren A Nichols at the Detroit News:

Part of an $11 million grant intended to provide business attire to 400 low-income job-seekers instead helped only two people, an audit of the city's Department of Human Services has found.

The audit, conducted by the city's auditor general for the period from July 2009 to September 2011, found the department failed to control the operations and finances of a boutique that was to provide the clothes.

The department did not safeguard grant funds or create an inventory for the clothing, the audit found.

The bigger a bureaucracy gets and the more money they have on hand, the more wasteful, corrupt, and incompetent it becomes. Strangely enough, left totally on their own devices with huge sums of cash, these people bought incredibly expensive boutique outfits. Get this, the plan was meant to help 400 people - a sum of more than $27,000 per person even if things went as planned Even Michelle Obama can shop for clothes for less than that. Oh yeah the grant? "Stimulus" funds.

Wisconsin's recall fight continue. A judge signed a temporary restraining order to halt the state's new Voter ID law, because knowing who is voting is apparently bad, or illegal somehow. This judge, Dane County Circuit Judge David Flanagan, actually had signed a petition to recall Governor Walker. And, as it turns out, the guy is kind of sloppy at his job too, according to Patterico:

But, but, it’s not like the judge is just a partisan hack, right? I mean, his ruling is still quality legal scholarship, isn’t it? Replete with careful citations to the applicable laws and sound arguments?

But I'm sure he's a fine judge, otherwise. The left has to win this fight, or other states might take up the fight against public employee unions destroying their budgets.

Food stamps used to carry a pretty heavy onus of shame. If you were on them, you felt low and tried to keep it to yourself. Not so much any more; not only has the government gone out of its way to remove that stigma by using cards, but a lot of people just don't see living off others as a bad thing any more. Even when they don't need to, like Amanda Clayton of Michigan, who won the state lottery to the tune of $1,000,000 but insists that she has a "right" to food stamps. Oh wait I said something negative about a woman demanding government pay for her stuff, I must be a hateful man who wars against women!

According to a report in the Israeli newspaper Maariv, the Obama administration tried to bribe Israel into not attacking Iran until after the November elections with weapons and supplies:

Under the proposed deal, Israel would not attack Iran until 2013, after US elections in November this year. The newspaper cited unnamed Western diplomatic and intelligence sources.

Sort of an anti-October Surprise. Mind you I'm confident the Israelis are using this crisis to their advantage, too.

Just in case you were curious, here's a breakdown of debt and spending in congress by party control. You might notice a pattern if you look closely:

Doug Ross suggests this might cause leftist heads to explode, but I think its just useful to remind people that while Republicans are less than fiscally responsible... Democrats are completely out of their minds on debt spending.

Although its a pretty awful subject, Eugene Volokh posted some telling statistics on rape victims at his site. They're a breakdown of percentage of victims overall by age groups and looks like this:
Now, if rape is about control rather than sex, why is it the easier to control targets are less likely to be raped than younger, stronger, and typically more physically attractive ones? I sense another Common Knowledge post in the making.

Courtesy Carin's Is This Blog On? We get another kind of rape: taxpayer rape. Democrats in the state of Michigan have a cunning plan to get kids into college. They'll just hand graduates cash!

Michigan Democrats have introduced a plan to pick up the tab for tuition at state universities — up to $9,500 a year — for every student who has attended Michigan schools for his entire K–12 career. The plan is expected to cost $1.7 billion per year, or $442 for every household in the state.

Now, given that the state is $1.5 billion in debt, that's a curious direction to go, but the Democrats claim they'll pay for it by cutting out tax loopholes (code for tax increases), ending tax breaks, and collecting sales taxes from out-of-state retailers (tax the internet). Cutting spending or eliminating waste, duplication, and corruption isn't mentioned. But does every kid really need to go to college, and is every kid able to? Not in any way. But this might buy votes!

Not many people know who MSNBC talking head Ed Schultz is, because he's a minor figure on a nearly unwatched network. But over the past year, he's been given almost $200,000 by various trade unions. Coincidentally, he's enthusiastically pro-union, viciously attacking anyone they target or who questions any union activities. In the music business, this would be called "payola." Why is it not at least ethically questionable in the news business?

Gloria Allred can't stand to be ignored, so she's decided to sue Rush Limbaugh. Why? Because there's an old, obscure and unenforced law in Palm Springs Florida which criminalizes slandering a woman's moral character and "want of chastity." This seems like a very poor choice on her part, because any court case would necessarily drag all of Ms Fluke's sexual activities and lack of chastity into the open, likely proving at least part of Limbaugh's satirical commentary.