WE'RE NOT IN THE MONEY 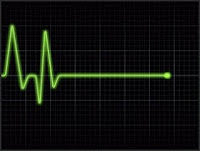 I've touched on this before, but it bears repeating. The economy is said to have technically ended recession back in June of 2009, according to the usual and technical definition of recession and recovery. That is, there were two quarters of growth in the official economic numbers.

The problem is the growth was weak and got weaker (it was barely over 1% last quarter), and most people just aren't seeing any recovery. Unemployment numbers are awful - and underemployment even worse - but that doesn't tell the whole story.

For example, most people aren't seeing recovery, or growth, in their lives. The Monthly Real Disposable Income Number per capita has been flat, showing no growth for two years, and was down in January by -.1%. Another key indicator, Real Personal Consumption Data through Nov-Jan has shown 0% growth. In other words, people have no increase in money and are overall spending no more. They're cutting back where they can because inflation is increasing in
key areas such as food.

On the other hand some areas are better. The price for several energy sources such as electricity has gone down slightly. The last reporting period actually showed growth in North American Auto Sales; up 16% and the highest in 4 years. Jobs in the public sector have actually gone up significantly, and in places like Washington DC, the economy is roaring along quite well. Some businesses are experimenting with more hiring, creating some new jobs. On the other hand, housing is still cratering. But the commercial real estate market is showing improvement, and some manufacturing is doing better.

In other words, the data is inconsistent, its good and bad. There are really bad areas and some hopeful ones. And the more keyed into the government and the highest level of industry and riches, the better off you are. For 99% of Americans, according to a report at the American Enterprise Institute, there's been no recovery.

And for that 1%? Well if you're already wealthy, the incredibly low interest rates and floods of Quantitative Easing cash has made loans and investments incredibly cheap and lucrative. It costs you almost nothing to get a huge loan to buy stocks or commodities with, then you sell at a profit. But the only people who can do this kind of thing are people who are already rich.
Here's just one specific example:

If you're already rich, this economy is making you richer. If not, you may not be seeing any gains at all, and if you can't find work, you're not seeing any income. For years.

In other words, while some might find this economy quite nice, they're people who weren't in any trouble to begin with. And the others are the ones working for government, which at the federal level always does well in economic down times. And I suspect that since politicians tend to hang out with and hob nob with the very wealthy and government types all the time, they haven't any real clue about how its going down here on the streets. They're save in their ivory towers eating $500 fund raiser plates and going to the Hamptons or Paris on vacation 18 times a year.

For the bulk of America, the 99%, as the mangy wanna-be hippies at the Occupy events put it, there's been no recovery. At best its been flat, a stagnant economy with no real growth and no real collapse for almost four straight years. The US economy is bouncing along what many fear is the bottom of the toilet, circling the drain. In other words, the old patterns and systems of describing the economy in terms of recovery and recession simply do not apply.

Why is this happening? Well economics are much more complex than most people portray them. This isn't simple mathematics because lots and lots of people are involved and each has his own motivation and her own fears. You can't boil it down to one specific, easily understood concept. Certainly the massive US debt and poor policy of the Democrats in Washington DC has contributed, like FDR's Keynesian idiocy did to extend the 20th century depression. And certainly there are other pressures, such as the shift in market.

These days, its not enough to be good at your job and have experience. In the past, the longer you were at work, the greater an asset you were. But with the way rapid changes in technology and the world's greater level of interaction that's not good enough any more. More important than experience, reliability, and seniority is flexibility and an ability to adapt to the changes and make the best of them. And that's not really even a skill you can teach anyone.

And there are definitely cultural pressures involved. When you raise generation after generation with an increasing perception of self worth and insulation from hardship, effort, and consequences, you get... the Occupy Movement, the ultimate expression of the "participation trophy" culture. These aren't good workers, they're barely workers at all. They want it all without having to actually do anything to get it. They don't want to do any risk-taking, in fact, they don't want any risks at all. They don't want to work hard, they don't really want to work at all. They just want what they've had all their lives: a pat on the head and rewards for showing up and being themselves.

But the truth is, I don't think anyone really understands what's going on, what will happen next, or honestly how to turn things around. We may have reached the end of the practical limits of an economy based on borrowing and credit. We might have shown just how rich and how far you can get, and got to the limits. Nobody really knows, yet.

All I know is, whatever the answer, its not what the Obama administration keeps trying to do.
Posted by Christopher R Taylor at 7:44 AM