"Being pursued by a woman is something that sounds good, in theory, but when it actually happened, I found that I really wasn't into it. It just felt weird." 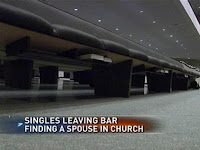 At the dating and relationship website YourTango, Christy Krumm tackled a religious topic and did surprisingly well at it. The topic was why so often churchgoing men won't date women within their own congregation, instead going to other churches or work to find love.

This is typically the case from what I've seen over decades of going to church. And what's more the guy usually ends up going to the girl's church, too. Its just easier than fighting every week. Christy Krumm's answers as to why this happens struck me as amazingly accurate and insightful:
Now, note, this also means girls are dating guys outside their congregation, which means they're guilty of the same thing they accuse the men of being. But essentially, the potential down side to dating in your church heavily outweighs the likelihood of success and benefit. Its hard enough to find someone to really make a life with as is.

Other reasons came up in the comments both at YourTango and Volokh Conspiracy where I first saw this, such as the general emasculation of churches and female dominance making it a place guys are uncomfortable spending much time in, and there are at least some who are looking to hook up and feel that if you do so in your own church then you'll eventually be found out. And certainly the smaller your church, the harder it is to find someone you can really make a life with, which forces you to broaden your horizons. Another possibility is that you saw them grow up and remember them more as a kid or how they treated you in the past than an adult now.

But what really stood out, especially at the Volokh Conspiracy, was a repeated theme of suspicion of chastity.
The tone was one of condemnation or at best distrust of someone who isn't sleeping around or is single after a certain age. Such as "I’ve noticed that unmarried men who are a bit older who are still going regularly to Christian churches tend to give off a bit of a gay vibe." and this comment:

I sympathize with your plight, but I have news for you: your Mr. Right has already been married for the last five years. A single guy in his 40s is one of five things:

Basically the presumption is that if you've waited or are patient, you're damaged, troubled, or gay. And a lot of the other commenters (whom I suspect have never darkened the door of a church) declared that the problems were exclusively caused by repressive indoctrination by crazy Christians and that all people want is to get laid, which causes problems in a small group rife with gossip and evil judgmental Christians.

Its a sad, common misconception of reality today to presume that sex dominates the mind and lives of everyone, everywhere, all the time. It might some people, but most I suspect go days without thinking about sex, especially as they get older or are in places you have to work hard just to survive. Some folks are largely asexual, they just don't care that much. It isn't that they dislike sex or are offended by it, but it isn't much of their mindset and they can go their entire life without feeling any particular compulsion to mate.

This is a category that modern society finds unthinkable, broken, or bizarre. You must be psychologically damaged to not obsess on sex. There must be something wrong in your past, what did your mother do to you?? I'd say its the opposite: what happened in your childhood to make you so fixated on sex?

Certainly the need to run down Christians and church so continuously and viciously as some do suggests something inside them is wrong or troubled. Maybe that's something worth pondering if you find yourself tending to do this.
Posted by Christopher R Taylor at 7:58 AM

Well, one doesn't have to be obsessed with sex to realize it is one of the major benefits of marriage. That would actually be a good Common Knowledge article: all jokes and cultural memes aside, married people have more sex than single people, and a considerable amount more.

Perhaps society has been 'bent' that way, 'cause addicts are easier to sell to...