THE SEARCH GOES ON

"Say, you reckon these guys like the government a bit better now they’ve spent two years in jail without bond for Felony Runnin’ Yer Dang Fool Mouth?"
-S Weasel
In March of 2010, the Obama justice department rushed to arrest members of the Hutaree Militia in Michigan. They were charged with conspiracy to overthrow the government and put on trial. Now, looking at these guys, they seem like extras from Justified and you wonder just how diverse their genetic pool really is: 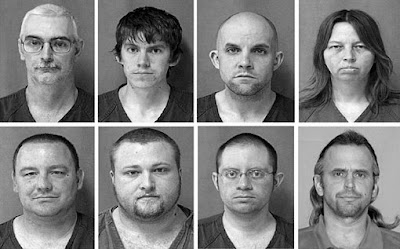 People talk about hoodies and thugs, but guys like this make me move to the other side of the street and I'm a 6'2 white guy. But that doesn't make them guilty of anything. Sure, they are daffy, sure they belong to a militia that thinks Jews took over the government and they have to be ready for a huge race war. Sure they probably have a collective IQ of less than the numbers on your license plate. Sure, they hate authority and local law enforcement. Sure they probably have fewer teeth combined than you do alone.

That doesn't make them criminals or guilty of trying to overthrow the government. And aside from some charges involving pipe bombs and guns, the court threw out everything against them and gently chastised the government prosecutors. After watching video of their rants, U.S. District Judge Victoria Roberts (a Clinton appointee) said:

The court is aware that protected speech and mere words can be sufficient to show a conspiracy. In this case, however, they do not rise to that level.

In short: they were daffy, but not illegal.

And all kidding aside, they probably aren't as dumb, crazy, inbred, and toothless as the stereotype says. If you've seen the show Justified, you've seen a more realistic portrayal of these kind of folks. They aren't any dumber than anyone else, just from a different sort of society and with a different sort of education. Put suits and a 500 dollar hair cut on them and they'd fit in to Manhattan quite well.
But when it comes down to this event, you have to wonder what on earth the Justice Department was thinking by arresting these folks. Yes, they had them on some weapons crimes, but they wanted to bust these guys on trying to overthrow the federal government which is like accusing an ant of trying to overthrow humanity because she bit you.

They didn't try any kind of sting operation, they didn't catch them in the act of planning anything, the militia yelled a lot but never tried to carry anything out. And yet the Obama administration arrested them and tried to convict them on this absurd charge. Why?

That report wasn't so much based on evidence and FBI compiled data as it was presuppositions by the Obama administration. They just knew there were hundreds of these groups out there, and they were booming because they hated a black president. That they were the real threat, and Islamic terror was overblown - if even real - when they wrote this thing.

And they needed an exhibit, they needed proof to support this. So they found some group of hapless militia types and ran them in, jailed them for two years of "speedy" trial. They splashed this on the front pages as proof of the report, they gathered their case and... failed.

They need to find that evil Tea Party terrorist, that white right winger killer. They keep searching and searching, desperate to find the villain they just know is out there, but never quite seem to find. Its not like there aren't any guys like that out there, its just that they are poor, weak, and usually pretty worthless. Even the Klan is pretty much a joke these days. So they struck hoping they had gold but without any real competence or reason. And again, the federal government looks stupid.

And again, they showed these militia types that all the fear they have of tyrannical government out to crush rights without hope of recourse is valid. I think the guys at Ruby Ridge were nuts, but they weren't wrong enough to gun down a mother holding her child. I think the Branch Davidians were idiotic cultists, but they didn't deserve to be firebombed and driven over by tanks.

These militia guys have valid concerns, there are serious problems with a lot of things in the federal government and horrible evils that its gotten away with, particularly when dealing with someone who bucks their power. Its just that their solutions and analysis of why it happens are so wrong and stupid. And they'd be just as bad - or far worse - if put in power.

*UPDATE: This, courtesy Brian Doherty at Reason magazine, is a quote from Tim F at Balloon Juice in 2010 in defense of the arrest of the militia:

The indictment sounds pretty clear: we captured a bunch of religious fundamentalist extremists planning mass casualty attacks against America. Unlike, say, Jose Padilla or any of the clown car gangs whom Bush rounded up this team had the gear and the training to go operational (and kill a lot of people) within a month.

Rightwing antiterror doctrine clearly states that we must strip these “terrorists” (no such thing as alleged in the war on terror) naked and hang them in cold cages by the wrists with their arms tied behind their backs so that the tendons tear and the shoulder joint dislocates. We should waterboard them until they confess and give up their co-conspirators (the Inquisition found waterboarding almost 100% effective!). Without question these people should be held without any trial or access to habeas corpus petitions until the “war” against violent fundamentalist groups is over. At the very least we should shunt these guys into military tribunals where the rules have been rigged to ensure a conviction.

Of course Jonah Goldberg and Glenn Reynolds and Crittenden and Erickson and any other credentialed rightblogger will agree with what I just said. They have to.

Tim was still riding high on Bush dementia at the time, but not the presumption of guilt and the assurance that this was far worse than anything anyone the Bush administration ever arrested someone for, so you have to be a hypocrite unless you call for at least the same treatment. I wonder what he thinks now or if we'll ever find out.

And where do I get my right blogging credentials?
Posted by Christopher R Taylor at 8:54 AM

No one looks good in a booking photo. Notice the matching shirts they're all wearing? They were all just rousted (usually middle of the night), separated, taken into custody, mirandized, questioned, hauled in, strip searched, all possesions seized (except maybe glasses, if they think you REALLY need them), fingerprinted, and then get to have a photo shoot.
If they ask for a lawyer or a phone call, seriously, it's likely tomorrow at the soonest.
I spent a number of years providing 'volunteer' support to the process (woulda been the guy behind the guy behind the guy behind the camera, so to speak), and frankly, if you've not seen it, you wouldn't believe what happens on your way to the courthouse. And then you add the REAL criminals to the mix.
It's mostly done to get some pre-emptive punishment in, and to make an example.
All this for taking to people in an unguarded way about politics.