"I feel as if my rights have been violated" 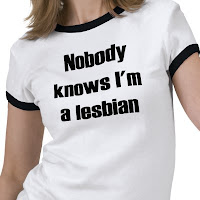 A girl at Lynn County High School in Maine wore a shirt to school reading "all the cool girls are lesbians." She was told by a vice principal to cover her shirt up and not wear it again, because he believed it would be disruptive and violated the school's dress code.

Now, were this not a student at a school, she'd have a pretty good 1st amendment violation case, but schools work differently. Not only are the students under 18 and thus have more restrictions on free expression of their rights, but schools have been given leeway by courts over and over to control students and create a more conducive atmosphere to learning.

However, this does bring up a point about society, law, and culture. The shirt is in poor taste and is either an insult to "cool girls" or an attempt at a statement about how great lesbianism is. The story doesn't exactly make clear what the girl's motivation was but it seems to be the latter. However, that doesn't mean what she did was legally actionable.

I'll shrug at the school saying "don't wear that" because they're pretty free to say what they want at schools. Yes, that even means that they can tell a student to not wear a "Jesus is the answer" shirt. The school ought to have enough wisdom to decide between a shirt with a statement of opinion and a shirt with a provocative statement likely to cause trouble, but you can't really rely on wisdom in school administrators or just about anyone else these days.

However, in a broader context this shows the problem with relying on rules instead of judgment, prudence, and societal pressure. Trying to keep people from doing stuff that isn't particularly wrong but is a bad idea by rules or laws almost always ends up violating some right and will usually conflict with other goals. For instance, this school has a rule against discriminating against anyone "based on sexual orientation" (at least, homosexuality, they'd probably discriminate against bestiality and pedophilia without hesitation).

Yet that rule seems to come into conflict with this shirt. And if a boy came into the school wearing a mesh pink half shirt and hot pants, covered in glitter, he'd probably be sent home - and he'd be able to make a case that he was just being flamboyant in his sexual orientation, and they were discriminating against him.

A proper society with virtuous, wise people would know better than to dress like either example, out of prudence. Its just inappropriate to dress that way at school, no matter what your personal opinions or proclivities are in the matter. And without that personal wisdom - or the pressure from society (peers, parents etc) to help shape young people's judgment, then all that's left are rules.
Posted by Christopher R Taylor at 10:28 AM