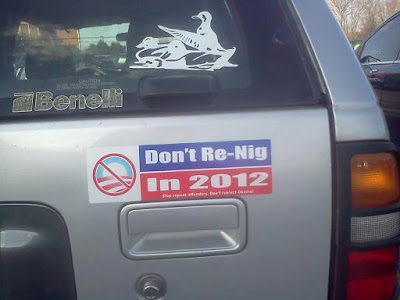 Now, while I understand this person is trying to be clever, this is just horrible. And although I'd like to believe its a photoshop or some trick, I have no doubt there really are people out there who'd think this was funny. Its an unfortunate fact that real racism and bigotry are around on all sides of the political spectrum and its ugly no matter where you find it.

But Obama supporters: this is how racism looks. Its not "disagreeing with President Obama," its not "criticizing the president," and its not "holding a Tea Party Sign I don't care for." Stop using racism as a blanket criticism or criticism of actual racism like this loses its sting.
Posted by Christopher R Taylor at 10:03 AM

I'm not excusing that kind of statement, but in my experience people who say and do things like that are often less racist in their actual behavior than the people who get upset over it, or at least in the ways that truly matter (i.e., hurt feelings vs won't hire you because they aren't comfortable with your ethnicity).

I have a friend who is a bit of a redneck and I absolutely hate watching football games on TV with him, because he will inevitably yell out the old racist refrain, "Run, nigger, run!" and he thinks it is just hilarious to watch everyone get mad at him over it. That's part of his personality... getting a kick out of watchng other people's reactions to his extreme lack of social skills.

But he'd be the first to stop and offer assistance if he saw a person broke down on the side of the road regardless of their skin color (have witnessed it many time... he ALWAYS stops), and I know an awful lot of people who would never use that word but would keep driving after noticing the person broke down was black or hispanic. You tell me which one is more racist.

Yeah, that's a topic for a post all by its self; language, comedy, and statements vs behavior. If you make pollock jokes but help out everyone regardless of their ethnicity, are you really racist? I can't help but think of the movie Gran Torino where Eastwood's character spews racist epithets like Big Red, but doesn't care a bit about someone's actual ethnicity when it comes to action.

Is it me or is "politically correct" drifting badly?