I supposed I'd be remiss in my duties as a blogger if I didn't comment at least a little on the Trayvon Martin case. So here are a few thoughts:
There's just something so very artificial and desperate about the left's response to this, you can almost see their eyes shifting and a slight blush forming when they talk about it.

*UPDATE: you can't tell me this is not deliberate 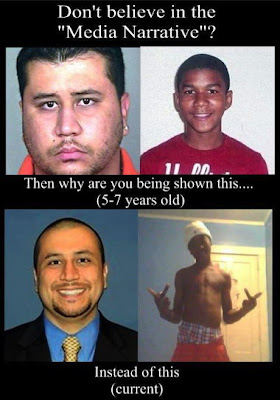 *UPDATE: Apparently the bottom picture of Trayvon is of another fellow named Trayvon, but the point stays the same: the legacy media is using the top picture almost exclusively, even though they know its dated and unrepresentative of young Mr Martin.
Posted by Christopher R Taylor at 8:46 AM

As I'm sure you've seen by now, the lower right-hand photo isn't Martin.
If you're interested in media narratives it seems like you'd want to think about that.

Yeah, I left that up anyway because its in place and I don't like deleting stuff I've posted.

But the point still remains: why use a picture from 5-7 years ago? I think we all know the answer to that.

If you're interested in bringing the truth to light, adding a correction to a post seems like the easy, right thing to do.
Maybe NBC used an old photograph because they didn't have a newer one, and they don't like deleting stuff they've posted.

I think you misunderstand. I'll put up a correction today as I work on my blog, but I leave things up like that to avoid the usual policy in the legacy media of changing a webpage without any notification, trying to hide mistakes. Not out of some stubbornness as you uncharitably imply.