"I asked him to shut down his poison factory and merely made an observation about its combustibility."
-Boyd Crowder 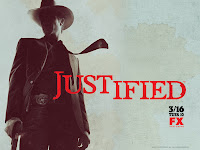 Justified is one of the best-written, best-acted shows on television. The casting is brilliant, pulling in little-known and extremely talented actors who aren't necessarily the prettiest and most impressive but have incredible skill in their craft. The stories are entertaining, the setting seems very true to life, and the main character is very likeable.

There is an aspect to the show, however, that is troubling to me. I was flipping through channels yesterday and went past FX, the channel where Justified is shown. They had a little promo for the show and it was all about how none of the characters were all good or all bad, they all were unpredictable, and they even bragged how there's not really any good guys on it.

And that's my concern. Nobody is good on it. Nobody is all bad, either. Now its not that in real life people wear black hats and are easily identified as to their ethical makeup. The problem is that here really are basically good people in real life and basically bad people. And while the bad guys might show some admirable traits, overall they can be pretty horrible.

In a sense, this kind of writing, while seeming bold and true to life, is pretty lazy. Every single character is likable and interesting at some level, and awful at some level, in essentially equal quantities. Yes, deputy Marshall Raylan Givens tends to be on the side of law, but only out of some sense of it being his job, not out of any naturally decent or just part of his character. And that's true for every character on the show: none of them have a distinct or clear ethical character, they're all interchangably nuanced and gray in their outlook.

And what's worse, Justified shows some of the most evil and horrific things with a flat, documentary approach. Here's what happened. It was neither good or bad, just an event. And there aren't usually any consequences. Raylan can break the law, his chief can torture and threaten to kill a suspect, a girl can almost be cut to pieces to harvest a baby to sell, and the end of the show isn't about how that affects anyone, instead its about some wisecrack or another shot of Raylan in bed with another woman you don't particularly care for.

That's kind of annoying, because you're really left with no one to cheer for. And the characters you get to like will inevitably, always do something really awful eventually to make sure you don't like them too much or so the writers can feel comfortably "balanced" in their outlook. See how realistic we are? Everyone is horrible... and good!

But in real life people aren't like that. Some are, some aren't. Some are more good, some are more horrible. And that causes problems for my enjoyment of the show. Last season, the second year, was particularly frustrating in this aspect. You couldn't really find anyone to like or appreciate. Even the little girl was a drug dealer. No one is good, not really.

And for such a Southern backwoods place, there's virtually no faith or religion in the show either. Yes, one of the bad guys flirted briefly with Christianity, but everyone down there tends to be Christian and church-going, an aspect they really brush over and tend to ignore. Even the people who are atheists tend to be strongly informed by a Christian worldview and go to church meetings, its just part of the culture.

So while there are aspects that seem deeply realistic, the whole ends up being sort of a weird, murky alternate reality version, like Deadwood was of the old west. Some of it very gritty and plausible, historical and reasonable, some of it so stylized and imposed on the setting it was odd to watch. Its like watching a Shakespeare play of a historical event; yes its entertaining and well written, but people didn't actually talk like that and the situations were never that specific and stylized.

So for me Justified is a mixed bag; its entertaining, but disappointing all at once. Its almost better as a show you watch an episode of once in a while instead of regularly.
Posted by Christopher R Taylor at 7:14 AM

I tend to think of Raylan as being a pretty clear good guy on the show (although certainly a bit of a man-whore). One of the themes that the show commonly explores is how the law can actually prevent justice from being carried out, and so when Raylan (or his fellow Marshals) breaks the law in pursuit of justice, he is actually

The takeaway lesson isn't that good and bad don't exist, or even that the line between them is blurry, it's just that the same action can be good or bad depending on the circumstances and intent behind it. "Good" does not always equate to "legal" or vice versa.

So there is good and bad, it's just that sometimes they are portraying "the law" as being in cahoots with the bad guys.

My biggest problem with the show is that my wife gets a little bit TOO excited about watching it... just like she did with Deadwood... and just like she does with any other show with Tim Olyphant in it... hmmm....

sorry, the last sentence in the first paragraph above should have ended with, "clearly performing a 'white hat' action."